The Southern Companion and Think Country 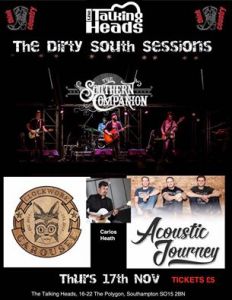 This was the 2nd of the Dirty South Sessions, the 1st one wasn’t particularly well attended, but it was a Tuesday evening, this one was on a Thursday and there were definitely more people there this time. Darren Hodson (Lead vocalist the Southern Companion) his wife Sally and Annette Gibbons (Think Country) are trying to get these events to be a regular occurrence & I for one am very happy about this idea. Talking Heads is becoming a good venue for UK Country music, ever since Jess & The Bandits played there in June of this year.

There were 4 acts playing this evening & I was very curious about 3 out of the 4! Read on to find out why!

First up was Carlos Heath. He took to the stage & commented that it felt really odd to be centre of the stage and on his own. Carlos used to be one half of Southern Junction, but the other half, Katie Jayne, had to return to her native Australia a few months ago and unfortunately they took the decision to end their journey together and to now go their own ways. Inevitable really with the distance involved! I was really sad when they announced their split as I had got to know the guys quite well, even seeing them perform 3 times in the space of 8 days (uber fan or super stalker!! Lol!!) So I was really curious to see Carlos on his own. Happily I was not at all disappointed. He only did a short set and confessed that he really wasn’t feeling very well, he had quite a bad cold. It didn’t come across like that, he sounded great. He sang a couple of new tracks, including one he doesn’t have a name for, could we come up with a name – this sounded familiar, as there is a track on the 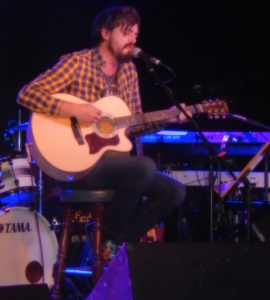 Next up was Acoustic Journey, the subject of my 2nd curiosity. Again, I have got to know these guys quite well & have seen them perform several times, but they are expanding their sound and they now have a 4th member, a bassist – James Archer. As a result the name Acoustic Journey is going to disappear and the name Journey Home will replace it. This was to be my 1st time seeing the guys with James, hence my curiosity, this was further heightened when I was let into a secret & Lewis Rogers told me a couple of weeks beforehand that he was going to be playing keys with them on this night too. Talking to Ben (Guerney) before the evening started, he said they had sent the music across to Lewis via email & Lewis had practised it, they hadn’t actually played together! The trust these guys have is amazing. Admittedly, they all know each other really well & Lewis was playing keys at the after party on the Saturday as FSA Fest with Ash Cooper Band, but they had full trust in Lewis that he would be in tune & in time.

They stared with Drive and it sounded flipping great, it is a much richer & fuller sound. Jonsey then introduced James and Lewis and explained that they were expanding, they also joked about Andy Sammons progressing to the full drum kit (he currently plays the Cahon drum, with a tambourine on his foot!) Trucks & Whiskey & County Lines followed. Jonsey then told us there is new music coming our way next year, a new EP is in the process of being recorded. A song from this followed which was prompted by Jonsey buying a new car, a Golf GTi. Ben came to look at it & his 1st comment was “Yes, but it isn’t a truck is it?” The 2 of them decided no it wasn’t, but there was a song there, hence Truck! 2 more from their existing EPs finished their set. 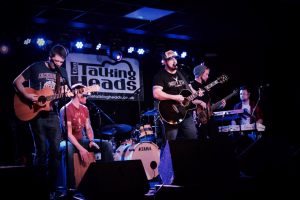 Now, I am not good with change & when Jonsey told me Acoustic Journey were expanding and as a result they were going to have to change their name, I wasn’t particularly happy, but having now heard them, I hang my head in shame, I should have had more trust in them, the bigger sound does really suits them. It was also good to see their manager from Real Good Records, Mike Jones, out with them as well.

Next up was the 3rd object of my curiosity, a band called Clockwork Carosel. These guys come from the New Forest, but I have never heard of them before, I was surprised as I know of quite a few bands down this way, but these guys haven’t appeared on my radar at all. They are a 5 piece band, although there were 6 of them this evening and boy were they good. They are obviously really good friends as there was quite a lot of banter going on on the stage. As far as I am aware all the songs they sang were originals, they didn’t sing any covers. The lead singer, Martin Gregory also played guitar and occasionally the harmonica, the keyboard player Drew Flanagan also provided vocals & drums, although not at the same times as he was on keys!! Ben (Garth) Finlay was the 1 who really impressed me though, he started playing the mandolin, then swapped to a guitar, then swapped to a lap steel guitar, then back to the mandolin! Very talented! They haven’t released any music yet, they are working on their debut album, if tonight’s performance was anything to go by, it should be really good. 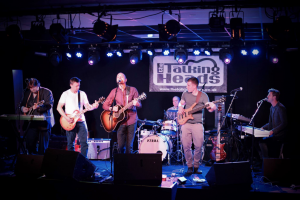 Finally it was the turn of the Southern Companion, sorry, I must correct myself, finally it was the turn of the double BCMA Award winners the Southern Companion! At the recent BCMA Award ceremony they won the Horizon Award 2016 and Album of the Year for 1000 Days of Rain (which has certainly been my personal album of the year!) They started their set with The Leaving Kind and Feels Like years & then a Jason Isbel cover If It Takes A Lifetime. Darren said the next song was a bit tongue in cheek as they all had the winter lurgy (I was beginning to wish I had brought a supply of Echinacea with me with all these Man Flu germs floating around!!)

He then said that they had spent the day in the recording studio and that a new album is in the process of being recorded! The next song was from it & Darren stressed that it was a fun song & wasn’t to be taken seriously at all Girl on my Strings. It was a fun sounding number and again gives promise to the next album being as good as the last! They performed their superb cover of Chris Stapleton’s Tennessee Whiskey. Son of a Bitch and a cover of Ryan Adams Firecracker with Lee Maycock (keys) playing the harmonica finished their set. It was a real treat having 4 acts, but with each act you were left wanting more! 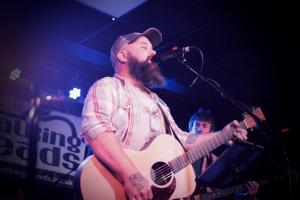 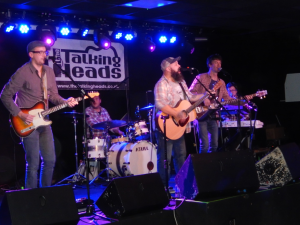 All in all another very good evening of UK Country music down here on the south coast. I would really like to see these evenings grow and more acts become involved, but more to the point, more people come to watch. The acts are not going to come if the audience doesn’t. We also had a couple of girls who were line dancing for a few of the numbers, that was great to see. I would also like to thank Andrew Jones for allowing me to use his photos, I really am not a very good photographer & I appreciate him allowing me to use his!