Acclaimed for earlier albums inspired by the almost mystical connection to her birth family and the music of rural Tennessee, Diana Jones is known for giving voice to dispossessed people from the past. Song To A Refugee, released on September 25 on Proper Records, finds Diana looking into the wider world to shine a light on current issues close to her heart.

Produced by Grammy Award winning producer and musician David Mansfield, who also plays multiple instruments on the record, special guest artists on Song To A Refugee include Richard Thompson, The Chapin Sisters, Jason Sypher on bass, Glenn Patscha on piano and Will Holshouser on accordion. The single “We Believe You” was added lastly with the help of Steve Addabbo (Suzanne Vega, Shawn Colvin) producing and guest artists Steve Earle, Richard Thompson and Peggy Seeger each singing a verse, Mark Hunter on piano and Joe DeJarnette on bass.

The first single, out on Friday 17 July, is a double A-side featuring “Humble” and the non-album track “I Can’t Breathe”.

“After surviving a gas leak in my apartment and being sick for a year, the song Humble came to me. I was deeply in touch with my own and our shared vulnerability, how we make our plans and life changes those plans, sometimes in an instant and yet we keep trying.”

About “I Can’t Breathe” Diana says:

“On July 14, 2015 Esaw Garner, wife of Eric Garner spoke out about the settlement she was to receive for her husband’s murder at the hands of New York City Police. The song I Can’t Breathe came to me as eleven church bells rang for the eleven times Erica Garner repeated these words before he died. Five years later on May 25, 2020 George Floyd spoke the same words as he was being murdered by Minneapolis police officer Alex Kueg. I added the word “daughter” to the song for Breona Taylor, innocent and murdered by police in her own home March 13, 2020. It’s time for accountability and change for racist practices in the USA and around the world.” 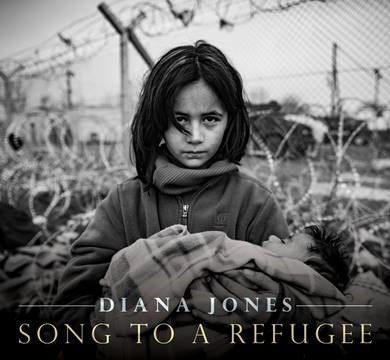 The story of how the album came about really begins in 2016-17 when Diana was recovering from a serious illness caused by a gas leak in her apartment. Although her health was improving, artistically Diana felt at a loss. She had written no new songs due to her illness and she felt overwhelmed by the prevailing political environment. Diana found the harsh realities of what was happening at the US-Mexican border particularly distressing; scenes of mothers separated from their children resonating with her own experience of being adopted.

She explains “The devastating election of 2016 had left myself and many of my artist friends unable to respond creatively. During the spring of 2018 I landed back in New York after a tour with no new songs. I had admired Emma Thompson’s work as an artist and a humanitarian forever. After randomly bumping into each other twice in a park near my apartment we had a long lunch and Emma told me about her work and her work as president of the Helen Bamber Foundation. I don’t think anyone could have called me out of my writer’s block the way Emma did and I began to write the stories that I found so devastating, one voice at a time. My own need to “re-humanise” the people who were being de-humanised by governments and the press resulted in a flood of songs.”

The resulting song cycle Song To A Refugee artfully considers the times we live in, speaks for those often without a voice and encourages a humanitarian response. One of the record’s strengths is Diana’s ability to inhabit the characters about whom she is writing, from the woman walking miles to the US border carrying her child, to the young children separated from their parents fleeing their homeland, giving an immediacy to their stories whilst illuminating the more generic themes within.

Diana continues, “The work has everything to do with my own need to connect with others around this important issue. At concerts I invite a spokesperson from a local refugee organisation to speak during the intermission and the audience can ask questions and find out how they can help. I’ve watched people get involved immediately.”

Award winning, US singer songwriter Diana Jones is known for her gritty, literary, Appalachian influenced songs. Adopted as an infant and raised in Long Island, NY, the fact that Diana couldn’t get enough of her brother’s Johnny Cash records finally made sense when she found her birth family and musical roots in the Smoky Mountains of Eastern Tennessee. Her maternal grandfather, who had formed his first teenage band with a young Chet Atkins, was happy to pass on the culture and the music that he loved to his granddaughter.

Diana’s first album ‘My Remembrance Of You’ (Proper Records) in 2006 garnered rave reviews internationally and set her on a path which would see her release four further critically acclaimed albums: Better Times Will Come (2008), High Atmosphere (2011), Museum Of Appalachia Recordings (2013) and Live In Concert (2016). She has toured the globe, including performances at prestigious events such as Cambridge Folk Festival, Galway Arts Festival, Levon Helm’s Ramble in Woodstock, NY, and Bimhuis in Amsterdam, and shared stages with the likes of Richard Thompson, Janis Ian and Mary Gauthier.  She has also appeared on world-renowned TV and radio shows Later With Jools Holland, BBC4 Folk America, BBC4’s Songwriters Circle and BBC Radio 2 Country with Bob Harris. Diana’s progressive, yet historically rich, songs have been recorded by artists including Joan Baez and Gretchen Peters and have won her awards from Kerrville Folk Festival, New Song Festival and nominations from International Folk Alliance.

Song To A Refuge (Proper Records, September 25 2020), Diana’s 6th solo recording, gives voice to the stories of asylum seekers worldwide; a testament to Diana’s commitment to social justice through her gifts as a consummate songwriter and performer.