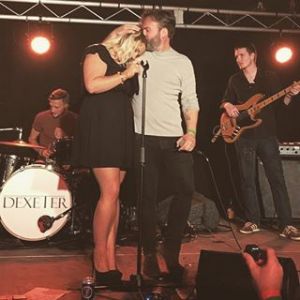 It is a fact of life that bands break up – The Beatles, Spice Girls, One Direction.  On Saturday night Gareth Thomas did a Robbie Williams/Take That, when he parted company with Dexeter.  Gareth and Deeanne Dexeter started together as a duo, then moved forward into a full band (the members of whom have changed several times over the years), but now new challenges beckon Gareth and onward he must go.  Their headline slot at FSA Fest was to be Gareth’s final show with Dexeter.  We all knew it was going to be a tough performance for everyone involved, not sure I completely appreciated the impact it would have on the audience as well!!

There was a very subdued atmosphere as Gareth & the band came on & started sound checking, it didn’t feel like the atmosphere of a Saturday night headline act at all.  Dee came on (wearing the most fabulous very high heeled sparkly shoes) and the show started with Try, which went seamlessly into Luke Bryan’s Country Girl (Shake it For Me).  It was the usual high dynamic start Dexeter fans are used to.  After Nashville You & Me, Dee tried to say something but she just couldn’t, it was so obvious she was struggling to hold it together.  This started to have an effect on the audience as tissues started being passed up & down the front row!  For me I found it difficult to look at Dee, her eyes were glistening with tears & it was so obvious!

Gareth took over & said that they had been together for 7 years and were celebrating their time together and the friends they had made and had supported them.  He then called for Andy & Sarah Webb to come forward sit on some hay bales right at the front of the crowd barrier and they sang Weight of the World, a song inspired by the Webbs, directly to them.  When the song was finished, both Andy & Sarah had red rimmed eyes!

There was then a slight relief in the tension when Dee complained about beer spilt on the stage, something she blamed on ‘Gazza Quizza’ – Gary Quin, who had proceeded Dexeter.  I Hope It Hurts was next, followed by a song I didn’t know & am not sure what it was called & then straight into Waiting For A Lifetime.  By now Dee was singing, holding on to the microphone stand and looking straight ahead, slightly upwards, careful not to make eye contact with anyone.  Even Gareth had started to wipe his eyes.

Dee asked Gareth if he was sure he wanted to leave, which is when Gareth finally told us why he was leaving.  He said in about 4 weeks time he was travelling to the Caribbean to work with Jess Roberts, who he referred to as his beautiful life partner, so they can play songs to ‘Big fat American tourists’, whilst enjoying the sunshine!  They were then told by a guy at the side of the stage they only had 10 minutes left, Gareth sounded surprised.  The timings on Friday AND Saturday left a lot to be desired.  Friday ran very late which ended up with Laura Oakes set getting cut short and Jess & The Bandits set being basically cut in half!  Dee said that in 10 minutes they could do at least 3 songs.  Gareth said they were going to do their best & push on through, he couldn’t believe their last set ever had been cut short.  They went into Meet Me There, Dee said “Please sing along, I am going to cry!”  Before she started singing Dee said something along the lines of “Sod this” & kicked her shoes off, she then jumped down off the stage & walked along the front of the stage, with her microphone.  When she got back on stage she said “That was pretty awesome!”

The shoes went back on for a very emotional version of Lady Antebellum’s 747, during which Gareth put his guitar down and sung with his arm around Dee, she chocked up and really struggled to sing her part.  At the end Gareth said “I could use a drink right now, I really could!”

The show wasn’t over yet though and Not Giving Up Tonight followed.  The way Dee was managing to hold it together when she was so obviously distressed just goes to show how professional she is and smacked of ‘The show must go on!’  The crowd were yelling for more.  Andy Webb walked on stage & said “There is no way we are stopping this!  We can carry on with the After Party, but Wayne had decided “F**k it, carry on, we have got another 10 minutes!”  This was met with HUGE applause & rightly so!  As if this wasn’t an emotional rollercoaster already!

They sang a Rascal Flatts cover – What Hurts the Most, with the crowd joining in with gusto and then went straight into their final song, Older (Wouldn’t Change a Thing) which seemed a very fitting end.  Dee’s make up was by now all over the place, Andy had handed her a tissue, but it didn’t really help and when the song was finished both Gareth and Dee made a quick exit stage right!

It had been an extremely emotional gig, I don’t ever remember crying at a gig before, but I haven’t been to a last gig of any sort before, & I am a right softie, I cry really easily.  When I was a kid my dad used to call me Helen Melon, except if I was watching a film, then it was Helen Watermelon!  In the toilets after the show I wasn’t the only female in there trying to rectify red eyes!

I am sure I am not alone in wishing Gareth & Jess all the luck in the world with their new venture, but I hope even more so that Dexeter can continue and we will still hear new music from them and see them on the road!