Darius Rucker: When Was The Last Time 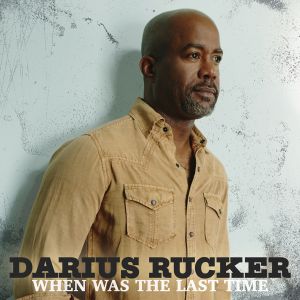 As a huge fan of Darius since his Hootie days, I jumped at the chance to review his fifth album “When Was The Last Time”.  On first listen I wasn’t disappointed and I thought, “here is Darius just being Darius and doing what he does best, giving us all an album full of upbeat feel good southern living songs,  great anthems which will be amazing at a live show.  However on later listening’s I realised that this album is so much more than that.  Although upbeat and fun, the lyrics and content are meaningful and exactly what we all need to hear right now.

The album opens with “The Last Time” all about taking chances, trying something different and just going for it which was exactly what Darius did when he worked with Ross Copperman on this album.  This was Darius’ first time teaming up with Copperman and in my opinion it results in a much fresher upbeat feel.

In keeping with that theme but calmer and more reflective, “Twentysomething” has the same sentiment of Luke Bryans “Fast” with heartfelt lyrics about the passing of time, something we can all relate to.

“Straight To Hell” is one of my stand out tracks on this album.  It’s a brilliant cover of a Drivin’ n Cryin’ song which was a hit in the 80’s.  Darius brings Jason Aldean, Luke Bryan and Charles Kelly along for this one and the result is a loose relaxed jamming session sound, with every performer sounding like they are having a ball! I think this song will be another “Wagon Wheel”…..someone else’s song which Darius transforms into one of his best known anthems.

Following straight on from this is “Count The Beers” a fun light-hearted song about how he may not be with the love of his life but “she don’t count the beers I drank at night”.  It’s a great track to follow “Straight To Hell”.

“If I Told You”, which is already a well-known hit, has really vulnerable lyrics about feeling unworthy and unlovable if you show the person you are with the “real you”.  These are delivered in the raw intense way that Darius is so well known for and it gets to you right in the gut with its very relatable words.

“Hands On Me” shows a new side to Darius.  We’ve had the soul wrenching romantic songs from him before but in this song he somehow uses a gospel sound to show a (blushing slightly as I write this)……sexier side to him.  It works and I love it!

The last song on the album “Story To Tell” seems to summarize how Darius feels about his life at this time, all the good times, the difficult times and those everyday times that have resulted in a brilliant story to tell and this album seems to tell it so well.

It’s such a positive, encouraging album with each lyric urging listeners to grab life by the balls and make the most of every minute, learn from your mistakes and appreciate the fun!