Dan + Shay may seem like your typical Country – Pop duo but in reality, they are so much more! With flawless vocals, fantastic writing skills – this duo have more than made their mark in Country Music and it is easy to see why!

Dan Smyers and Shay Mooney are signed to Warner Music Nashville and released their first album Where It All Began in 2014 following the success of their first single 19 You + Me which was released in late 2013.

Only meeting in 2012, the pair’s first song written together was placed on hold for Rascal Flatts, which is amazing for any songwriter at any time, let alone on your first ever song. Two months later, Dan + Shay were signed.

Whilst Where It All Began is a great album – Obsessed offers so much more. Upon my first listen, I noticed the songs in general were much more memorable and whilst catchy – they were also of a more mature standard which we would expect on a second album. I think this album in particular will reach a broader audience. 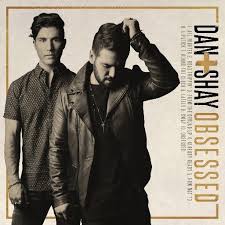 The first single – From The Ground Up – is such a beautiful and meaningful song about building a life with someone – that I think most people will relate to this song. This song is a stunning Ballad with flawless vocals, especially from Shay who takes lead vocal.

The rest of the album consists of many equally fantastic songs with a mix of ballads, upbeat summer sounds and vocally challenging Country Pop songs with a twist of Soul and R&B.

Stand out tracks for me would be Already Ready, From The Ground Up, Title track Obsessed and Up beat tracks  All Nighter and Road Trippin.

There is not a bad song on this album at all, I am yet to skip a track. Dan + Shay’s vocals fit so well together that they make the perfect harmony. Certain songs sound of similar style to Hunter Hayes and Jason Mraz, in particular the song Obsessed reminding me of an early Mraz from his Mr A to Z album days.

You will definitely find yourself rolling down the windows in the summer heat to songs All Nighter and Road Trippin and singing obnoxiously loud without a care in the world and feeling pretty darn good about it.  This album delivers a real mix of emotions and they pull at your heart strings both musically and lyrically.

More mid-tempo tracks such as Round The Clock and Lipstick are not particularly catchy but that doesn’t matter as not every song needs to be catchy to be good or memorable at all. Both songs are fun, and I can see both being released as singles.

Lately and How Not To – have a bit of a R&B feel to them but Countrified, both equally great tracks with nice melodies and harmonies.

Sway – my least favourite track but not a bad song by any means. The album has so many great songs that there had to be one that escaped my memory a bit and unfortunately it was this song.

Overall, a fantastic album with many feel good tracks and ‘fun lovin’ catchy tunes. The songs are well written and it’s worth really listening to the lyrics especially on From The Ground Up. I can imagine that a lot of these songs sound amazing live with a full band and acoustically. I am yet to see Dan + Shay live and they have just announced that they are heading to the UK this September. I personally cannot wait and hope to see them in London and Birmingham, lets hope I manage to get tickets before they sell out, fastest fingers first ha!

You can download the new album Obsessed here : Obsessed by Dan + Shay

And tickets to the UK tour can be bought from Wednesday 15th June here: http://m.axs.com/uk/artists/251696/dan-shay-tickets

What country means to me