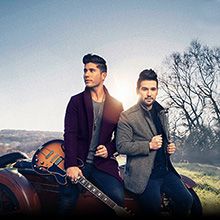 London’s Bush Hall was the perfect venue for the final stop on Dan Smyers + Shay Mooney’s sold out UK tour. The duo started their set with ‘What You Do To Me’ followed by ‘Show You Off’ and from the first note, it was clear that it was going to be an epic night.

The set included songs from both of their albums – 2014’s ‘Where It All Began’ and their latest release from June this year ‘Obsessed’, as well as a couple of cover songs. I loved that the cover songs chosen were not from the country genre, as it allowed them to put their own twist on each of the songs.

Dan + Shay travelled to the UK armed with just an acoustic guitar – no band or flashy stage set-up – and that was all that was needed. The acoustics of Bush Hall only added to their stunning vocals. They improvised with the occasional 80’s style guitar riff or beatboxing through the mic, and shared anecdotes of their train journeys between each venue around the UK between songs.

The setlist was changed on each night of the tour, and we were treated to ‘Lipstick’ from their Obsessed album, which hadn’t been included elsewhere. From the start of the night, we were encouraged to singalong if we knew the words to each of the songs and that we did. It’s not the first time i’ve seen an artist come across to the UK and look completely overwhelmed that the audience knew the words to their songs.

They finished the set with my 2 favourite songs back to back, ‘Nothin’ Like You’ and ’19 You + Me’, complete with another crowd singalong. After exiting the stage to a rapturous applause and promising to come back as soon as they could, they then took the time to meet and take photos with everyone afterwards. I can’t wait for them to come back!

Dan + Shay’s current single ‘How Not To’ drops to country radio on Monday 26th September.