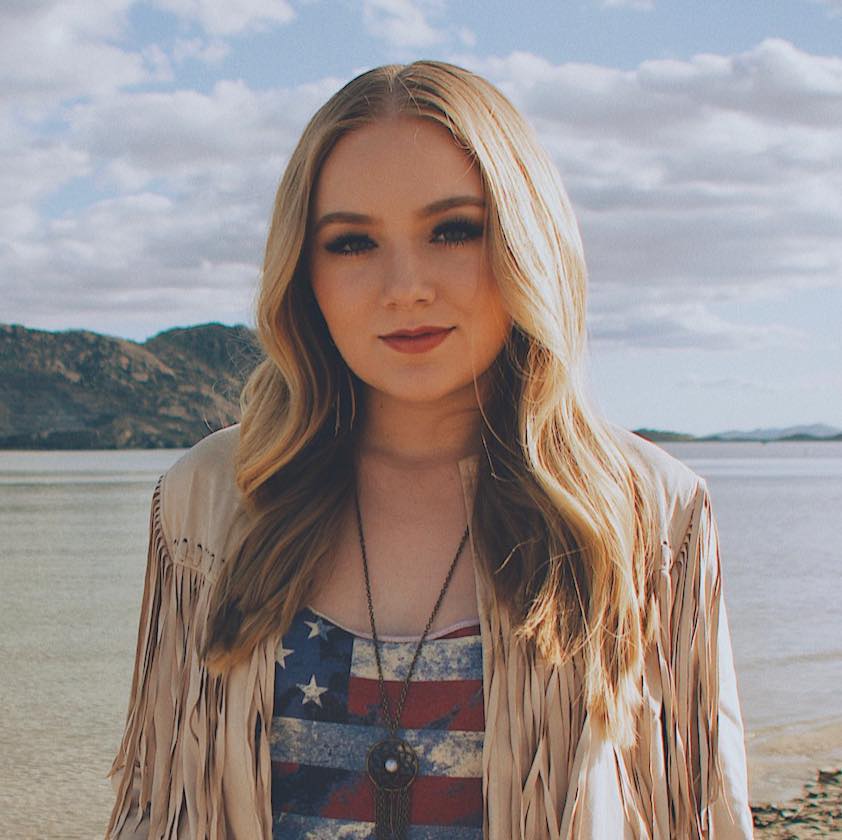 Southern California‘s Kylie Trout is a rising country music star and after my CRS 2021 Zoom chat with her, I feel confident that she’ll continue to move forward with success.  This young artist has her priorities in order and her head on straight.  She knows what she wants and she understands what it takes to reach her goals.  Listen in to our interview right now.

Patti McClintic:  Hi Kylie, how are you?

Patti McClintic:  I don’t know if you remember me, but we’ve talked with you before at CRS at the Omni.  Of course, Annette (Gibbons) was there too, and she’s more British than me and more fun to talk to than me, but here we are, talking through a screen.  So, how are you doing?  I am blown away by your music.  I’ve been listening to your latest single, “Can’t Be Lonely,” and it’s just, “Wow!”

Kylie Trout:  Oh, thank you.  That means so much.  I’m doing well, how are you doing?

Patti McClintic:  I’m doing well, but I’m sick of this snow.  Where is this snow coming from?  I’d like to send it back to wherever it came from.

Kylie Trout:  Where are you at?

Patti McClintic:  I’m in Nashville.  You know, I moved here six years ago from New York to get away from this and here it is.  I don’t know what it’s doing here, but I hope it goes away soon.

Kylie Trout:  I couldn’t handle that.  I’m too “California” for that.  I could not do it.

Patti McClintic:  I can’t either, but hopefully it all melts soon.  So, yes, you are from California.  Why don’t you give a brief synopsis of who you are and where you’re from for the people that aren’t yet familiar with you.

Patti McClintic:  I’m on that stupid cusp where I don’t always know what I am.  I’m like both, I guess.  Depending on my mood I can lean toward one or the other.

Kylie Trout:  Well, happy birthday to you too.

Patti McClintic:  Thank you, wow, that was a coincidence!  So, you’re going to be 18 on Saturday.  That’s a big birthday.

Kylie Trout:  Yeah, I’m super excited about that.  So, a little more about me, I’m born and raised in Southern California.  I actually grew up with my grandparents until I was eight, and they introduced me to country music and I fell in love with it.  It helped me get through a lot growing up and I was just always able to relate with the stories that country music tells.  That’s why I love it.  I always knew I wanted to do country music because I wanted to tell my stories and hopefully help other people along the way, that’s always been my goal.  I’m graduating high school this year and just continuing my music career, and seeing where it leads me. 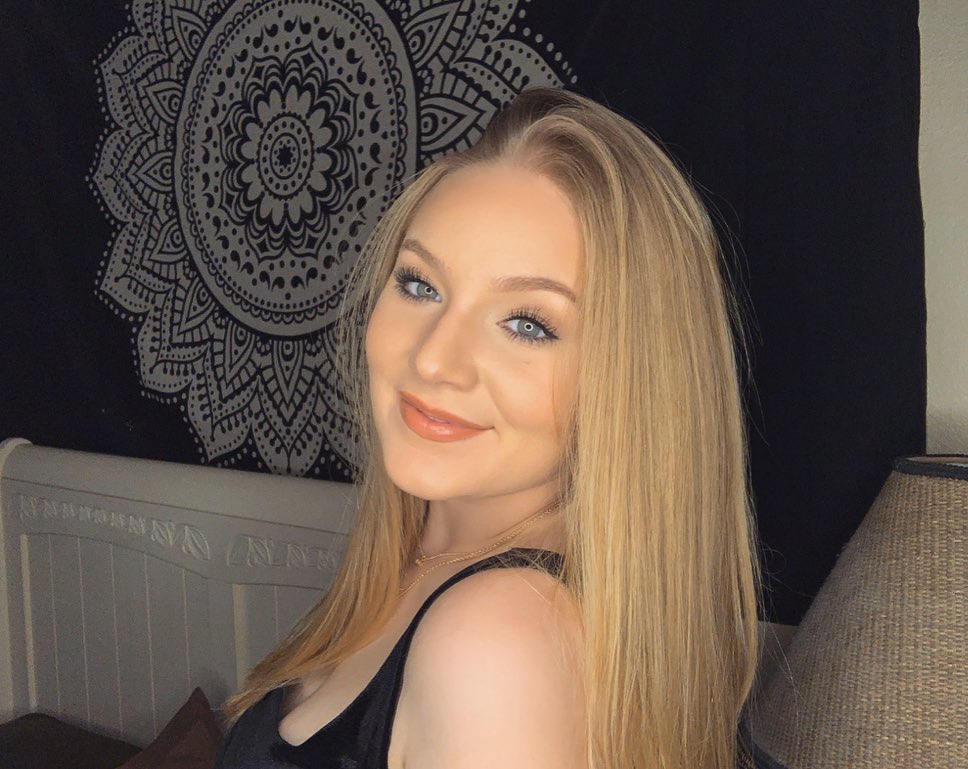 Patti McClintic:  Very exciting.  So, tell me about this latest single, “Can’t Be Lonely.”  It’s so delicious!  You know, sometimes you have to listen to a song a couple times and then you kind of get it, not so with this song.  I was blown away.  I thought to myself, “Wait a minute.  Is this the same Kylie Trout that we talked to, like, two years ago?   It’s just so great!”  So, tell me about the song.

Kylie Trout:  Oh, thank you so much.  This is a song about just another ex-boyfriend that did you wrong.  (Laughs)  I like to write from personal experience and this song is definitely a personal experience.  I had the idea of writing one about this guy who, it’s like when you start to realize your worth and this guy obviously just can’t be lonely, and he can’t stick to one girl, and you deserve better than that.  I wrote this over quarantine.  I wrote it with Willie Morrison who’s a great songwriter and singer.  He’s freakin’ awesome, super fun to write with.  So, we just kind of knocked this song out and we were like, “This has got a good feel to it.  This could be something good.”  Then I brought it to my producer and he was like, “This is awesome.”  So, it was just a good feeling all around.  It’s funny because I didn’t have a set date or plan on releasing it, and I actually posted it on Tik Tok.  I had never really been a Tik Tok fan until this song, like, blew up.  Then I was like, “Oh, I love Tik Tok now!”

Kylie Trout:  Exactly, and a bunch of people reached out to me and they were like, “This song made me find my worth and realize that I’m worth so much more, and I deserve so much more than letting guys walk all over me,” which you should never do.

Patti McClintic:  Right.  Good for you.

Kylie Trout:  Yeah.  That’s what I really wanted to convey in this song and some of my other songs, that confidence.  So, it’s gone good.

Patti McClintic:  That’s good to see in a 17-year old girl, that you have that confidence.  That will just continue to grow and you’ll bring that with you for the rest of your life.  You won’t get stepped on like so many other people have done.

Patti McClintic:  I even posted it to the Think Country socials and asked people to listen to it and comment what they thought.  They really think it’s great.

Patti McClintic:  Obviously quarantine has made life a mess for live shows and music in general.  Aside from Tik Tok, which worked out well for you, and many other people actually, what else is going on with you?  Do you have any kind of a plan for 2021, or are you just sort of in a holding pattern?

Kylie Trout:  Quarantine gave me a lot of time to take a step back and find myself again and write a lot.  Actually, I learned guitar over quarantine so that was pretty helpful, and just a lot of writing this year.  By the end of the year I really hope to put out my first EP, or at least a bundle of songs to show everybody more of who I am.  So, I’m really looking forward to that, as well as some music videos and more merch coming out.  Last year was kind of, “Let’s regroup, let’s get everything together.”  This year it’s, “Let’s hit the ground running.”  So, we’ll see.

Patti McClintic:  It’s good that you had that year.  A lot of people took the year to make a plan or just write their faces off.  There’s going to be so many new songs.  Somebody said to me yesterday that the Spotify servers are going to just blow up because there will be so many new songs.  In March and April there’s so much coming out.  When you’re not doing music what do you do to keep yourself occupied and interested in life?

Kylie Trout:  Honestly, I’m pretty boring.  I like to hang out with my family mostly.

Patti McClintic:  That’s great.  Nothing wrong with that, and really, if you like hangin’ out with your family, that’s useful right now.  Some people can’t do it and they have to.  (Laughs)

Patti McClintic:   Co-writes.  Obviously you’ve written with Willie Morrison who’s a very talented guy.  Is there anybody that you’d like to write with that you’ve yet to have the opportunity to do so?

Kylie Trout:  Oh, there are tons of people, tons.  Honestly, I’m the kind of person that, I’ll write with anybody, you know, I’ll talk to anybody.  I love talking to people, writing with new people and meeting new people.  I feel like quarantine has really brought that out of me.  I feel like before I was more quiet, and now I just talk my head off all the time, so I apologize if I’m talking too much.

Patti McClintic:  That would be a dream, wouldn’t it?

Patti McClintic:  Also, are you a California girl for life or do you have a plan to someday move to Nashville?

Kylie Trout:  You know, I’ve never really seen myself as a “California girl,” I guess.  I don’t really like being in the city, I guess.  I’d love to live in Tennessee.  I took a trip out to Kentucky with my family one year and it’s just beautiful out there.  In California everything is so fast-paced, but then you get out to the south and it’s not like that.  People are so much kinder out there.  I would love to live out there one day for sure. 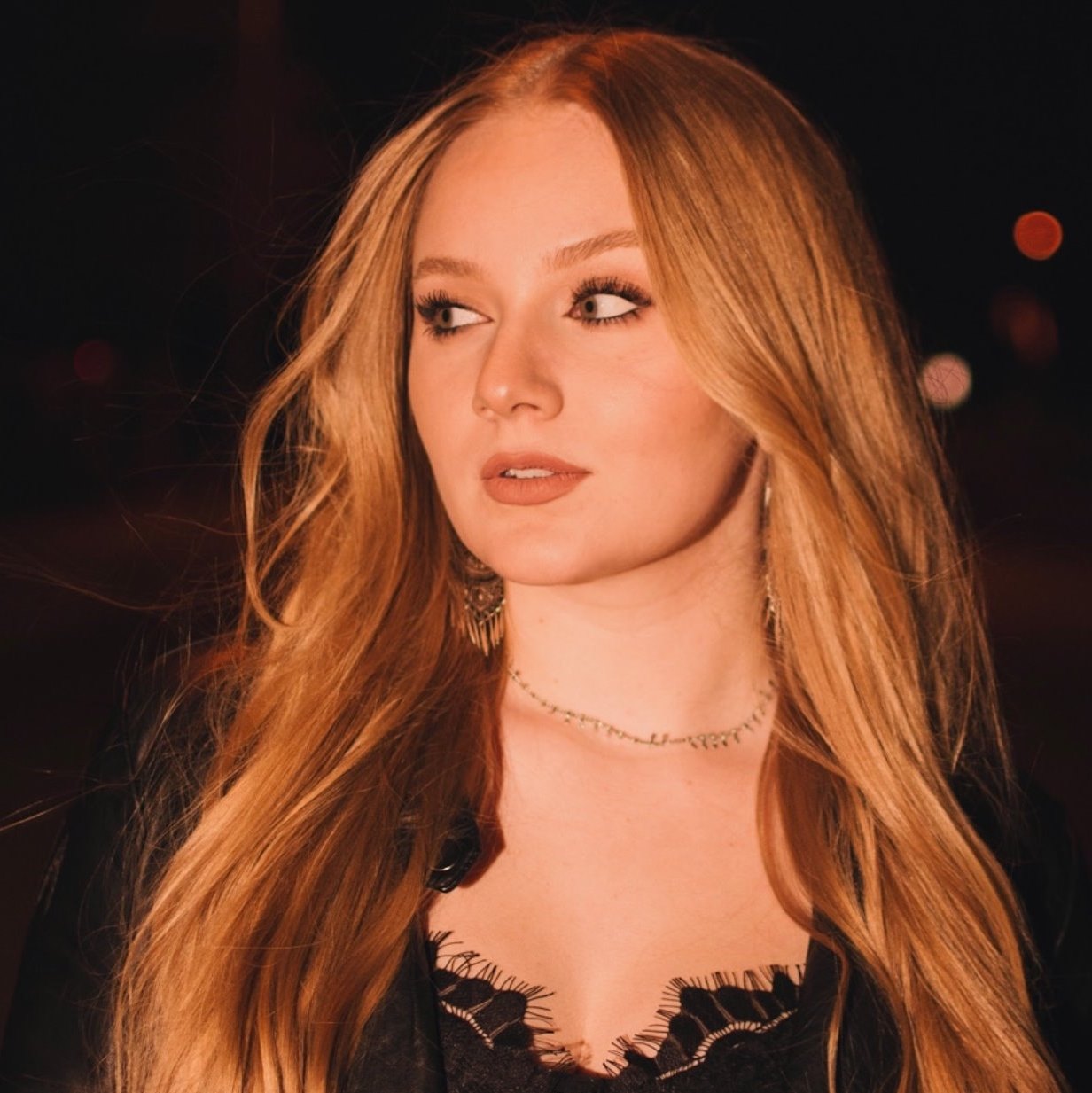 Patti McClintic:  The card says, “Considering all the big screen movies that you have ever seen, which one do you believe had the greatest emotional impact on you?”

Kylie Trout:  Okay, I love the movie, A Star Is Born.  I cried during that movie.  I actually watched it on the plane flying to Nashville.

Patti McClintic:  That’s a great movie, and it doesn’t matter which version you watch, there’s like three or four different versions, they go way back, and then right up to the most recent one, and they’re all good, every one of them.  So, that was a good answer.  Other than that, we’re done.  I’m really looking forward to your new stuff because I really like what I’m hearing.

Patti McClintic:  Thank you, and I love your background by the way.  (She had purple walls with lights behind her.  It was pretty cool.)

Patti McClintic:  My background isn’t as cool as yours.  The cat was back there before.  Is he still there?  Can you see him?

Kylie Trout:  Yeah, I thought I saw him. (Laughs)

Patti McClintic:  So, yeah, the cat was my excitement but it wasn’t as cool as yours.  Have a good day and happy CRS!

Kylie Trout:  Thank you, you too!

So, there you have it.  This girl is smart and she’s one amazing songwriter.  Just give that single a listen and you’ll see what I mean.  I love her attitude.  She’s confident and intelligent without being self-centered.  She would absolutely do well in Nashville and I hope she gets here someday.  I can imagine her writing great songs with with some of the best in the business.   Give her a follow on all of her social media sites (links listed below) and make sure to mention that Think Country sent you! 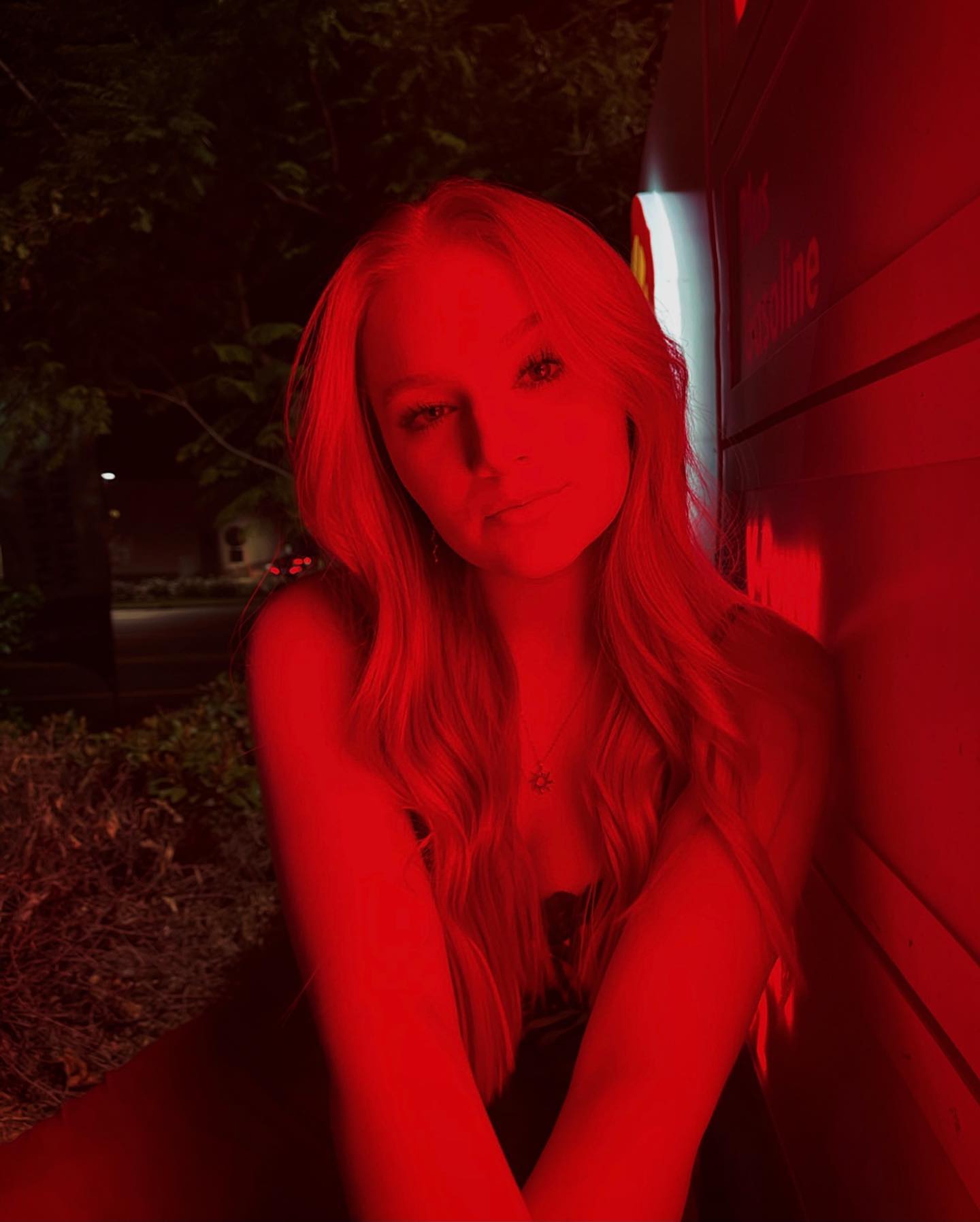 KYLIE TROUT CAN BE FOUND: