I was lucky enough to head out to Mexico last month for Luke Bryan’s Crash My Playa, which is now in its third year and takes place in the Riviera Maya.

5 days of sand, sunshine and country music. At first glance, it looked expensive for a four night intimate concert experience, but there is a payment plan option which splits the cost into 8 monthly payments over the course of the year, making it much more manageable. The package we picked included 5 nights stay at the Barceló Resort, where the concerts were held, as well as the 4 nights of concerts themselves on the beach, all inclusive food and drink within the resort and a shuttle to and from the airport.

The first thing that impressed me was the organisation and smooth running of the entire operation. When the payments were taken, there would be an email reminder a few days before and then an email confirmation the day the payment was taken. When we arrived in Mexico, the signs to the shuttle buses, and entire check in process were so easy and well laid out. We were greeted with a drink at check in, and given free Crash My Playa branded gifts – a cooler bag, an inflatable pool chair and a keychain bottle opener, and even the key card had Crash My Playa branding. 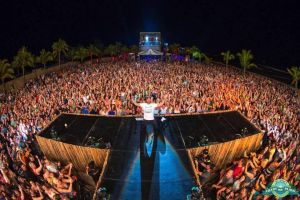 The concert gates opened at 6pm each night, so the daytime was filled with pool parties, off site adventures and chilling around the pool and on the beach. We threw beach balls around the pool while singing along with Old Dominion and floated around on giant inflatable unicorns and gummy bears while singing along to Brothers Osborne. There was a swim up pool bar which gave us a supply of pina coladas, strawberry daiquiris, and the occasional shot of tequila.

There were options to do off site adventures with Crash My Playa, which included day trips of zip lining, swimming in cenotes, sailing and climbing ancient ruins, but we opted not to sign up to any of these. Instead, we took a taxi to the closest local town of Tulum and spent a morning hiking around some of the stunning scenery. 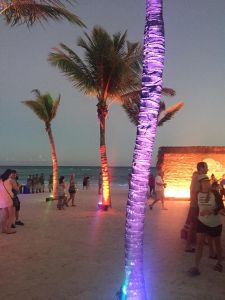 Luke Bryan headlines two of the four nights and this year, he had Little Big Town and Blake Shelton headline the other two nights. I’m not much of Blake Shelton fan (sorry!) but I learned that the line up is irrelevant because the entire event is just so much fun! Blake’s night finished with an epic encore featuring Gwen Stefani, and then an hour of karaoke with Luke Bryan and Little Big Town. It was a completely different atmosphere and vibe then other concerts I’ve attended, and was so great to see the artists chilling out and having fun too. Luke played two different sets, mixing up all his hits, songs from his latest album and some cover songs. Each night pushed the boundaries of the curfew, with the music going until midnight and the artists not looking like they wanted to ever leave. 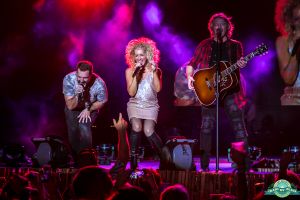 We were greeted each night at the festival with a line of waiters with trays of free drinks – all part of our all inclusive package. The waiters also continued to bring trays of drinks in and out of the concert crowd, so even at the front of the crowd, you didn’t have to go to the bar! There was a buffet of food which continued serving even after the concerts had ended each night, so we made sure to pick up some churros on the short walk home each night. There was a chilled out area near the back – complete with hammocks hanging by the ocean, as well as a huge sand sculpture and a collection of lit up palm trees with colourful crochet jackets. 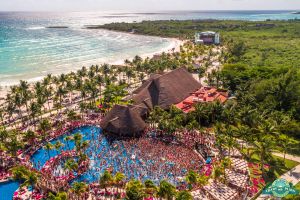 Despite the all inclusive drinks and party atmosphere, if you are thinking it might be too much like a Cancun spring break scenario, the pricing of the event meant the majority of the audience were older. Our room was situated in the block closest to the concert area and there were no issues with noise at night. We had 5 days in complete paradise, Luke Bryan definitely knows how to throw a party and I would completely recommend Crash My Playa! 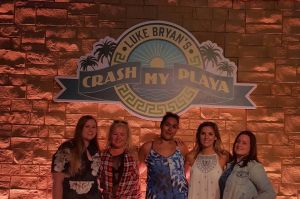