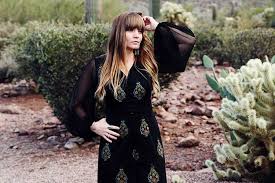 I am so happy that the UK is embracing this 26 year old singer/songwriter, originally from Arizona, with open arms. Her first album release over here ( Honest Life 2016, Loose Music ) received wonderful reviews and her live dates here earlier this year were equally well received. Lucky enough to see her London show last time round ( read my review here https://thinkcountrymusic.com/whats-new/courtney-marie-andrews-2/) I was excited to see that she was returning here for more dates this Autumn, to be followed by some European concerts ( details here https://www.courtneymarieandrews.com/tour) and Courtney Marie kindly agreed to answer a few questions for Think Country …….here she is talking about her troubadour lifestyle, musical influences and more!

Hi, Courtney, thanks for taking the time to answer my questions! I always like to ask artists where they are when they are writing their responses, so let’s set the scene and ask you that one! Thanks for asking the questions!  I am currently in Carlingford, Ireland. It’s a very old medieval Irish Sea town. I’m sleeping in a hotel above a pub. I feel like I’m in a postcard. Tomorrow night the band and I are off to play in Dublin. Obviously this is a country music website I’m writing for, your music and voice definitely resonates with country music fans but I understand you don’t want to be pigeon holed when it comes to musical genres. Is that because your creativity would be stifled and/or because your musical influences are so varied? I never intended to be a country artist. My favorite Bob Dylan album for a while was Nashville Skyline, and I thought it was so cool he made a country record in the height of the psychedelic era.  I always imagined myself making all types of records like the songwriters of the 60s did. If you listen to my record ‘No One’s Slate is Clean,’ you’ll hear it’s a prog rock record. I’m into exploring genres and different songs. I’ve just read a fantastic article you wrote about one of your biggest influences, Townes Van Zandt. In it you say that his songs are so real as he actually lived them, is that something thats important to you as a songwriter, being able to relate to your lyrics on a personal level?

I think there needs to be a certain level of world weariness and awareness to be able to convey certain emotions and ideas. I think it’s partly that, but a lot of craft has to be involved too. It’s a balance of craft and experience. Does that make it hard to co-write? All the tracks on your last album ( Honest Life, 2016)  were solo writes I notice…..or was that also down to logistics, you being on the road so much?
Co-writing is much easier when you’re writing it with a friend, in my personal opinion. I’m more of a ritualistic songwriter, than I am a 9-5 office songwriter, so co-writes have to feel special in order for me to want to use the song. It feels forced and fake, otherwise. Are there any contemporary singer/songwriters who inspire you or who you’d maybe like to collaborate with? Lucinda Williams and Josh Tillman are both incredible writers. It was “Honest Life” that first brought your music to my attention, it’s a wonderful collection of self-penned songs largely inspired by your feelings of being homesick while on the road I gather. Yet looking at your tour schedule you don’t seem to be spending much time these days in your (now) hometown of Seattle, WA! I assume your love of hitting the road and playing your songs overrides your desire to be at home? And traveling and new experiences gives you inspiration for new material? The homesickness was definitely derivative of me being heartbroken. I’m a road “dawg” always and forever until something very important beckons me home. Music is my career and chosen path, so I don’t foresee slowing down anytime soon, or ever. Experience is a huge inspiration for me, but I’ve been trying to draw songs out of the more mundane aspects of life, rather than writing only about the road. It’s a nice exercise in craft.  What is the music scene like in Seattle, and as a singer/songwriter what made you choose to move there rather than the more obvious cities of Nashville or Austin? When I first moved to Seattle it was a happenin’ music city. It’s changed a lot in a very short period of time. I don’t really live there anymore. I mostly rent Airbnb’s in LA or Nashville when I’m not touring, and I keep my stuff in storage. No use paying rent somewhere you’re never at. I caught your last London show back in March and am so happy you’re back in the UK next month playing some festivals and headline shows. Last time round you were accompanied solely by a pedal steel player (who I gather you’d only played with once before?)…..what are we to expect this time ?
This time you’ll get to hear the guys who played on Honest Life. This is my usual American touring band. It’s me, electric guitar, bass, keys, and drums. We’re all really into The Band and Little Feat. Roots, soul, and rock. I see you have added a second date in London as the first has sold out, Loose Music picked up on and released your last album over here , and you were also invited to appear on the prestigious “Jools Holland” television show in the Spring!  Are you surprised with the support you are receiving in the UK, and in Europe in general?
I’ve been so incredibly grateful for the support in the U.K. I feel very lucky, and feel like to work is finally paying off in a way. I look forward to many years of coming back. Jools Holland was a dream! I absolutely love that show.

You’ve released a new single recently, “Near You”. It was written six years ago I understand…..what a gem to have kept hidden for so long! Can you tell me a bit about it please, and why it’s only just seen the light of day?

I wrote that song when I was twenty, and for some reason it never fit with any of my records, but I always kept playing it. Since it never left my repertoire I decided to give it the proper treatment and record it for real. I’m glad I did. It deserved a place somewhere. And does this herald a new album from you anytime soon? I’ll be going into the studio after this tour!

Fantastic news! Many thanks for your time, see you next week at Bush Hall where I’m hoping to pick a copy of your 2013 album “On My Page” that has recently been made available on vinyl!