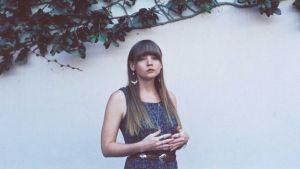 I have social media to thank for my recent introduction to the the music of 26 year old Courtney Marie Andrews shortly after the release of her latest album “ An Honest Life” , a collection of songs I loved from first listen and I jumped at the chance to see her live when this show was announced. Now living in Seattle, Washington she has been a session musician ( guitar and backing vocalist ) for numerous artists and has lived a troubadour lifestyle since the tender age of 16, her life experiences on the road contributing to her own writing.

I’ve been to The Social once before, not the best lay-out for live music I must say ( very long and thin, especially to the rear) and with it’s low ceilings and capacity crowd it wasn’t the most comfortable of venue plus the stage lighting left a lot to be desired although the sound was thankfully very good.

A bonus for me was to find that UK’s “ William the Conquerer” was opening for Courtney Marie ( well, the trio’s front man, Ruarri Joseph)…..I had caught them at last Summer’s “ Nashville Meets London” concert and although more indie/folk than country had enjoyed their music and bought their EP. With an album due out on Loose Music later this year, his confident and engaging 30 minute set was well received, lyrically all very strong compositions. I particularly liked the bluesy feel to a couple of the songs, which I could imagine being enhanced with the addition of harmonica.

The customary break between artists saw the venue fill up even more, a mixed crowd if ever there was one and I was already excited to see a pedal steel on the stage , my favourite instrument when it comes to country music, and one which features strongly on Courtney Marie’s album.

Seemingly dwarfed by her guitar, the slightly framed headliner and her dreadlocked ( yes, honestly!) steel accompanist Bryan Daste ( from Portland, Oregon) were greeted with cheers from the expectant audience, a quick tune-up and things got underway. From the start the wonderful playing from both artists was evident, and combined with Courtney’s vocals ( a little edgier and less mellow than on her recordings I thought ) it was clear this was going to be a great set.

As expected there was a strong representation from “ Honest Life” including the title track ( which got huge applause) “Not The End”, “ Table For One”, “ Irene”, “ Put The Fire Out”, and “ Let The Good One Go” , but interspersed were new and less familiar ( to me !) songs many of which were introduced by tales of how they came to be written. One that was particularly poignant was the story of Courtney’s Aunt Shirl, someone who “ gives more than she receives”, who had helped look after her as a child while her mom worked two jobs and who introduced her to musical theatre which sowed the seeds of her ambition to perform. Sadly Shirl was recently diagnosed with grade 4 lung cancer, and Courtney wrote a song dedicated to her which “ ponders on the meaning of life”……sorry I’m not sure of the title but it contained some amazing lyrics, lines such as “ there is no value in success…when we pass these things don’t last”.

There was further insight into her early years before she performed “ Woman of Many Colors”, about “ not forgetting where you come from “ from her album “ On My Page” ( a song which really showcased her excellent guitar playing ) when she told about her roots, growing up in Phoenix, Arizona “ in a valley full of things trying to kill you, including a cacti that my mom planted right near where the car was parked and which threw thorns at you if you got too close……I filled up my time there writing songs”

Always amusing, I loved how she admitted to being really bad at remembering people’s names, and had to resort to quirky methods to help her……working as a bartender in a small town before making her recent album, one of the customers got nicknamed “ dancing Debbie” as that is what she was always doing, and she ended up, to her sheer delight, featuring in the video to “ How Quickly Your Heart Mends”

She added that and when the sound engineer at tonight’s venue introduced himself as “ Tall Paul” she knew straight away they were going to get along!
“ Rookie Dreaming” ended the set, and taking a swig of red wine as she hovered at the side of the stage ( “ there’s no where to hide here! “she rightly said!) it wasn’t long of course before she was back for her encore songs, the first being a wonderful rendition of her single “ Put The Fire Out” ( Tall Paul to the rescue as the mic stand decided to collapse!)

before closing with another new one ……” I’m sure you in the UK appreciate how weather systems can affect your mood, well I’ve been living in a RV outside Seattle recently and this song is about how not to let things get to you”. Once again, apologies for not getting the title, but the lyrics included “ head into town, sit in the bar, look like you’re having fun and they’ll believe that you are”.
Well there was no doubt at this intimate gig ( as Courtney joked at one point “ I bet you guys didn’t think you were signing up for a sauna!” ) that everyone both on and off the stage definitely WAS having fun, and I really hope we’ll see more of Courtney over here soon……in fact, there are some dates in the pipeline later this year I’m happy to say and I’ll really look forwards to those for sure!

Keep an eye on out on this site and of course on https://www.courtneymarieandrews.com for more info!