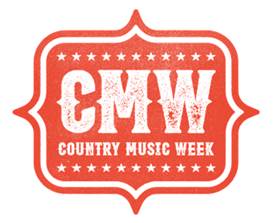 The organisers of the hugely successful Country to Country music festival, have announced the first names appearing in London during Country Music Week – a very exciting and brand new week-long series of shows taking place from Monday 2 to Sunday 8 October 2017 in London venues. We can confirm these concerts and more names will be announced soon: 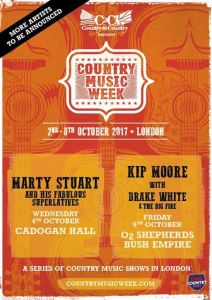 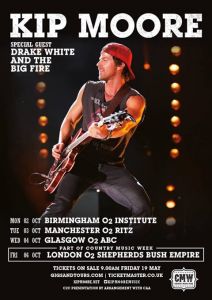 Tickets for Kip Moore with Drake White will be going on sale 9am Friday 19 May and tickets for Marty Stuart will be going on sale 10am on the same day. Via www.gigsandtours.com / www.ticketmaster.co.uk and www.axs.com/uk. These shows are part of UK tours with details below.
Country Music Week (CMW) will feature live shows and unique events across select venues in central London. The events will recognise and celebrate emerging artists within the broad spectrum of country music, will give fans another opportunity to discover UK and US acts early in their career and will connect fans with the stories behind the songs and will include additional programming and a central hub area.

KIP MOORE
Over the last few years, Kip Moore has spent most of his time on the road, building one of country music’s most loyal audiences. He’s a road warrior, armed with a live show that mixes the bombast and wild desperation of Bruce Springsteen with the rootsy stomp of Merle Haggard, living out of a tour bus with his bandmates and playing more than 200 shows per year. For a songwriter who’d grown up in a quiet pocket of southern Georgia, performing to crowds across the world — crowds that knew every word to his albums, Up All Night and Wild Ones— felt like a dream come true. Kip’s latest release is a 5-track EP, album is called Underground.

DRAKE WHITE and the Big Fire
The critically acclaimed Drake White (one of the “break-out” artists at C2C 2017) has been called, “One of the country’s most energizing performers”, by Rolling Stone Country. He’s a rapidly rising new star who released his acclaimed debut album, Spark on Dot Records, in the summer of 2016. The foot-stomping singer/songwriter and nature enthusiast co-wrote 10 of the tracks and the cover tells the visual story of who Drake White is as an artist, husband and native-Alabamian. The images imprinted into his silhouette paint a narrative of White’s life, including his wife Alex, his hometown church (where his grandfather served as preacher), his dog Writer and other mementos that inspired the record. White has been touring as opening act on Zac Brown Band’s Black Out The Sun tour in addition to his own headline dates.

MARTY STUART and the Fabulous Superlatives
Marty and his band won rave reviews for their C2C performances earlier this year and have just been nominated for Best Group in the 2017 Americana Awards. For over forty years Stuart, a five-time Grammy winning multi-instrumentalist, singer, songwriter, photographer and historian, has been building a rich legacy in country music. On his latest release, the double-disc Saturday Night & Sunday Morning, Stuart captures all the authentic neon and stained-glass hues of country music – from love and sex to heartache and hardship to family and God – in twenty-three tracks.

The official radio partner of Country Music Week 2017 is Chris Country Radio.
Programming and other supporting partners will be announced soon.

What Country Music Means To Me