What I am looking forward to… Simon Aston 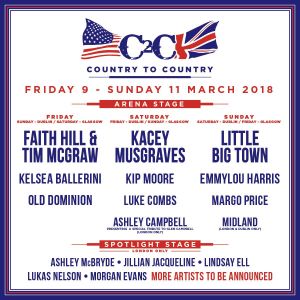 Well, it’s nearly that time again, the annual pilgrimage to the Country2Country festival. Last year it was to London, with all the associated goings on in & around the O2, & what a show it was – Brad Paisley headlining, with my personal highlight being meeting & talking to the legendary multiple CMA award winning Mac McAnally after his show at the Town Square. It was a really good afternoon /evening & left me looking forward to the 2018 event.

Now I have to admit, I’m not a huge fan of this new “pop country” which is all the rage at the moment, so I was initially quite underwhelmed when the announcement was made for the lineup at 2018 C2C – I mean, is Kacey Musgraves really a headliner, haven’t Little Big Town only just played the UK a few months ago, as have a few others on the bill? It all looked a little lack lustre to me, but I kept my fingers crossed that the three artists I really wanted to see would end up on the same night.

I wasn’t bothered about any of the headliners (seen Kacey Musgraves & LBT, & Tim & Faith, whilst being a big draw for some, are a little bit too soppy lately for me), so wasn’t I in luck to see the three I wanted all come up on the same night!

Yep, how could you go wrong with Midland, Margo Price & Emmylou Harris? I can’t wait to see Midland, the big hope for country rock (I worry about Big Machine’s involvement though), Margo Price, great old-fashioned country lyrics, & the ever wonderful Emmylou, who has epitomised the clear voiced female country singer from the classic country years. I really hope she goes back to some of those early albums such as “Luxury Liner”, “Elite Hotel” & “Quarter Moon in a Ten Cent Town” & digs deep into old Hot Band territory. That’ll show the younger fans what they’re missing when they listen to the stuff that comes out of radio these days.

LBT are headlining this night, so I hope that Karen Fairchild enjoys it a bit more than she seemed to do when they played in Newcastle last year – she rarely smiled at all.

So it’s to Glasgow this year – somewhere different to go, in the hope of hearing some proper country music – let’s keep our fingers crossed!