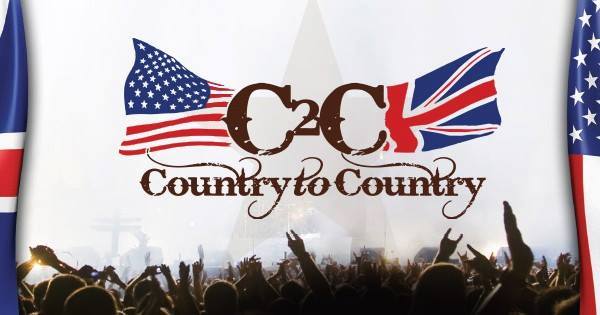 Of the 3 days of Country 2 Country, Saturday was the day I was most looking forward this year.  At last I was going to see a band that had been on my bucket list for years, but came off it when the 2 main parties decided to follow solo paths.  I am of course talking about Sugarland.  When Sugarland were announced after most of the other acts had been confirmed I honestly felt the earth tilt!

I had seen Sugarland in Nashville in 2010, as part of the CMA Award show & had wanted to see them in their own show ever since.  Obviously Kristian Bush opened the very 1st C2C in 2013, but I was so excited (& frankly overwhelmed) by the fact that I was sitting in the O2 in London & was about to have 2 full days of live Country music surround me, Kristian kinda washed over me & afterwards I could remember very little of his set.  Same for Vince Gill I am afraid.  Little Big Town were on stage before I stopped pinching myself & started to pay attention!  Last year Jennifer Nettles opened for C2C & although I missed the very beginning of her set (I went to the wrong entrance & had to run back to the other 1!!) I only missed a couple of songs & Jennifer was 1 of the best starts to the festival ever (in my opinion!!)

So no wonder Saturday morning found me dancing round the hotel room shouting “Sugarland Day, Sugarland Day!!”  There was a time to go before that though!

This year I had brought a friend with me who I have known for a couple of years.  She was a closet Country music listener when we 1st met, but after just a little encouragement from yours truly, she became a full on fan.  When she split with her boyfriend end of last year, she said to me, “That is it, I am coming to C2C with you in March!”  The fact that I already had my ticket, so she wouldn’t be sat with me didn’t faze her at all.  It actually turned out another friend also wanted to go, but had been hesitating about buying tickets.  When (yet) another friend advertised he had 2 ticket to sell, I nearly bit his arm off!  He had really good seats on the side, so as both girls are vertically challenged, it suited them right down to the ground.

All weekend Bianca was like a kid in a toy shop the week before Christmas, it was really entertaining watching her enthusiasm (not to mention the relief, it is a lot of money to spend & then the person turn round & say, do you know, I didn’t really enjoy that!)

We arrived at the O2 & Bianca wanted to go into the Town Square area.  There was quite a queue, so begrudgingly I started to queue.  Talking to the people behind us, I found out that the Wandering Hearts were the next band up to play.  I said to Bianca, really sorry, I have seen them before & although they are really good, I would rather go see someone I haven’t seen.

Which is how we found ourselves in the Indigo watching Ashley McBryde.  We missed the beginning of her set, but got there in time for Fat & Famous. I have to say, the Indigo was HEAVING.  We had gone upstairs & around the back, it was 2-3 people deep.  I couldn’t see the stage at all & could only just see a screen.  I did ask a couple of people if they could part for me, so I could actually see Ashley on the stage so I could say I saw her live!  Ashley’s set was humourous, lively & fun.  Here was a woman who owned that stage.  She told anecdotes in between her songs and the crowd just lapped her up.  Saturday had started with a BANG! 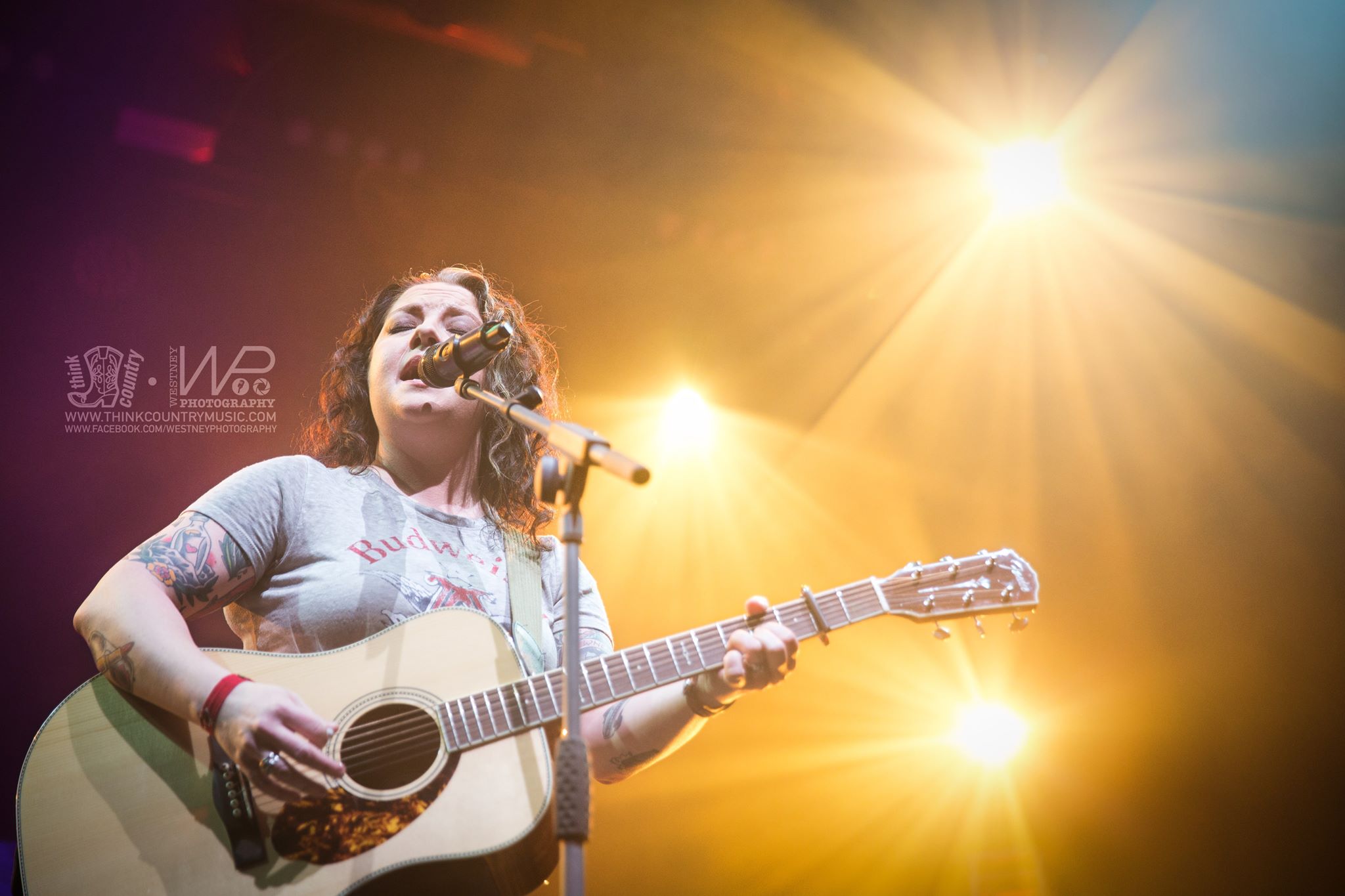 I then wanted to see the act who had been on in the Indigo before Ashley, Delta Rae.  A friend had told me he was pretty much going to follow Delta Rae around the whole weekend.  So I wanted to try & catch them just once.  They were on in Ny-LON.  So off we toddled.  When we got there there was a queue, but not too bad & it did move quickly.  However we got in, only to find another, much longer queue.  I wasn’t happy!  However I seized the opportunity to nip to the loo.  Went in the 1st door & it was really heavy, so 2nd door, I pushed with a lot of force, the poor woman standing behind the door was nearly launched into the middle of the following week!!  Oops!!  Came back out & the queue had completely disappeared!!

I hadn’t been in the NY-LON before.  Talk about cosy!  Again it was packed, we managed to find some friends though who had bagged a sofa at the back, so we squeezed in with them.

Delta Rae are normally a 6 piece band from North Carolina, for this performance though it was just the original 4 members – Holljes siblings (Eric, Ian & Brittany) with their best friend Liz Hopkins.  I think it was Eric who did most of the talking, but the 2 brothers look very similar!  They sang 4 songs, including There is No Peace in Quiet, a break up song written by Eric, which is so personal, he still can’t sing it, he asks Liz to sing it.  Eric did introduce Liz as the sister they never had!!  Brittany was not much amused!!  Eric also commented on the venue, he said it was like playing in someone’s living room!  The harmonies of these guys really is something else, they sent shivers down my spine, however it was the song All Good People that really got me, it brought me to tears!  It is a protest song written by Eric & Ian after 9 people were shot & killed in a church in South Carolina, it is really powerful.  This was my moment of C2C this year!  After this song they started to leave the stage, but the crowd were having none of it, so after a very quick exchange of words they sang 1 more song.  This really was an amazing performance, I was really glad my friend had brought the band to my attention.

We left NY-LON after Delta Rae as I wanted to see the act on at the Big Entrance.  The act I wanted to see, I have seen before & was completely blown away by.  I knew of the guy due to his Facebook interactions with people rather than because of his music.  I was determined to not like him when he performed at FSA Fest last year.  Instead 1st song started to change my mind, 2nd song I looked at my friend & said “Man, he is good!”  3rd song I was clapping, 4th song on my feet dancing!  For someone to change my mind that completely is unheard of.  I am of course talking about Lars Pluto.  He is an American, currently living in Devon.  He has an extremely low opinion of ‘Bro Country’, ‘Pop Country’ and pretty much most modern country and he is not shy about who he tells or how bluntly he says it.  I was interested to see what he would say about C2C as he has previously spoken out about what a rough deal it is for the UK Pop Acts if they can even get onto 1 of the stages.

Lars’ set was about half an hour long, he sang a mix of his own songs and covers, it was the song he ended on though.  It was a song he has written & it was the protest I was expecting.  Lars explained he had written it about his 1st love – Country music.  The 1st line was “Dear Country music, what the f**k happened to you?”  It was basically a song about how Country music has sold its soul for a cheap buck.  He even gets a dig in at the BCMA’s (everyone who knows the name Lars Pluto knows he HATES the BCMA’s with a passion!)  It was a funny amusing song, but you couldn’t help but agree with the sentiment.

I then decided I had made Bianca wait too long & we went to Town Square.  The queue wasn’t quite as long as when we had got there this morning, but it was still long & even had a Disneyesque queueing system where you were going up 1 way & back down another.  While we were in the queue a very funny thing happened.  Peoples phones started beeping, the whole queue almost as 1 got their phones out of their pockets.  It was a C2C announcement, Ward Thomas were the special in the Town Square.  I looked at Bianca & said “Good job we are already in the queue!!”  It didn’t actually take us too long to get in, but flipping heck it was busy.  There were lots of stalls, but it was tricky to manoeuvre between them, or even look at anything.  Ward Thomas came on, but the stage area was tiny and was also a pathway out, so it was really difficult to find somewhere to stand & actually watch the act, so we went through to the back & had a drink & something to eat & just listened to the girls.  I will say here, this was my 1st beer of the day!!  Go me!!  Normally I would have had a beer at every venue!!  Lol!!