Prior to the CMA Songwriters Series show to kickoff Country 2 Country 2019 in London last Thursday Amy & Jamie had an absolute blast hanging out with Travis Denning.  This guy won so many new fans during the whole weekend and I am sure this will not be the last time we see him over this side of the pond! 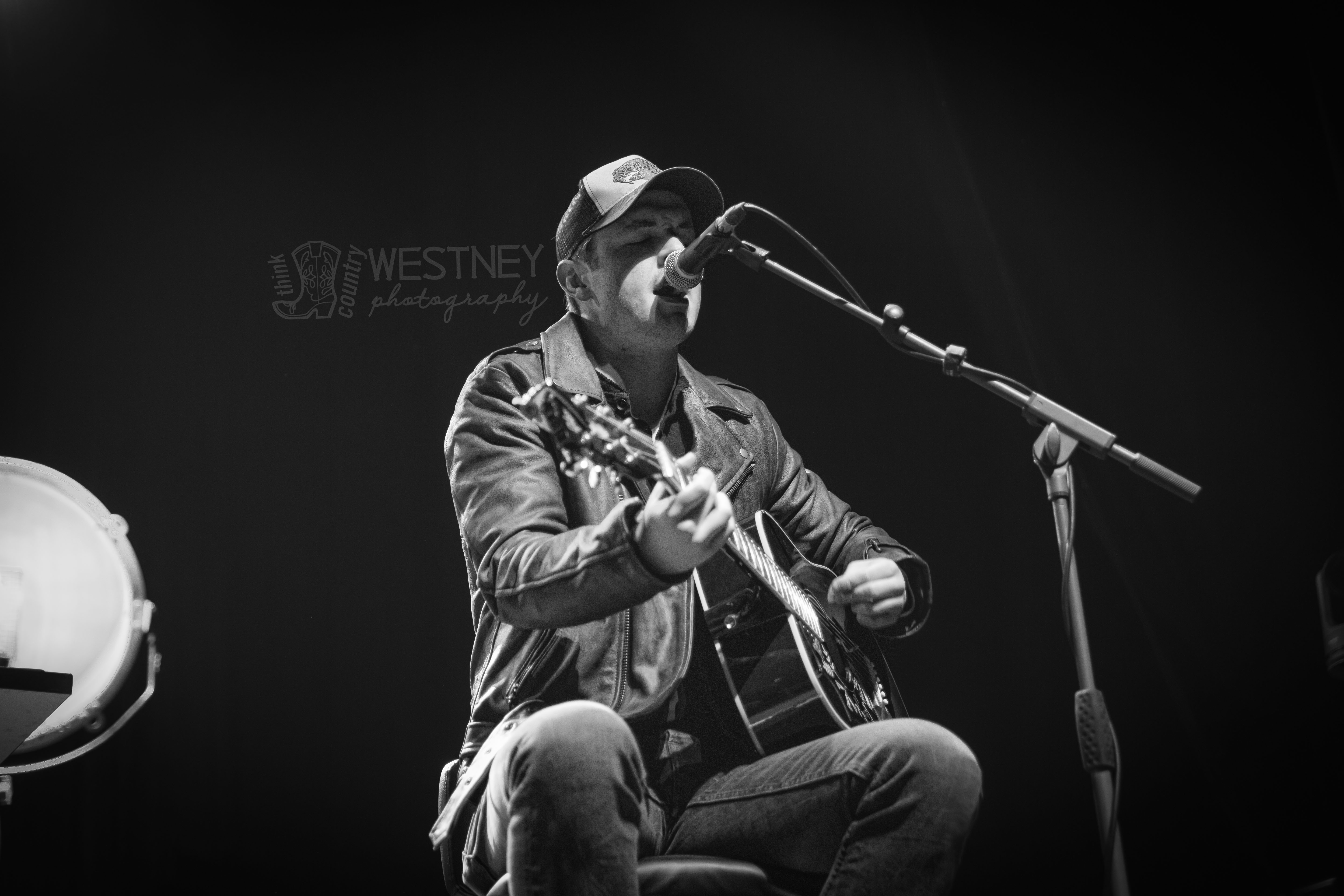 Amy – So is this your first trip over to London?

This is actually my second, but really the first time playing for folks and being here for more than like 2 and a half days and strictly business kind of thing so this is very exciting!

Amy – So I believe this is the first time we at Think Country have spoken to you so can you give us a little bit about yourself?

Sure, I was born and raised in middle Georgia and grew up listening to the Allman Brothers Band, ACDC, George Strait and Alan Jackson.  This whole eclectic spread of music.  I always tell people I was one of the first generations of downloading music as far as iTunes, Limewire and all that but I grew up listening to a ton of music.  I fell in love with it and started playing guitar when I was 11 then started writing songs when I was about 17.  I moved to Nashville when I was 21 then a couple of years later, here I am!

Jamie – The one song of yours that many people will have come across is David Ashley Parker From Powder Springs.  For me I love the start to the video saying “based on a million true stories” and how it’s so true.  The fact we can drink a few years earlier plus it’s not quite as strict with checking everyone like we saw in Nashville

Yeah I know, especially in Tennessee and like Nashville that’s like a law they wrote in that they wrote in and if it’s expired you can’t drink either.  That’s the thing I thought about though, how am I gonna this song in the UK and will anybody get it?

Jamie – Oh they definitely will!  I have a friend who back in the day had “someone’s” expired passport for like 2 years after they got a new one and were coming out with us when they still 16!

Ultimately that’s just a testament to the story of a billion.  It’s the story of life, fun and youthful rebellion.  You know if they move the drinking age down to 18, we gonna be drinking at 16 too, it is what it is!

Jamie – It’s just such an interesting song just telling that relatable story going through it all.  When you were writing it, was it an idea that straight away you knew you had to make it into a song or did it just come to life one day?

Well firstly it’s 100% true, it was the name on my ID and all that!  So I first had the idea when I was like 19 or 20, it wasn’t ever an “I’m gonna write this right now” but thinking one day it would be cool to write a song about this but have the name of the song be so weird in the name so people are like what the hell is this?  Finally when I was like 24 or 25 I guess I was in the writing room with Jon Randall and Jessi Alexander then I just remembered that thought and was like OK I’ve lived a little so I can look back on this and write it!  It was very specific, I was like I want this to be so specific to me because that was the only way it was gonna be specific to everyone else!  You know it’s gonna be everyone’s story but but the details had to be my ID!  I remember when we wrote it, thinking this is gonna be like the biggest song I have ever written then from that day there was a part of me that always wanted it to be my first single.  When we went out on radio tour everyone just immediately grabbed on to it because I think it was different and I think it was something people kinda wanted!

Jamie – I am sure you may have heard from people back in the States how much the crowd over here will listen to artists.  You mentioned Jon & Jessi who have both played this show before and what makes it special is how people don’t just wanna hear the songs as they want to take it all in 100% then know why you wrote it and what it means to you!

It’s super special, when I was here 2 years ago it was during C2C and I actually got to come to this exact show.  It was like Maren Morris, Liz Rose and was an incredible show!  I was just kicking back and having fun but that was so eye opening too!  I felt like an obnoxious damn southern Georgia boy, because I was like “Woooooooooooooooo Drake White” and people were like “Yo Dude, Stop!”  Then I’m like Sorry, this is what we do over there but I realised right there that I can’t wait to play for this kinda crowd and now here I am!

Jamie – That is what’s great over here, there are times when people want to listen but we both saw Keith Urban last night and when people are there to rock out, the crowd will give it back exactly the same so you get to see both sides of us!

You know, I grew up loving all kinds of music.  I’m a huge metal-head like I love Motorhead, Slayer, Lamb of God and all these big metal bands so Download festival is like the greatest festival for that in the world and it’s because it’s the most insane crowd!  I love that it’s from the same place where they can just come and really soak in the music.  I think it’s just a testament to how passionate the fans are!

Jamie – What I remember is you go from these bands doing really heavy stuff on 1 stage and we ended up in another tent and saw Halestorm playing acoustic which was so far from Lzzy the rock goddess to just stripping everything back!

The lineup is always like I couldn’t have dreamed of this better!  I’ve known a couple of buddies who have played or been to it and were like dude it’s so awesome!

Jamie – Lastly I know you are a big football fan, I mean your type of football rather than SOCCER and we both are too!  Amy unfortunately is a Titans fan

Amy – Look, don’t judge me right, I have to deal with that myself!

I will tell you girl, that the Titans are my AFC team!  But I’m a big Falcons fan and big on University of Georgia which is truly my blood and soul of passion!  I’ve been very fortunate to be pretty good buddies with Coach Vrabel, the new head coach at the Titans.  He loves country music, he’s a great guy, his whole family are awesome and I think he is doing some good stuff over there!  It helps he has like 3 Superbowl rings as he played for the Patriots so it’s helping a lot over there!

Jamie – What I was trying to say is are Atlanta a going to be back up in the mix next year and finally eliminate Drew Brees and the Saints from the equation for the rest of us next season?

It’s been very difficult, at least we are starting from square one with the coaches but I dunno man.  2016 was our year and we blew it!  I remember watching the Superbowl and still dunno?  Georgia lost to Alabama in the Championship and those were the 2 best teams in the country.  They did a great play, they beat us but I got over that real fast but I don’t think I have gotten over the Superbowl because the Falcons LOST that game!  It was a bummer but the Saints, screw them.  It’s always good to beat them but we have Julio, we’ve got Matty Ice and Calvin Ridley is doing great.  They just need another good year!

Amy – Thank you so much for your time, enjoy tonight and the rest of the festival!

Thank y’all, I appreciate it guys and I’m sure I will!