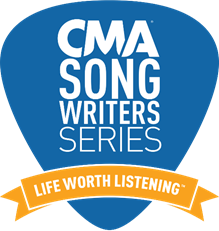 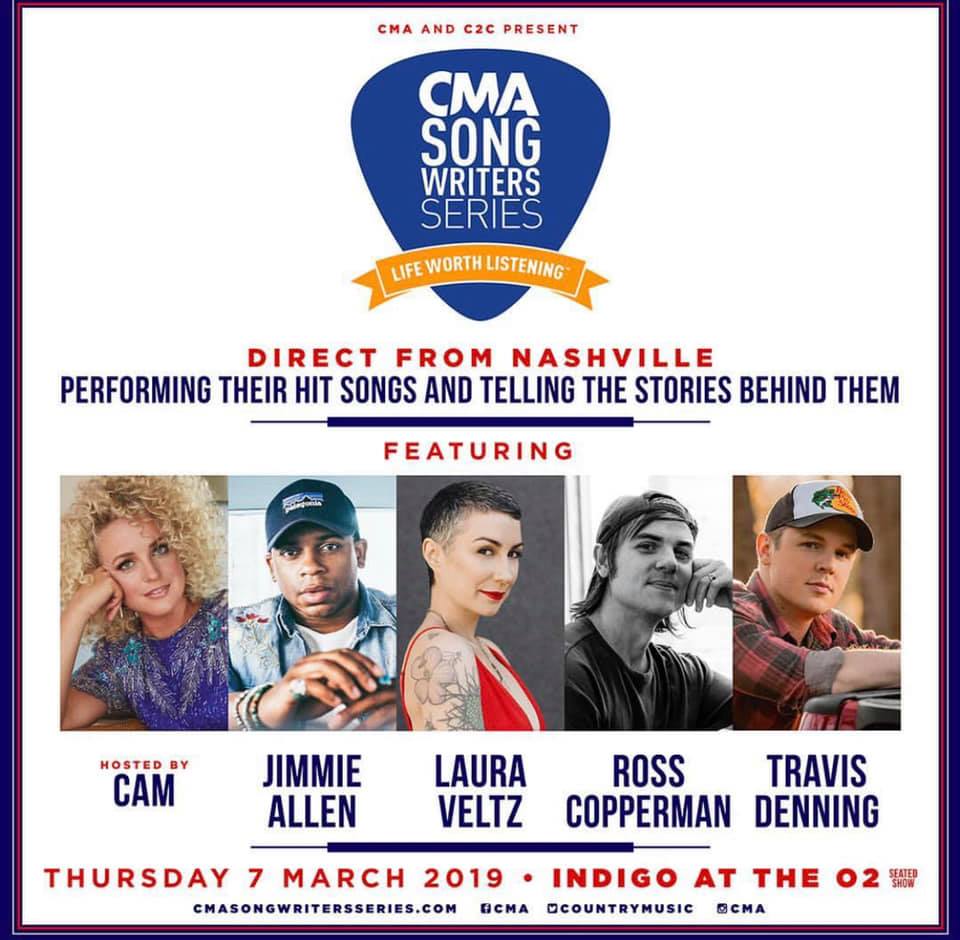 The Country Music Association’s critically acclaimed CMA Songwriters Series will return to London’s Indigo at The O2 March 7, 2019 to kick off C2C: Country to Country festival featuring Jimmie Allen, Cam and Ross Copperman, while introducing Travis Denning and Laura Veltz to U.K. audiences for the first time. The performance follows October’s successful second annual CMA Songwriters Series tours in Europe and the U.K., while also marking the sixth London appearance and third consecutive sold-out CMA Songwriters Series during C2C. Tickets for the performance are on sale Friday, Dec. 7 at 9:00 AM/GMT at AXS.com and gigsandtours.com.

CMA Songwriters Series introduces new artists and songwriters through its intimate storytelling format. Audiences get to know the performers, their journey and the stories behind their songs throughout the two-hour seated show, as artists take turns performing their songs acoustically. Each CMA Songwriters Series is unique—the one-off performances are unrehearsed, uplifting and heartwarming, leaving audiences feeling closer to the artists and the music.

“The CMA Songwriters Series has developed a reputation for delivering some wonderful magic moments on the eve of C2C each year,” said Milly Olykan, CMA Vice President, International Relations and Development. “We anticipate our next performance will be no different and we’re thrilled to reveal the 2019 lineup. Presenting hit songwriters and introducing new acts to U.K. audiences is so gratifying, with fans in the U.K. being so attentive and open to discovering new Country artists.”

Jimmie Allen
The epitome of the phrase “persistence pays off,” Jimmie Allen laid it all on the line to make his dreams a reality. Now signed to BBR Music Group’s Stoney Creek Records, Allen’s debut single “Best Shot” is a certified hit, claiming the spot as the No. 1 most Shazamed song in the format for eight consecutive weeks, and also claimed the No. 1 spot on Country radio, marking the first time a black artist has launched a career with a No. 1 hit with their debut single on Country radio. In October, Allen released his hotly-anticipated debut album, Mercury Lane, named in tribute to the street he grew up on and the origin of his incredible journey. Featuring a cutting-edge mix of Country, rock, R&B, and pop, Mercury Lane draws upon the influence his family and small-town upbringing of the critically-acclaimed rising star. The Southern Delaware native’s talent for songwriting is undeniable, having written a song that was featured in a Super Bowl commercial and appearing in a Diet Coke ad with megastar Taylor Swift. “Blue Jean Baby,” off his debut self-titled EP, immediately caught the attention of Country Music fans and critics alike with its soulful groove—rocketing it to the top of digital playlists, across all genres. After introducing his music at festivals across the country this summer, this fall Allen will hit the road once again to share the stage with Kane Brown, Scotty McCreery, and Chase Rice. The hot newcomer has already been heralded as one of the top “Artists to Watch in 2018” by Rolling Stone, Billboard, Pandora, Sounds Like Nashville, NY Country Swag, Country Music Rocks and New England Country Music, in addition to earning spots in CMT’s “18 for 2018” Listen Up program and Bobby Bones’ Class of 2018. Read more at JimmieAllenMusic.com.

Cam
Cam writes music to tell the truth, especially truths that help women understand themselves. The proof of Cam’s eccentric candor is supported in the brazen, bold song, “Diane,” the first release off her forthcoming sophomore release. Never one to shy away from hard conversations and topics, the CMA Awards-nominated artist brings to focus the realities of cheating in the driving, tempo-rich song, offering a redemptive opportunity that unites women rather than pit them against each other. And “Diane” made quite an impact, holding a multi-week residency on Spotify’s Viral 50 USA chart, breaking into the Top 15 on the iTunes U.S. Country chart and peaking at No. 1 on the iTunes U.K. Country chart. In addition to performing the song on multiple American television shows, “Diane” was expedited on BBC Radio 2’s A-List in the U.K. and has topped multiple best-of lists including Best Songs (all-genre) of 2017 by NPR, No. 3 on the 25 Best Country Songs of 2017 by Rolling Stone Country and No. 2 on the Top 10 Country Songs of 2018 by Taste Of Country. The momentum continues to build since the release of Cam’s 2015 breakout debut album Untamed, which landed at No. 2 on Billboard’s Top Country Albums chart with the year’s best first-week album sales by a debut Country artist. Untamed features Cam’s first No. 1 Country single, “Burning House,” which garnered multiple CMA, Grammy, ACM, CMT and American Music Awards nominations and remains the highest-selling single by a female Country artist since 2015. Along with working on new music, Cam co-wrote the song, “Palace” off Sam Smith’s latest album, The Thrill of It All. The song has Cam contributing background vocals and electric guitar to the track and was featured in the 2017 Holiday commercial for Apple. This spring, Cam joined Smith on stage for “Palace” during all four nights of his sold-out shows at London’s O2 Arena and went on to open for the international superstar on the North American summer leg of his The Thrill of It All Tour. Smith is among the impressive list of artists that Cam has shared the stage with in the last couple years. Others include a personal invite from Harry Styles at Nashville’s famed Ryman Auditorium, Tim McGraw and Faith Hill on their blockbuster Soul2Soul Tour, George Strait during his 2017 residency at the T-Mobile Arena in Las Vegas, Eric Church, Alicia Keys, Smokey Robinson and others. Read more at CamCountry.com.

Ross Copperman
Ross Copperman was born in Roanoke, Virginia with a passion to create songs. Following his dream, Copperman signed a record deal with Sony Records in the U.K. Despite the success of his debut single, he moved to Nashville to focus on songwriting and production. Copperman has written upwards of 16 No. 1 singles—from Dierks Bentley’s “I Hold On,” “Drunk On A Plane,” and “Black” to Brett Eldredge’s “Beat of the Music” and “Wanna Be That Song”—revolutionizing the sound of Nashville’s Country Music. He has produced and written songs for a wide range of Country artists including Jason Aldean, Luke Bryan, Kenny Chesney, Billy Currington, Eli Young Band, Florida Georgia Line, Little Big Town, Justin Moore, Kip Moore, Jake Owen, Chase Rice, Darius Rucker, Blake Shelton, Thompson Square, and Keith Urban. Copperman is a six-time CMA Awards nominee, having received two nominations this year in the Album of the Year category for his work on both Bentley’s The Mountain and Urban’s Graffiti U. He’s a two-time BMI Songwriter of the Year (2016 and 2017) and winner of five CMA Triple Play Awards, CMA’s honor for songwriters who have penned three No. 1 songs in a 12-month period. Copperman continues to ascend Billboard Country charts by the week, co-writing Bentley’s “Woman, Amen,” Kenny Chesney’s “Get Along,” Justin Moore’s “Kinda Don’t Care” and Chase Rice’s “Three Chords & the Truth.” He currently writes for Sony/ATV Music Publishing.

Travis Denning
A native of Warner Robins, Georgia, Mercury Nashville’s Travis Denning vividly remembers the moment he realized he wanted to pursue music for a living. He was seven years old sitting in his Dad’s truck and heard AC/DC for the first time. From then on, he was hooked and devoured all types of music from Country, pop, rock and heavy metal. Denning started playing local bars at the age of 16 and built a solid following from his distinctive songs and raucous guitar licks. He moved to Nashville in 2014 and within a year signed a publishing deal with Jeremy Stover’s RED Creative Group. After securing outside cuts by Jason Aldean, Justin Moore, Michael Ray and Chase Rice he caught the attention of Universal Music Group where he eventually signed a record deal in 2017. Denning just released his debut single “David Ashley Parker From Powder Springs,” an upbeat coming-of-age song that paints a picture of a young man reminiscing on his carefree college memories. The singer/songwriter has previously opened shows for Alan Jackson, Moore, Rice and Cole Swindell and is currently on the road with LANCO on the Hallelujah Nights Tour. When he is not touring, he is in the studio working on his debut album. Denning was recently named one of three recipients of the first-ever CMA KixStart Artist Scholarship, which provides educational and professional support to rising artists throughout the course of a year. Read more at TravisDenning.com.

Laura Veltz
Originally from New York City, Laura Veltz has spent her entire adult life writing and performing music. After a decade touring and recording with her family band, Cecilia, culminating in a record deal with Atlantic Records, she zeroed in on her love of commercial songwriting in 2008 and was lured to Music City by Nashville Songwriter’s Hall of Fame inductees Kye Fleming and Mark D. Sanders. Since then, Veltz has garnered cuts and hits by Country’s newest and hottest superstars alike, becoming one of today’s most respected songsmiths. Her list of hits and placements continues to grow daily including the chart toppers “I Could Use A Love Song” by Maren Morris, “Drunk Last Night” by Eli Young Band, “Lonely Eyes” by Chris Young, “There’s A Girl” by Trent Harmon, and the 2018 smashes “Speechless” co-written and performed by Dan + Shay, and “Rich,” one of Veltz’s four co-written songs from Morris’ Grammy-nominated album, Hero. Veltz has also co-written songs from the latest albums by Dierks Bentley (“One Way”), Kane Brown (“Live Forever”), Brothers Osborne (“Weed, Whiskey and Willie”), Dan & Shay (“Keeping Score” featuring Kelly Clarkson), Ryan Hurd (“To A T,” “Diamonds & Twine,” “We Do Us”), and Little Big Town (“We Went To The Beach”). Her songs have also been recorded by such artists as Devin Dawson, Maddie & Tae, Carly Pearce, Cassadee Pope, The Cadillac Three, and the Queen of Country Music herself, Reba.

Jimmie Allen will perform at the CMA Songwriters Series at The Indigo at The O2 in London March 7, 2019 during C2C: Country to Country festival.
Photo credit: Lee Steffen

Cam will perform at the CMA Songwriters Series at The Indigo at The O2 in London March 7, 2019 during C2C: Country to Country festival.
Photo credit: Dennis Leupold

Ross Copperman will perform at the CMA Songwriters Series at The Indigo at The O2 in London March 7, 2019 during C2C: Country to Country festival.
Photo credit: Taylor Kelly

Travis Denning will make his U.K. debut at the CMA Songwriters Series at The Indigo at The O2 in London March 7, 2019 during C2C: Country to Country festival.
Photo credit: Eric Brown

Laura Veltz will make her U.K. debut at the CMA Songwriters Series at The Indigo at The O2 in London March 7, 2019 during C2C: Country to Country festival.
Photo credit: Darling Juliet

Kenny Chesney Taps Caroline Jones for Songs for the Saints