Kicking off C2C weekend in the Indigo at the O2 is the host – the very funny, animated and 5-time CMA award winner – Kristian Bush. This night is always the sublime, standout gig for me. Listening to the music I love, stripped bare acoustically and without a hint of any production, it’s a real testament to the talent and strength of the artist and songwriter. There has been incredible talent on this night for the last couple of years, so this is no mean feat to follow. Kristian stood for most of the gig, tapping his guitar in time with the artists and songwriters and joined in to accompany them on occasion, his enjoyment written all over his face. 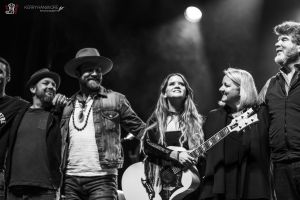 Introducing the CMA Songwriters series to the very few people in the audience who had yet to experience the magic of the songwriters concept, he quipped that the musicians themselves were like heroic gymnasts if they pulled it off and’ it is Jazz if they don’t!’ Fingers crossed then, here we go…

Kristian introduces us to Mr Drake White from Alabama (our stand out C2C performer and upcoming superstar), recent Grammy winner Miss Maren Morris, and her accompanying guitarist Bennett Lewis, the ‘most amazing writer ever’ and former recipient of CMA Song of the Year, Miss Liz Rose and ‘the guy at the end’ – the most amazing person to ever write songs’ – Mr Mac McAnally (former CMA Musician of the Year). Kristian kicks off with a song that started ‘at the end of a sofa’ – ‘Stuck Like Glue’ – a 2010 hit for Sugarland and a song that many had hoped Jennifer Nettles might make a surprise appearance for, as Miranda Lambert had done last year with best friend Ashley Monroe. Alas, not tonight Josephine as a weary Napoleon Bonaparte would say, it was not to be. However, this is all the fun of Songwriters and C2C in general; we all like to guess who might make a surprise entrance.

It was actually The Shires, our very own home-grown duo, who appeared halfway through the night to receive a CMA Award (much to their surprise), presented to them by Kristian for Global Country Artist. This essentially is in recognition of all they have done to promote country music in a foreign field. Love them or hate them and I personally respect them immensely, The Shires completely deserve this award for their achievements. Congratulations from all at Think Country! 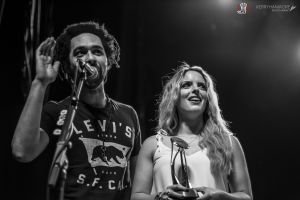 This was Drake White’s first visit to Europe and I’m sure will be the first of many more. I defy anyone, male or female, not to have fallen in love with his huge voice, Southern charm, edgy songs with a mix of rock and soul and intelligent lyrics. He is entertaining to watch, his whole body swaying and feet going in time to the music, so much so that Maren Morris actually steadied a hand on the back of his chair so it didn’t fall over. Such passion and energy with a guitar, and plenty of stories to tell. Spark is one of my favourite albums of 2016 and the live delivery of some of the stand out songs (Back to Free, I Need Real, Story, Makin’ Me Look Good Again, Heartbeat) didn’t disappoint. Oh and he can whistle pretty well too! 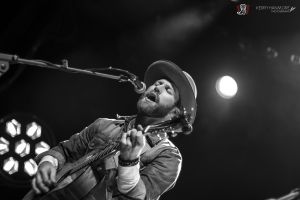 A self-confessed Harry Potter fan, who likes to say shit quite a lot I and loves Karl Pilkington, Maren Morris, accompanied by her guitarist, showed us why she deserved a Grammy (Best Country Solo Performance for ‘My Church’). Despite having a touch of jet lag, her soulful, country tinged with a touch of pop vocals, effortlessly rolled off her tongue and reverberated around the Indigo. She has a big voice for a little lady; her guitar even looked bigger than her! Positively a powerhouse with a lot of promise and I can’t wait to see what she does next. I don’t believe I’m ever going to get bored being taken to church either. (Rich, Bummin’ Cigarettes, 80’s Mercedes, I Could Use a Love Song, My Church). 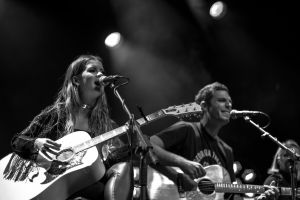 Liz Rose seemed blown away to be here and in her words ‘was out of her league’. I think not. Vocally, Liz hasn’t got the strongest voice but assistance from the crowd (at her request) and her impressive back catalogue of songs (around 20 of them co-written for Taylor Swift) is incredible. Mac McAnally accompanied her on guitar as she sang her way through a few of her biggest hits starting off with ‘White Horse’, beautifully understated and perfectly delivered. Middle aged men and women were transported back into their teenage years and I spied a few pairs of feet tapping up and down when they thought nobody was watching. Special mention goes to Girl Crush which once again, all down to a mass singalong, causes a writer to break down in tears. It seems we are very good at doing that! (Grocery Money, You Belong to Me, Ex-Boyfriends, Girl Crush) 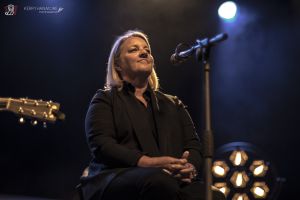 Mac McAnally is a wonderful, captivating storyteller and all-round good guy. He looks like the guy that lives next door and likes to wash his car every Sunday and mow the lawn, before sitting down to a roast and a nap in front of the TV with a can of John Smiths. Apart from he was born in Alabama, has been CMA Musician of the Year 8 times, written and recorded with Kenny Chesney and is a member of Jimmy Buffett’s backing band, The Coral Reefer Band. Such talent and an extremely colourful personality, who was a joy to listen to. When Kristian sings the brilliant ‘Trailer Hitch’, Mac just starts jamming along with him much to the audience’s delight. As the songwriters said ‘they are all following Mac’. (Down the Road, All These Years, On Account of You, Back Where I Come From, Little Martha). 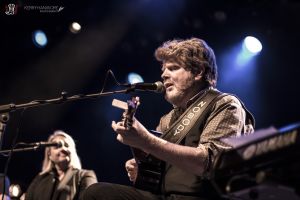 Kristian Bush’s Flip Flop song is definitely worth a mention and provides a lot of laughter for his light-hearted lyrics and easy going, laid back tune. I thoroughly recommend you downloading and adding this one to your catalogue of must hear ‘fun’ country songs. 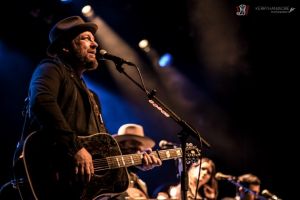 The promise of a few spell binding hours of Songwriters Series seems to fly by in a range of emotions, singalongs, laughter and tears. This night for me is the best start to C2C that you could ever wish for, and once again the songwriters deliver and prove why they should receive the worldwide recognition they so rightly deserve.