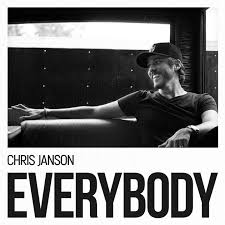 New country albums seem to be blasting out one after another lately, and if you’ve ever seen Chris Janson perform live, you almost expect him to come dancing out of your CD case, that’s where his energy level is.  “Everybody” dropped September 22nd and I’m not dragging this one out.  It’s a “one and done”, meaning, I didn’t have to listen to it more than once to know it’s a winner.  Every single song is listen-worthy.  No skip-overs.  This is his best project yet.  Let’s take it song by song.

“Who’s Your Farmer” co-written by Chris Janson, Buddy Owens and Mitch Oglesby is a pulsating, boot stomping number that grabs you instantly.  It was smart to place this right up there as the first track because it hooks you and has you nodding your head and thinking, “Yep, I think I’m gonna like this.”  It’s got a touch of machismo to it, so just go with it and let the guys be guys. “Who’s your farmer, who’s your roughneck, who’s your curved bill, dirty boots thrown on the back porch redneck…” It’s actually kind of lovable, just give it a listen.  Lovable, in a pounding, grimy, manly way.  A straight up winner.

“Everybody”, the title track, is an outstanding choice for a second track because it doesn’t slow things down.  We take a step higher.  This song gives me visions of Janson running around the stage in his typical style (the man is so much of an entertainer there aren’t many ways to adequately describe him aside from just telling people to go buy a ticket to a show).  Co-written by Janson, Tom Douglas and Casey Beathard, this one is a quirky song with a lot of truths.  “Everybody wanna get rich, but nobody wanna work, Everybody wants to fall in love, but nobody wants to get hurt…” and so on.  It’s upbeat and rest assured, so is Janson when he does this one on stage (spoiler: I’ve seen him do it).  Another hit.

“Name On It”, co-written by some Nashville A-listers, Janson, Ashley Gorley, Chris DuBois and Ross Copperman is such a good song.  It’s a mid-tempo love song where the guy invites his girl to take a ride with him on a night that has her “name on it”.  It’s cool, you’ll know the lyrics fast, you’ll imagine yourself on whatever highway you’re familiar with, in a convertible, on a beautiful starry night.  Yes, it’s THAT kind of song.  I give this one a YES.

“Eyes For Nobody” is where the album finally finds itself slowing down.  Yes, this is definitely a ballad, but it’s got a good beat and I love the arrangement.  To all you engaged people, you might want to take a listen to this one if you’re looking for wedding songs.  The lyrics are just about spot on for that sort of thing.  There, I just added a new hat to my collection.  Wedding Planner.  Seriously though, this song, co-written by Janson and Jeremy Stover is one of the best ballads I’ve heard in a while, and I’m really not much of a ballad person, so when I say I really like one, I really do.  Another thumbs up.

“Fix a Drink” has been jumping out of your radio for quite some time now, and I’m sure you’ve heard it and either you like it or you don’t, or maybe you really haven’t heard it (someone get the smelling salts for these people please).   Guess what?  I adore this song!  What’s not to like about it?  It’s a happy song! I would love to personally shake the hands of writers Janson, Chris DuBois and Ashley Gorley for this one, I just like it so much.  Even if you don’t drink alcohol, so what?  The tune is uplifting, it’s fun, it’s silly.  The world has enough problems, we need a little levity, and this song is all of that.  Go see it performed live and it’s even better.  In fact, my very favorite part of this song, “I can get’cha buzzed, I can get’cha smiling, I can make you feel like you’re sitting on an island…” rolls through my head when I’m starting to feel stressed.  Imagine Chris Janson handing me a frozen margarita, and then another one.  Alright, now I’m feeling that buzz, and I’m smiling and I can picture myself on Key West.  I’m a little better now.  Thanks Chris!  You saved me from a mini-nervous breakdown!  Of course I’m saying all this in jest, but hey, if he ever wants to fix me a drink, I’m in.  This song gets TWO thumbs up!!

“Out There” is a smooth tune just reveling in the joys of rural life.  Where you can do pretty much whatever you want, “out there”.  It conjures up lazy summer days, driving as far as you can into towns you’ve never heard of, until all you see is cows and falling down barns, all the while cranking the tunes as loud as you can.  That’s exactly what this song is about, and we can thank Chris Janson and Corey Crowder for writing it.  Another YES.

“Little Bit of Both” co-written by Janson, Craig Wiseman and Ben Hayslip, this might be my favorite track, even though it’s nearly impossible to choose on this album.  It’s catchy from the first note and it just escalates from there.  Trying to express his feelings about a woman who seems to have a devil on one shoulder and an angel on the other, this song couldn’t be twangier, hipper or more danceable.  Go ahead.  Listen to it.  See if I’m wrong.  Janson’s impeccable harmonica skills are showcased in this song as well.  This number gets a Top Shelf rating.

“Our World” is one I wish we could start using as an unofficial anthem to unite our often divided country.  It’s a fun, upbeat number, but in a way, it has a message.  “It don’t matter what color you are, where you come from, whether you drive a truck or a car, everybody’s welcome underneath these stars in our world, our world, our world…” The song was co-written by Janson, Rhett Akins and Ben Hayslip.  I like the melody and as I said, I love the lyrics.  Winner.

“Bein’ a Dad” co-written by Casey Beathard, Ed Hill and Chris Janson is the album’s tearjerker, if you’re one that’s easily moved to tears.  It’s beautifully written and sung so honestly you really can’t help but believing that every word is nothing but the truth. Chris Janson truly loves “bein’ a Dad”.  This will especially pull at the heartstrings of sensitive older fathers who have adult children now out on their own.  Put this one on the Top Shelf right next to “Little Bit of Both”.  They aren’t of the same stock, but they both belong up there, I can assure you.

“When You Like Me” I liked this one right away, but I had to listen to it twice to “get” it. There weren’t lyrics included in the liner notes, so when I listened again, I actually laughed out loud, and I immediately LOVED it.  This song is so darned good and so brilliant!  The writers, Janson, Casey Beathard and Kelly Roland hit a homerun here!  I’m not even going to give this one away.  Give it a listen and have some fun with it.  Make some room on that Top Shelf!!

“Redneck Life”.  The title says it all.  You can turn your nose up at it if you want, but I can tell you you’ll have a lot more fun if you get on your feet and start dancing to it.  Forget being fancy, get your redneck on and cut loose!  “I didn’t choose the redneck life, the redneck life chose me!”  This song manages to pack more redneck clichés into 2:49 than you can throw a PBR can at.  I would have loved to be in the room when Chris Janson and Mitch Oglesby wrote this one!  Another one I’ve seen done live, and it turns a single song into a party.  You Win! Pick Any Prize!!!!

“Drunk Girl” The title does not say it all.  Co-writers Janson, Scooter Carusoe and Tom Douglas sure knew how to fool us.  It’s slow, but is it a ballad?  I’m not sure if I’d call it a ballad.  It’s not a love song.  It’s more like a lesson in how to be a responsible adult – to music.  It’s clever.  Hey dude, you see that really drunk girl?  You should take her home.  But not for the usual reason.  How about you take her home just to get her home safely?  Then leave.  Yes.  That’s the message here.  Wow.  If even a FEW guys take this song to heart and actually DO the things this song talks about, how cool would that be?  Someone should start a social media page where drunk girls or savior guys could report these happenings.  This song is my other possible favorite.  Thank you writers.  I hope you’ve started something good.  Let’s add another shelf.  A Shelf Above the Top Shelf.  A Penthouse Shelf.

In closing, if we were doing a star rating, this album gets all 5 stars.  It’s got everything.  The writing, the production, the musicianship, the vocals, the song choices, it’s all spot on.  I can’t even say enough.  I see this album going places, and the only thing left for me is to try and catch Chris Janson on this tour.  After wearing out this album, I think I need to find a way to do that.  If not, that may be the only negative I’ve got.  Go buy “Everybody”. EVERYBODY go buy “Everybody”!

Chris Janson is currently touring.  For information and dates go to chrisjanson.com