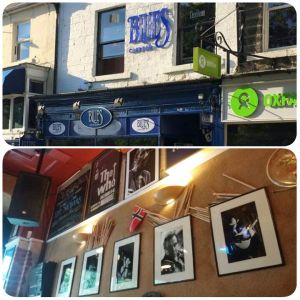 The buzzing hive of The Blues Café Bar in Harrogate was alive with music appreciation and dancing on Sunday Night. Possibly the most kicking small venue I’ve been too so far! With free entry and a bucket passed round to donate to the artists it is definitely worth checking out as funky venue and a great platform for exposure.

Opening the tour was the support act Oli Ng an Americana artist of only 20 years of age with 2 EP’s under his belt.

Having recently ceased employment as a barista to set out on tour with The Chloe Chadwick Band he did a good cover of Springsteen’s No Surrender as fitting to his passion to fulfil a career in music. Playing like no one was watching, he opened with no introduction and kicked off the evening with 2 tracks of his own along with the title track to his current EP Into the Dark and closed his set with an upbeat number from the same EP called Dance All Night, fitting as that’s exactly what the audience did when the Chloe Chadwick Band hit the stage shortly after! 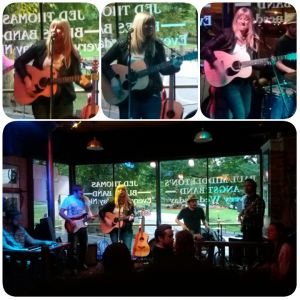 A rocking opening with the tour title track Feels Like Home had the whole rooms attention and everyone applauding from then onwards for every song. The amazingly noise filled room was then up dancing away to a fantastic cover of Amy McDonalds This Is The Life, which the crazy drummer Rick Wilson certainly seemed to be enjoying! Switching back to her own EP with Don’t Be Shy continued Chloe’s charismatic way with the audience as she pointed out we certainly weren’t being! She seemed so at home in the venue and with the crowd.

A great cover of Jonny Cash’s Folsom Prison Blues saw a brilliantly effortless guitar solo from Mark Bushell and Chloe introducing the rest of the band, James Clarke on keys and Nick Bayes on bass and as Tour Manager. Chloe was brilliantly chatty, really engaging with her audience and very amiable. After a cover of Summertime Loving, Chloe explained the tour was to raise awareness of her music before singing Never Change which although on her EP, will also be on her album, due for release later this year, which is great news to me as it’s my favourite track from the self titled EP.

A cover of Gnarls Barkley Crazy allowed Chloe to show off her power house vocals and have everyone ‘crazy’ with dancing as the band jammed away clearly enjoying themselves at what felt like an awesome opening night for them and the tour ahead! Keeping the room on their feet and loving it, next came a cover of Fleetwood Mac’s Go Your Own Way. Chloe thanked Lady Antebellum for helping further break Country music into the UK scene, which originally labelled her as a Brit/Americana act , however she is most at home in, before breaking into an excellent cover of Need You Now. The night was closed with another favourite of mine after a delighted thank you from Chloe, Settle Your Heart.

A fantastic night, in a great venue, with an awesome band! Chloe’s stage charm really shone through and they’re clearly a band who love to perform together and are very talented each in their own right. Playing 8 shows in a week, I’d highly recommend going and really hoping to see them again next festival season! ( Lee )