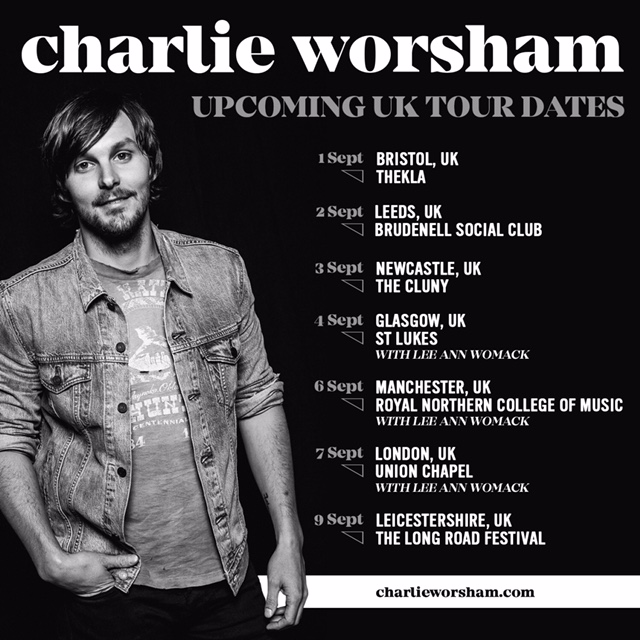 Anyone who has had the good fortune to catch Grenada, Mississippi native, now Nashville resident, Charlie Worsham live will surely agree that he is one of the most exciting performers out there. Please take it from me, as someone who’s seen him several times on both sides of the pond,  that on stage he moves up several levels ( not that his studio tracks are at all shoddy!). His guitar playing in particular has to be witnessed first hand!

One of the hardest working and all round nicest guys around, there are fortunately several chances to catch him back here in the UK this September, when he not only plays the inaugural Long Road Festival and opens shows for the incredible LeeAnn Womack,  but at several recently announced headline shows.

His visit coincides with the European/UK release of his single “ Southern By The Grace Of God” taken from his latest Warner music, Nashville, album “ The Beginning of Things” which among its many accolades was named by Rolling Stone Country as one the best albums of 2017.
This song that pays homage to his roots has always proved popular at his concerts and is appropriately blues tinged.
https://youtu.be/W1qJmSP3ZBc
Charlie has a strong and loyal UK fan base so these shows are bound to sell fast so you’ve been warned! Full tour details are shown below and tickets are on sale now at http://www.charlieworsham.com/tour
Sept 1 – Bristol, Thekla (Solo headline)Sept 2 – Leeds, Brudenell Social Club (Solo headline)Sept 3 – Newcastle, The Cluny (Solo headline)Sept 4 – Glasgow St Luke’s (w/ Lee Ann Womack)Sept 6 – Manchester RNCM Concert Hall (w/ Lee Ann Womack)Sept 7 – London Union Chapel (w/ Lee Ann Womack)Sept 9 – The Long Road Festival – Stanford Hall, Leicestershire
Oh, and can I also take this opportunity to congratulate Charlie on his recent engagement from all the Think Country Team?