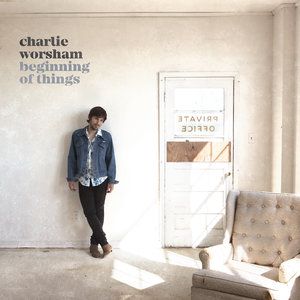 My introduction to Charlie Worsham was at the 2016 C2C festival here in the UK, at the CMA Songwriter’s Series to be exact, when I instantly fell in love with his writing, playing ( he is an amazing guitarist!) and affable personality.

The fact that he was invited to return for this year’s festival is testimony to his popularity over here, and I also saw him play to a packed crowd in London last November when he fitted in a solo show in between various dates opening for Kenny Rogers.

As a result I had heard several tracks from this ( his second) album in stripped back form, and was interested to see how they would sound as fully fledged studio numbers as well as of course being excited about hearing the songs that were completely new to me.

It’s been four years since Charlie’s debut album, “ Rubber Band” and reading between the lines he has seemingly been rather disillusioned ( with the industry? with music in general?) since then as he states on his website that “ I had fallen out of love with music and making this record put me back in love with it ” . Unlike Rubber Band which he co-produced, this time around he handed over the reins, admitting that it was “ a challenge to surrender control “ but with two of the co-producers ( Liddell/Masse) also being responsible for Miranda Lambert’s most recent release and executive producer Arturo Buenahora Jr having countless credits in so many different fields of the music business ( including producing albums for Eric Church and Dierks Bentley ) I’m sure he felt that those reins were in safe hands!
Of the album’s thirteen tracks, Charlie co-wrote nine teaming up again with several high profile writers he’d collaborated with on Rubber Band, including Ryan Tyndall ( with whom he co-produced last time round) Shane MacAnally and Jeremy Spillman. I was interested to see Brent Cobb’s name on the writing credits too, both are from southern states ( Mississippi for Charlie, Georgia for Brent) and although both are now Nashville residents these roots are evident both sonically and lyrically on much of the album.

In fact, two of my favourites from “ Beginning of Things” are the tracks written about Charlie’s background. “ Southern by The Grace Of God” I was already familiar with and I love the picture of the laid back life style he paints….” Hound dog howling and front porch booze, kids run round outside with no shoes or socks”. I like the arrangement too, nothing too fancy just some great guitar picking, a bit of rhythm section and pedal steel, and some subtle backing vocals where needed

Then there’s “ I-55 “, again a mid tempo track with similar instrumentation which I hadn’t heard before, co -written with another southerner ( Georgia’s Ben Hayslip ) it tells of travelling this major interstate highway to return home in order to put things into perspective and take some time out…..” When it all gets a bit too much, my soul feels out of touch I get in my beat up ride and drive I-55….I always leave feeling more alive….” Seems like home is a great inspiration for Charlie!

Lyrically I’m not sure this album is quite as impressive for me as “Rubber Band” , my pick from it it this respect being the more upbeat “ Please People Please”, Charlie’s clever and at times acerbic commentary on his frustrations with the music industry. Having to play the game and fit into the mould that is often expected from an artist isn’t something that worked for him, trying to satisfy everyone is impossible so that in the end he concludes that the best solution is to make music that you like and just be yourself. ” It’s a hard one to swallow, but I’m done trying to follow the pack. From now on I’ll be chasing based on what I feel….” and later on he sings “ There will always be someone to criticise your style, cutting other people down is a means to a miserable end” .The chorus contains clever word play using “ please” both as a request and a verb. This is the one I hear something different in with each listen, it really gets me thinking which is something I particularly enjoy in a song. The follow your heart sentiment on this track is echoed on the current single, the catchy “ Cut Your Groove” , here’s Charlie talking about this one, he explains things far better than I can !!

Possibly one of the main differences between the two albums is that this one contains several lighthearted tracks that bring out Charlie’s great sense of humour including a couple that I have witnessed going down really well live, “ Lawn Chair Don’t Care “ and the album’s closer, “ Take Me Drunk”. The latter is my pick of the fun songs , who hasn’t tripped over their words after a few too many which is exactly what happens here! Relying on the lyrics rather than any complex melody it is such a wordy song, like a drunk rambling on, and it must be a hard one to get right live!! Lines include “ take me drunk I’m home”, “ what’s a drink gotta do to get a guy in this bar?” , “ somebody here take the car to my keys”…..yep, we’ve all been there!!

Not afraid to show his more romantic side, “ For Old Time’s Sake” and “ I ain’t Goin’ Nowhere” are both love songs but very different in tempo and arrangement, the first being a slow waltz with minimal accompaniment and the latter a punchy, uptempo track with a cacophony of sound going on. The former, about meeting a girl in a bar and wanting to woo her in the old fashioned way apparently has it’s origins in a line from the TV series ‘ Mad Men” ! In the latter he tells his partner how he will stick with her through good and bad times, unlike others in her past who may have let her down and walked out on her.

Another one tugging at the heart strings is “ Call You Up”, full of soul both vocally and in its orchestral accompaniment ( strings, brass section included) and it was a real surprise to me to hear this side of Charlie, demonstrating his versatility as a performer. This is one of the few tracks he didn’t have a hand in writing, as is the title track ( same writers on both) which I actually found one of my least favourites mainly because I loved the opening verse and the concept of someone who couldn’t see things through to the end but as a storytelling song I felt disappointed with how it developed.

In conclusion, this is a much more varied album in many respects than his debut was, and as a result may possibly have a wider appeal without alienating his existing fanbase. I’m hopeful that he will return to see us in the UK in the not-too-distant future, he always says how much he appreciates the support he gets here, although he is busy just now with an extensive US tour alongside Warner label-mate Brandy Clark ( hopefully winning over her fans!)
I’m sure I’m not the only one to be very happy that Charlie has fallen back in love with music and let’s keep our fingers crossed that this is one love affair that will stand the test of time!