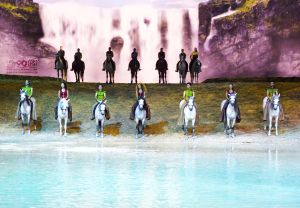 Media Preview Day at Cavalia “Odysseo” in Nashville was held on August 29, 2017. The big white tent, or The White Big Top, as the production calls it, is easily visible from the highway, yet is highly unassuming as you drive up to it on the dusty grounds of Gaylord Opryland. This doesn’t “look” like anything very special. There are colorful banners adorning the parking lot area, depicting costumed horse riders, but all in all, we were parking somewhere that resembled the average county fair lot.

After a brief lunch, we were ushered into the actual theater tent. This tent is fully air conditioned. It holds tiered seating. It’s quite large and airy, and there was absolutely no “horse smell” if you get my meaning. I was already surprised. Not at all what I expected. I guess my mind was gravitating toward old time circus tents.
We were given a quick rundown of the rules, of which there was only one. No flash photography as it would frighten the artists, both two legged and four. Understood. The show began promptly with a troupe of acrobats that came flying into a very large ring from every direction. The music was upbeat and so were these athletic entertainers.
Acts that followed included several beautiful white horses following a female artist to a soothing soundtrack, and a carousel surrounded by acrobats who clung to its poles in death defying poses, as a lovely Italian singer named Valentina sang a gorgeous song. 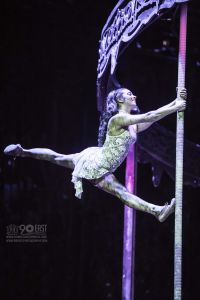 The horses, of course, are the main attraction, and I refuse to give away the rest of the show, but I will say the special effects and the riders are incredible. Everything about this production is spectacular and it’s apparent these animals are treated with the utmost in loving care and respect. I won’t tell you exactly what happens, but I will say this compassionate treatment is even incorporated into the show. Making sure the horses are happy and enjoying themselves is part of “Odysseo”. If you can’t believe this, you’ll need to see it for yourself. If you’re in Nashville while this show is running, don’t miss it. It’s a great diversion! 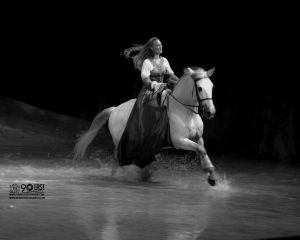 Check out our photo gallery Here

Tickets and information are available at cavalia.com