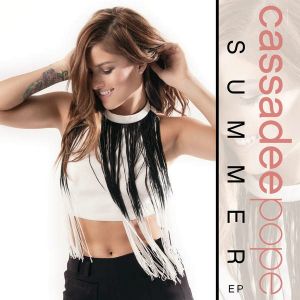 I, like many others, have been waiting for new music from Cassadee Pope for a long time. Her debut album, Frame By Frame, was released back in 2013, after she won the US version of The Voice. She hasn’t really been on the scene much since then, apart from the release of her single I Am Invincible. This isn’t really my cup of tea – it isn’t a bad song, but I felt it was a bit far removed from her usual style and was a bit euro-pop sounding.

Frame By Frame was such a good album it is almost hard to top. Not only does the album have strong singles such as Wasting All These Tears and I Wish I Could Break Your Heart, but it also has even stronger tracks, such as 11, You Hear A Song and Champagne.

I was expecting Cassadee to release an album after I Am Invincible came out, but for some reason it never happened. I was also surprised to hear that Cassadee was releasing an EP this year, rather than an album, as usually an EP is a pre-release prior to an artist’s album to get a bit of a feel of how well it does chart/radio wise. That being said, I assume it is something to keep the fans satisfied until her next album and to keep her relevant. I don’t think it will exactly harm Cassadee’s career – in fact, the timing of this release is perfect, because she just had a number one single hit with Chris Young on their duet Think Of You.

This EP, titled Summer, still holds a similar style to Frame By Frame, but shows much more maturity, both musically and lyrically. I am really enjoying it and I will put I Am Invincible behind me and say Cassadee is back! This EP is everything I love about Cassadee.

Cassadee’s voice is very distinctive; her voice is well suited to modern Country as it’s young, fresh sounding and has that pop – punk style, which is probably why she fronted the band Hey Monday!, before going solo.

Summer – the title track to this EP, is very current and I can imagine it being played all over the CMA festival this summer! It is a very uptempo track and has a similar style to the kind of songs Dan + Shay record. This is Country Pop as it should be, fun and easy to sing along to – apart from the fast paced second half of the chorus, which is almost like rapping.(It isn’t rapping but I am sure there is a musical term for it which I just don’t know – feel free to tell me!)

Piano – a slow tempo song to start and then breaks into a mid – tempo chorus. Parts of the song sound a bit similar to Miley Cyrus’ Wrecking Ball. There is a nice scale range vocally in this song. It is definitely single-worthy.

Kisses At Airports – the ballad of the EP. This, like Summer, is very current with today’s Country – Pop. It is a very nice song with a simple but sweet melody.

Alien – a song about being an outsider, different or isolated. I do like the lyrics to this song as it’s very inspirational and I think a lot of people, especially teens, will identify with it. A very catchy song again and I really love the chorus.

Overall, this is a very good EP with four strong songs which could easily all be singles. Cassadee co-wrote all the songs on the EP, apart from Kisses At Airports. It is produced by Corey Crowder, who also produced Chris Young’s most recent album which, of course, features his number one hit duet with Cassadee –Think Of You.