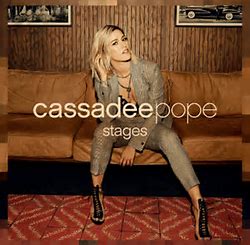 Right back when I heard at the time my fave song in my punk days, How You Love Me Now by Hey Monday, did I ever think the lead singer would become one of my fave country queens but she did! The moment I heard Wasting All These Tears I was hooked and to date is one of my alltime favourite songs! Fast forward 6 years, after putting her stamp firmly on the country music world already she is finally ready to release her eagerly anticipated follow up album to Frame by Frame. Pope is one of the most incredibly talented yet so down to earth country artists I have ever had the pleasure of meeting! Expressing that rollercoaster of emotions she has been on this past year in the making of her sophomore album, Stages, which was released this weekend here’s our pick of the songs to listen out for and why!

First up Take You Home, this is Cassadee’s first song after leaving Big Machine label where leaving has given her the creative freedom to be exactly who she wants to be. This first song after leaving the label she used to call home is Cass’ chance to reintroduce herself and show her fans exactly who she wants to be now she has been given her freedom and this track expresses exactly that! The catchy upbeat track is the perfect way to kick start the 11 track album!

One More Red Light follows, Cass’ second single from the album, the intro to this song instantly grabs you! Highlighting the excitement of the start of a relationship where you never want to leave each other and will do anything to steal a few extra moments before saying good night by hitting one more red light! Cass has always said she never wants to lose her pop rock side and with this banger you can definetely see the pop vibe and influences throughout the track!

Midway through the album after the high energy upbeat start is the time to slow it down a little with the heartbreaker of a track, I cried on first listen, If My Heart Had A Heart, her new single cowritten by singer songwriter Hannah Ellis and Shay Mooney providing backing vocals! This beautifully written ballad shows Cassadee going back to what she does best killing a ballad with her stunning vocal, this song has similarities to what she shown with Wasting All These Tears. This track strips Cassadee bare and produces a very vulnerable side to her completely! You can tell through the track the heartbreak she must have experienced to produce such a heartwrenching track! The addition of one of the most incredible vocalists around at the moment, Shay Mooney, is just perfect too!

FYI took me quite a few listens to get used too, its not the most usual country track am used to hearing but one things for sure it shows a much more sassier side to Cassadee, getting her revenge on the guy who tried it on with her by giving his girlfriend a heads up!

Distracted another upbeat catchy track by Pope is probably one of the standout tracks of the album for most and that’s not just because the female empowering trio consisting of best friends Lindsay Ell, Lauren Alainaand Rae Lynn lend a hand on vocals! The funky beat and vibe and catchy chorus just makes you want to dance and sing along and am sure its definetely a contender for her next single.

Not necessarily a song as such but I wanted to mention so everyone pays attention to the beautiful instrumental of Gavi! What could be a better way to honour a dear friend, well Cassadee has made the perfect tribute to her friend Jason Gaviati who sadly passed away by including him on her album performing an instrumental he sent to her before he died! Am not really a fan of instrumentals myself but the composition is enough to make anyone listen! It truly is beautiful!

Final stage of the album and it climaxes on I’ve Been Good this is the song that shows the hurt and heartbreak Cassadee has felt during this rollercoaster of a year but kept it all to herself painting the picture that everything is fine and bottling everything up and living a lie! The raw emotion expressed through her vocals and the truth in the lyrics of this track just shows what a turbulent year she has had to face!

As we all know Cassadee has come out of it fighting and is now in a much more happier place thankfully, thanks to a certain Sam Palladio and she is now ready to hit the road on the CMT Next Women of Country tour! We are still awaiting for a UK date to be announced over here but am sure it wont be long till she’s back again! Until then just put this album on repeat like I have done this past week since getting my hands on it!

Lenny Martelli – Where Tragedy Got Sacked by Grit & Co...