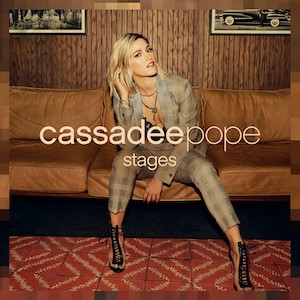 Grammy-nominated singer-songwriter Cassadee Pope premieres powerful new single “If My Heart Had A Heart” ahead of the February 1st release of STAGES, which Billboard has declared one of the “40 Most Anticipated Albums of 2019.” Following previously released tracks “Take You Home” and “One More Red Light,” which celebrate the excitement of new love, the emotional ballad offers listeners a glimpse into a different side of STAGES, encapsulating the vulnerability and pain of heartbreak.  Listen to “If My Heart Had A Heart” here, and pre-order STAGES here.

Cassadee will count down to the release of STAGES on January 31st with an intimate performance at Nashville’s Ole Red. The event will begin at 10pm CST, and will stream live via Cassadee’s Facebook. Cassadee will continue celebrating release week with her TV debut of “If My Heart Had A Heart” on the TODAY Show on February 6th before returning to Nashville for a performance at the historic Grand Ole Opry House on February 9th.

STAGES, produced by Grammy-nominee and longtime collaborator Corey Crowder, is a collection of 11 original songs that narrate Cassadee’s journey over the past few years. After facing hardships in both her personal and professional life, Cassadee turned to songwriting as a form of healing, and the result is an empowering body of work by an artist making music for herself, on her own terms. “I really don’t know how I would have moved on with my life without this album,” confides Cassadee. “In the past, I made records I thought everyone could relate to. This time, I didn’t think about that at all. I wanted to tell a story of my truths and perspective on how I approached life in hopes that the messages reach someone who may need help in their own stumble.”

Cassadee will tour the US extensively in support of STAGES this spring, joining Maren Morris on the first half of her “GIRL: THE WORLD TOUR” and headlining the “CMT Next Women of Country Tour.” Cassadee’s tour dates with Maren will kick off March 9th in Chicago, playing major cities across the country including Nashville, Denver, and San Francisco, before wrapping in Los Angeles. Cassadee will then be joined by fellow “CMT Next Women of Country” Clare Dunn and Hannah Ellis for her 11-date headlining tour in April/May, including a sold-out night at NYC’s Gramercy Theatre.