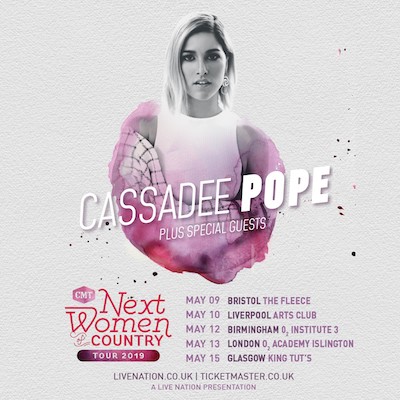 Following the success of her brand new album ‘Stages’ – released in February to an overwhelming response from fans and media –  country star Cassadee Pope has confirmed she will be extending her CMT Next Women of Country tour to include five UK headline shows in May, kicking off on May 9th in Bristol. This will also be the first time the CMT Next Women of Country initiative has expanded outside of the USA:

This is in addition to an eleven-date headline US tour under the same banner, starting April 11th in Pope’s home state of Florida, after she wraps her current national tour with Maren Morris. These dates will also mark her debut UK headline tour as a solo artist, following an appearance at C2C Festival 2017 and two performances as part of Country Music Week in London last year.

Check out the lyric video for current single ‘If My Heart Had A Heart’:

ABOUT CMT’S NEXT WOMEN OF COUNTRY:
A staunch advocate for country music’s female artists, CMT first launched its “Next Women of Country” campaign in 2013 in an effort to support and expose developing female talent, both signed and unsigned, in a male-dominated format. The campaign showcases emerging female artists across all CMT screens throughout the year, and in five years since its launch, CMT has expanded the initiative to include five CMT Next Women of Country Tours, anchored by superstar acts including Jennifer Nettles, Martina McBride and Sara Evans, a CMT.com digital series, Next Women of Country Live, and more.