‘The Storyteller Tour’ Stories in the Round at the T-Mobile Arena, Las Vegas
26th November 2016
Support from The Swon Brothers & Easton Corbin

What could be a better holiday in America than the call of the bright lights, one dollar drinks and promise of a big win on the slots in Las Vegas? Obviously, the last one never happened but the announcement of Carrie Underwood playing the T Mobile Arena on the day that I was celebrating my anniversary in fabulous Las Vegas was a win win.

From the minute I entered the arena area, the buzz was electric. Groups of adoring Carrie fangirls gathered outside, donning spectacular cowgirl boots and hats with immaculately coiffed curls and perfect skin. I, as a contrast, had been traipsing up and down the strip for hours earlier on, determined to bag my Black Friday/’Whatsitcalled’ Saturday deals, sat on a bus there and back to the ‘Boot Barn’ and tried on around 50 pairs of the best cowboy boots I could find, eaten a good portion of The Cheesecake Factory and probably looked like I’d been dragged through a hedge backwards. Hey, when in Vegas…! Entry was via ‘airport –like’ scanners and the security was well managed AND polite with the staff wishing us all a great concert. Some UK venues could learn a thing or two from the ease of expertise I witnessed. I’d managed to secure tickets in the Premium Jack Daniels Lounge back in the UK so we had superb seats and exclusive bar, which seemed like a good idea at the time until it was time to buy a JD & Coke, which set me back about 15 dollars. I’ll never moan about the O2 prices again. A can of Budweiser Lime purchased for about a fiver equivalent (looking at the size of the can just made you want to use the Ladies room) and I was ready to rock!

The Swon Brothers burst onto the stage like a pair of mischievous schoolboys to a round of rapturous applause. These boys are so personable and put on a great show. They are previous ‘The Voice’ contestants (finishing in third place) and it’s easy to see why Blake Shelton championed them. I surprised myself with how many of their tracks I actually knew, the most well-known of all of them probably being ‘Later On’. Zach & Colton were high energy and having an absolute ball – I’d definitely look out for them over here as a UK tour would be well received. Their voices and guitar playing was faultless and they won the crowd over during their short set.

Easton Corbin was up next. There is no faffing around between acts – just enough time for a quick visit to the bathroom and a beverage pit stop and the music rolls on. Easton provides no frills country music – just what it says on the tin. He sings his way through hit after hit, chatting sporadically about what a great time he’s having on the tour and how, after losing a bet with his band mate, he’s at his mercy as to singing a choice of his colleague’s – and then throwing himself into a cover of Justin Bieber as his punishment. The verdict? It’s actually a great cover! The boy next door image culminates in the performance of two stand out tracks which get the whole crowd singing – ‘I’m All over the Road’ & ‘Roll With It’. ‘Are You With Me?’ achieves the goal of getting the whole T-Mobile Arena awash in a sea of phone lights and he’s clearly loving every moment and so are we. I’d love to see Easton at C2C as I think our UK audiences would lap up the honesty and down to earth likeability of his performance. I feel that he hasn’t set the country world alight yet and is on a slow burn but his fans are quite happy to smoulder until the fire ignites. 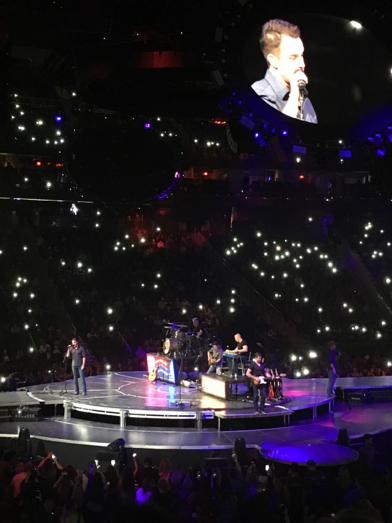 Carrie Underwood, or rather the new Queen of Country Music as she is now introduced. It really is a joy to behold how far she has come from winning American Idol in 2005. The fresh faced, all-American girl who now has cornered the country market in revenge & retribution songs. No-one can sing about abuse, pain, sweet revenge and love for life with the power and sheer visceral believability of Carrie Underwood. Her performance at C2C in London this year had only semi prepared me for the mind blowing show she was about to put on tonight.

The 110 minute set, in the round with a 10 piece band, contained approximately 22 songs. The staging of the set is such that no matter where you are seated in the arena you get a bird’s eye view of the action, it really is genius. The centre stage slowly rotates during each song so every member of the audience gets drawn into the performance and while Carrie’s back is turned, the huge crystal- clear screens give a flip side view of the performer. A trio of circular video screens constantly rotate and are perfectly in sync with Carrie’s voice throughout the show. She appears atop these as she enters the arena to the strains of ‘Renegade Runaway’ and the hits just keep coming, one after the other, practically falling over themselves to prove that Carrie Underwood is holding court and like it or not, she has now set the bar that the other women in country need to raise to. She races through the best tracks on ‘Storyteller’ before digging into her solid back catalogue and reaches a pinnacle halfway through her set with ‘Blown Away’ as material tornados raze the stage and build the crowd into a frenzy. 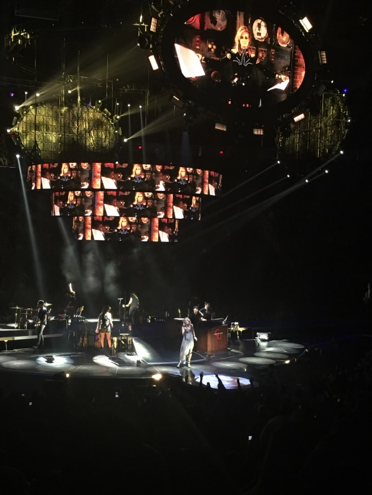 Everything about this concert is truly spectacular – from Carrie’s incredibly powerful voice, vocal range and set. More gritty tracks follow including Two Black Cadillacs, Dirty Laundry, Church Bells and then some classic ‘oldies’ including a truly heart-renching rendition of ‘Jesus Take the Wheel’ which brought me to tears. I have to admit that I wasn’t expecting that reaction, maybe it was the Budweiser I’d consumed (which my mortified husband blamed it on!) but between you and I, the sheer emotion of the delivery of this song paired with the emotionally charged lyrics and I was a goner. Tears were literally streaming down my face such was the power of this song and even her incredible rendition of Dolly Parton’s ‘I will Always Love You’ couldn’t touch me the way this did. Thank god for an upbeat, feel-good version of Alabama’s ‘Mountain Music’ with The Swon Brothers & Easton Corbin joining Carrie on stage and most of the audience jumping up to dance in their seats. There was a sense of magic on the stage as the party atmosphere continued with an unstoppable Carrie indulging in a magnificent harmonica duel on ‘Choctaw County Affair’. ‘What I Never Knew I Always Wanted’ was a humbling moment as Carrie crooned over dozens of photos of her husband and son, proving that she really has grown up and turned into a truly inspiring and content ‘woman of country’ and mother. She has the balance that so many spend a long time trying to achieve. ‘Little Toy Guns’, ‘Before He Cheats’ and ‘Something in The Water’ brought the night to a spectacular conclusion, in an flurry of excitement, crowd selfies, the ‘Carrie Cam’ and complete satisfaction on my behalf. 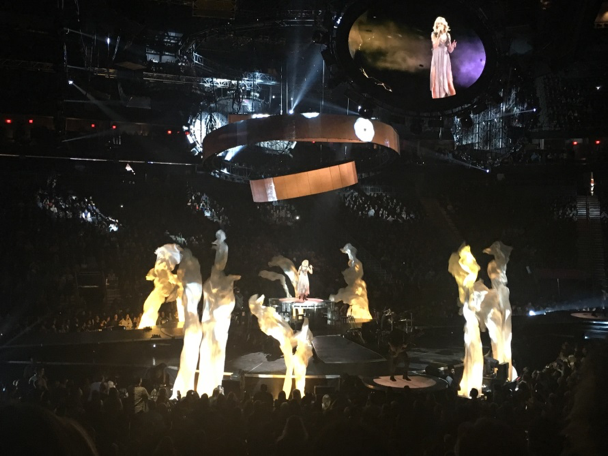 I really did not want this night to end and could have sat there quite happily all evening being literally ‘blown away’ by the sheer powerhouse and beautiful, inspirational woman that is Carrie Underwood. She totally deserves her recent CMA award for Female Vocalist of the Year, in my opinion it is long overdue.

However, all good things have to come to an end – Las Vegas, thank you for the memories. I have come back with lighter pockets than I started out with but am much richer from the experiences and mark that you left on my heart. The National Rodeo Finals were arriving at the MGM Grand the week after I left Las Vegas but I feel like I’ve already had the ride of my life. Till next time….