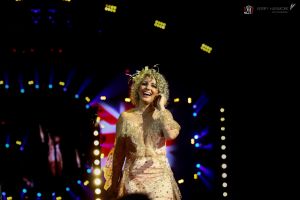 Cam, a breakout act on the Country scene after releasing her single ‘Burning House’, cheers filled the arena as she took to the Satellite stage with her band mates Simon Mårtensson and Anders Mouridsen. Her first song was ‘My Mistake’ a great track that starts of completely acapella, a great way to introduce herself anyone in the arena that was not already aware of her music. One thing I love with Cam is that whenever she is on stage performing she always has a big smile on her face and it makes the performance so refreshing to watch! 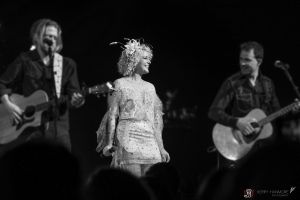 I was really nervous and I thought, what should I wear? I thought… What would a British Dolly wear!?…. This is it!

Half Broke Heart was up next as her backing went from 2 guitars to 1 guitar and a banjo, with both her songs at this point most of the audience were joining her with every word. It was however the final song of her short set that I could see everyone had been waiting for. Before she began, Cam, made a request to the audience that if they had lights to hold them up for this track and as she thanked everyone for having her there her guitarist broke into the beautiful, riff that is the musical body of ‘Burning House’. As she got to the end chorus Cam held the microphone out for the audience to take the lead and the whole arena filled up with the chorus being sung back to her. It was a great thing to be part of! Cam is a big favourite for me and it’s great to see her getting that sort of recognition over here!

Bring on another UK tour and check out her latest album ‘Untamed’!