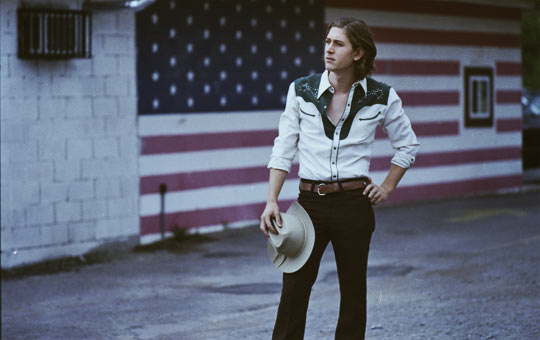 This is the 1st time I had been to a gig in this historic building & I was quite excited to be going.  Even more so as I had only made up my mind a couple of days beforehand that I would go, due entirely to the fact that I should have been going to see Brantley Gilbert that night & he cancelled with less than a weeks notice. So I was shocked to find that the event sold out.  Disappointed I rang the venue & spoke to them direct, they confirmed not only was the gig indeed sold out, but had been for some time!!  I was put on the list for returns if anyone couldn’t go last minute.  11.30 the next morning (the day of the concert) there had been a return  & I had a ticket.  I am very sorry someone had to drop out, but incredibly grateful.

I walked into the venue and I was amazed that I was going to see a heavily tipped artist to watch out for in such an intimate venue.  Seats were set out, but even if you were at the back you would be able to see easily as the venue has a strict capacity limit of 100.  The stone walls and high ceiling of this building makes it a wonderful acoustic venue.

Starting us off were Rebecca and Simon Roselly from The Rosellys, although Simon did point out they are not brother & sister & they are not married, they are however boyfriend & girlfriend.  There are normally 5 members of this band, but tonight it was just these 2 guys.  They started with both of them playing guitar with Only Way She Knows from their One Way St album.  Immediately your toes were tapping and your head was nodding.  Rebecca is main vocalist, but Simon’s facial expressions as he plays are marvellous!  After two more songs Simon put his guitar down & picked up his fiddle.  Rebecca explained he was more of a fiddler than a guitarist & Simon added it was the instrument he 1st learnt to play. 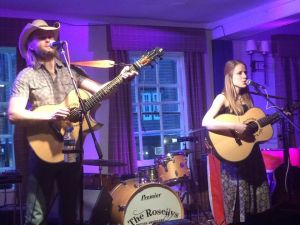 They played a song called Queensland Sky which is about the sinking of the HMS Pandorra, the ship that was looking for the mutineers of the HMS Bounty (curiously the ship actually set sail on its mission from Portsmouth!)  Rebecca herself said it was a depressing theme, but there was nothing depressing about either the tune or the performance and with Simon’s foot stomping it had a real beat to it.  When they finished Simon apologised and said he was used to moving around on stage a lot more but was restricted by the smaller stage.  He did warn the people on the front if he fell off not to catch him as he is heavier than he looks!

Asheville 1784 and San Antone finished their set and left me for one wanting more.  I will certainly be looking out for these guys and I hope to see them again.

Cale was introduced by the organiser Ken who said that he had heard someone describe Cale as sounding similar to Johnny Cash before he was signed.  This is not the 1st time I have heard this description either!  Listening to his CD before I came to the gig, I am sure I could be forgiven for thinking I had mistakenly got into a time machine and been transported back 50 years!!  There is no doubting at all that Cale IS Country music!

Cale walked on to stage & apologised as he said he needed to tune his guitar, he had been here 4 hours but hadn’t thought to do it before now (his words) so as he was doing that he told us a story about splitting the zip on his pants (trousers for us Englishers!!) at the ACMA award ceremony earlier this year.  Now Cale is not a bulky lad, the word beanpole springs to mind.  Apparently however he was wearing pants (trousers!!) that were too small for him (were they child’s size??) & the zip broke.  Because the pants (trousers) were so tight he had to wear a blazer for the rest of the night & wrap it around him.  Apparently it was a memorable night, but for all the wrong reasons!!

Guitar tuned we were off with Long Time Gone.  (I am not sure this is the title of the song, I can’t find it!!)  It was a real up tempo song and a great way to start.  Gonna Love a Woman followed, I love the lines in this song ‘If you are going to make a dollar, she’s gonna spend 2’!!

This song has the feel of Chicago Ragtime music during prohibition!  During the 3rd track, Long Gone Girl, the steel pedal guitar has a real strong presence and sounded very poignant.  Like most solo singers, when on tour Cale needs a band.  He had 3 guys supporting him tonight.  On the Steel pedal guitar was Brett Resnick and Cale asked for appreciation for Brett several times.  Now I personally struggle with the sound of this instrument, but WOW Brett can play!  Sitting in the 2nd row, it set my teeth on edge once or twice, but it bought me out in goosebumps more times!!

Next was the title track to his latest album Careless Soul.  After most tracks Cale had a few words to say, which shows the personality of the performer.  A couple more tracks and Can’t Feel Love was started, only to be abruptly cut off as Cale had knocked over his bottle of beer with his guitar cable.  I had looked at that 5 minutes before & thought he is going to knock that over, so I may be to blame for that!!  He quickly called for housekeeping, then laughed, apologised & said he wasn’t that much of a diva & I am sure I heard him say ‘yet’ under his breath!!

Cale then introduced the next song, Somebody Save Me and said ‘this is a proper Country song, it is about cheating’ & he didn’t mean at cards!!  Today’s Country music artists have moved away from the old style songs and these days it is usually the women singing about men cheating on them.  Cale sounds proud to be bringing it back!

After the next track Easy, Cale said they had played London the night before.  He asked if anyone been there, the guy the other side of me whooped!  Cale was sooo happy someone was a ‘double goer’!  He did say that London had been a real party and actually Portsmouth was a bit of a relief as we were sat down, he could see us and it was a more relaxed atmosphere rather than the party atmosphere last night!!  He also said it was great to be touring & doing so many dates & they were all only an hour away!  He has a shock when he travels to Lewes the next day, that is 2 hours away!!!  He also suggested we go for a swim in ‘the ocean’ at the end of his set!  Although it had been a gloriously hot day, he obviously hadn’t paddled in the English Channel when he suggested this!!

Andrew Hunt on bass guitar was then introduced and the tempo was slowed right down with Get Out of Town & Old Time Blue.  The next track I nearly fell off my chair when Cale yodelled!!  Going to California (once more I can’t find this track!!)  started and finished with Cale yodelling.  When was the last time you went to a concert & the guy yodelled??  I have been to many MANY country music concerts (Garth Brookes, Toby Keith, Tim McGraw), not EVER heard a yodel!!  Watched Billy Connelly go round America on the train on TV recently, he featured an old guy yodelling I thought what on earth??  Cale yodelled & I yelled YEEHAH!!

The final member of the band Pete Lambert the drummer was then introduced.  Pete was with Cale last time he came to Square Roots, but Cale pointed out he is a singer songwriter in his own right and said to him your turn, what do you want to sing?  I think I can be forgiven in being disappointed when he chose to sing a Hank Williams number – Cold Cold Heart.  Don’t get me wrong, it was a brilliant rendition, but personally I would have preferred to hear something from his own repertoire, but Hank Williams is in keeping with Cale’s sound, so I think he can be excused!

Brett and Andrew then left the stage and Cale asked Pete to come forward and stand with him as they both sang 2 songs, with just Cale’s guitar accompanying them.  One of the songs was Oaxaca, which is NOT pronounced as it is spelt at all.  He explained that this song was about falling in love with a woman, leaving her, only to decide you were wrong, writing to tell her so, to receive a letter back saying she had committed suicide!!

Brett and Andrew then came back and the mood was taken up tempo again with Honky Tonk Moan.  Railroad Blues was to be his last number, but the crowd were having none of that.  We were not finished with this young man!  As a result he came back on his own with his guitar and sang Not Missing You.  The other guys then also came back and the night finished with Why You Been Gone So Long.

This was a fabulous night of music.  Cale is only 25 years old, but has a sound that transports you back in time.  He tells amusing anecdotes between numbers, showing a confident young man.  He has been tipped by Rolling Stone magazine as an artist to watch out for.  I for one certainly hope so and not only did Cale gain a new fan that night, I took to Facebook afterwards and several of my friends went to see him in Lewes the following evening (one of the girls was from Portsmouth as she too decided too late to go & could not get a ticket for Square Tower) and now several other people who would not normally have gone are going to other concerts that he is doing on this tour.

Cale’s latest Album Careless Soul is out now from all the usual retail and web sites.  If you haven’t done so yet, go buy it!