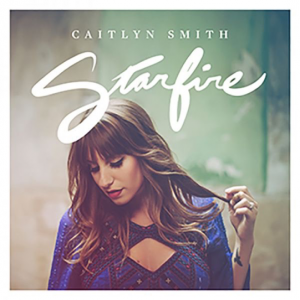 Hailing from Minnesota, Caitlyn Smith has spent several years in Nashville as a songwriter. Some of her songs have been recorded by Jason Aldean, Garth Brooks, Lady Antebellum and Rascal Flatts to name a few. However perhaps her biggest achievement to date was scoring a number hit with “Like I’m Gonna Lose You”, a duet recorded by Pop sensation Meghan Trainor and John Legend.

Caitlyn’s EP, which is simply titled “Starfire”, is a collection of five storytelling tracks that demonstrate not only her gift for songwriting, but also her authentic vocals and guitar playing too
The first verse of opening track,”Before You Call Me Baby” is softly sung, as she looks back on a time before her lover came into her life, before effortlessly belting out the chorus. It’s a memorable song and provides a pleasant introduction to the EP. Talking about the aftermath of a breakup on tearjerker “Do You Think About

Me”, Smith fails to disappointment with her emotive vocal delivery and it’s one of my highlights from the record. “Tacoma” was written with Bob DiPiero and recorded by Garth Brooks for his album ‘Man Against Machine’. Here Caitlyn’s vocals soar to a a whole new level, proving she has an exceptional vocal range, backed up by an electric guitar and beautiful strings. She describes this vulnerable track as “a very, very special song”. Typing Bob’s office address into Google maps, it took her to Tacoma, Washington, which inspired the title of the song. “Throw me out I’ll just burn brighter, no you can’t burn out this starfire” she proclaims on title track “Starfire”, a song of resilience. Closer “This Town Is Killing Me” is my personal favorite. Here she sings about the struggles of being in Nashville, yet somehow knowing that she’ll wake up tomorrow and do it all over again, despite all the obstacles that stand in her way.

“Starfire” is full of honestly and with Caitlyn’s ability to capture her audience it’ll be sure to leave a mark on anybody who listens. It’s by far one of my favourite country releases this year and I can’t wait to hear what’s in store on her debut album, which will be released next year.