A man that is no stranger to playing shows in the UK as his appearance at this years C2C Festival will be the 5th trip across the pond for Texan singer-songwriter Eric Paslay. The literal definition of the term “gentle giant” who towers over the majority of people but the first thing anyone that has ever met him will tell you about him is that he is a “nice guy” which we fully endorse from when we caught up with him last year so much so that his most recent tour to Europe in September last year was called “The Nice Guy Tour”!

A highly accomplished performer and vocalist who was Grammy nominated in 2016 for Best Country Duo or Group Performance when he joined Dierks Bentley and Lady Antebellum vocalist Charles Kelley for “The Driver” which Paslay co-wrote and was the title track on Kelley’s debut solo album. This isn’t the only link however to Lady Antebellum as Paslay also co-wrote the tracks “It Ain’t Pretty” and the title track from their “Golden” record along with “Famous” on “Heart Break” whilst on their third studio “Own the Night” the trio included a version of Paslay’s feel good top 5 smash hit “Friday Night”.

This is not the only place you will be familiar with the master craft that Eric Paslay possesses as a song writer as “Barefoot Blue Jean Night” recorded by Jake Owen, “Even If It Breaks Your Heart” by Eli Young Band along with Love and Theft’s “Angel Eyes” all were number one songs you may be familiar with that were written by Paslay who has has also had songs recorded by the likes of Steven Tyler, Clare Dunn and Rascal Flatts.

However Eric Paslay as a performer himself brings his smooth voice and charismatic stage presence that attracts more and more UK fans with every visit as he wowed fans on the main stage at last year’s The Long Road Festival and his most recent release “Live in Glasgow” is a live album that was recorded on these shores which you can listen to HERE and fans will not just get to hear him live in Glasgow, but also live in Berlin, Amsterdam, Dublin and opening the show in London at this years C2C Festival! 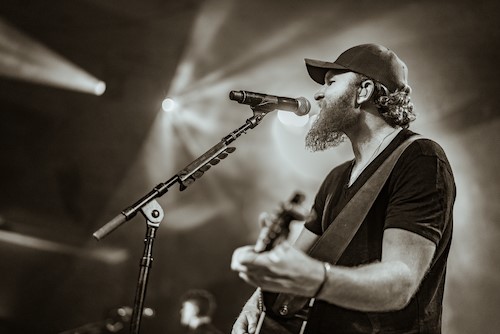 Eric Paslay plays the main stage at C2C Country to Country in Berlin, Amsterdam, London, Glasgow and Dublin joining Abby Anderson and Tenille Townes as part of ‘Introducing Nashville’ in addition to this, Eric will return to the UK for dates in April, May and June when he will be joining The Shires on their upcoming UK tour. You can keep up to date with Eric and find full details of further tour dates on his website and socials: