For a weekend in June, Whitebottom farm, not far from Manchester, is transformed into a festival site for Country music fans.  Acts performing over the weekend include artists from both the UK and the US.  The festival officially starts on the Friday but Karl & Jan, the organisers and owners, allowed you, under prior consent, to arrive Thursday afternoon.  For people like myself travelling a distance (Southampton!) that was quite a benefit because it is a long drive, so better to get there a day early and relax knowing that you are there in time the next day for everything.  As it was I got caught by traffic and an accident on the M6 and I ended up arriving at the campsite over an hour later than expected.

Driving up the road towards the campsite you are struck immediately about how beautiful the setting is.  You drive up a little lane with trees on one side and the most beautiful river on the other.  A little bit further up & you drive past a waterfall!

I was met at the entrance by Jan, given my wristbands and shown to my Glamping tent.  The tent sleeps four comfortably and six at a squeeze, although once I had got all my stuff in I was not sure that there was going to be room for my friend!! 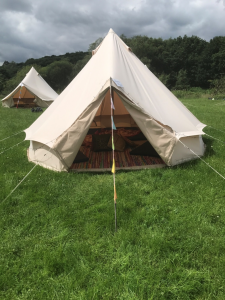 Once I had unpacked I took a walk around the site. The two stages were still being set up but the bar looked fully operational to me – in my experienced eye that is!!!

As so many people had arrived early Karl, decided to open the bar early, apparently needed to make sure it was all fully operational! I don’t mind what the excuse was as long as it was open!! 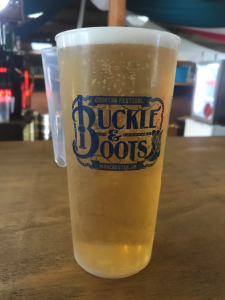 While we were standing around chatting, Darcy‘s father – Ray Crawford, started to set up a microphone and some speakers, we were obviously in for an impromptu entertainment session.  Once they were set up Ray introduced his friend Dave. Dave took to the keyboard and played a few numbers.  Dan Schofield (DJS Photography), who had turned up with his partner Eva and their seven month old baby, Zoe last minute, was doing his usual thing of running round frantically taking photos!  Every time he tried to take a photo of Dave he stopped playing and posed for him!!  For those of us used to seeing Dan running around taking photos like this it was quite amusing.

Dave played a few songs, including a couple of Chas and Dave songs which actually went down quite well I think because people knew the words and could quite happily sing-along!  He asked if we had any requests & somebody shouted out Friends In Low Places.  Dave appeared to know the tune but not particularly the words, he changed the first verse completely, he got the chorus right but then sang the second verse as a chorus!  He then asked why we weren’t joining in!  It was really funny!!  He then sang Irish Rover which made me laugh because it’s Country but the wrong country!!!  He finished off with Show Me The Way To Go Home.

Ray then took to the microphone saying that he was a stand-up comedian, he said that he was Australian and he was going to amuse us with his redneck humour.  He apologised before he started in case he offended anyone.  He was actually very funny and it was the right sort of set for that time of night and the crowd.

When he finished he got Darcy to come up and Darcy then proceeded to entertain us with a few covers including Wagonwheel to get us to all join in, Drink In My Hand, Toes In The Water and a couple of Chris Stapleton numbers.  It was a great set, especially bearing in mind it was impromptu and not prepared (as far as I am aware) for. 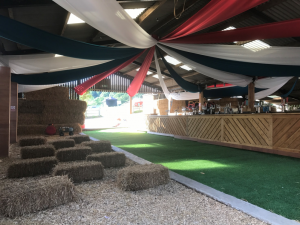 Friday morning I had a proper wander around.  As I say, my friend & I were Glamping.  For us it is worth paying the extra money to have someone else put your tent up for you & then take it down again afterwards – especially if it is raining and as we are on Glastonbury weekend, the chances of rain are 100% probable!  There was a toilet block in the field – a proper toilet block, not a single portaloo to be seen at this festival thank you very much!  Not only that there were showers – free showers!  Have to say though, you did play pot luck as to whether the water was hot, cold, freezing or intermittent warm & cold!  There was also power point in the shower block, for hairdryers and straighteners etc, these also provided the opportunity to charge your phone!  Only thing missing really was that the shower cubicles could have done with a couple of hooks for you to hang your towel & underwear on whilst you were showering.

The festival site was made up of 4 areas.  As you walked in from the campsite, the first area was a barn that housed the bar.  The actual bar was quite high & me at 5’2” could only just see over it!  I will say 2 things here; the bar was incredibly reasonably priced – £3 for a pint of lager.  Bearing in mind you are there all weekend, you are captive audience and have no choice but to pay the price charged, so it was really refreshing that the prices at the bar were reasonable.  Secondly, there were plenty of bar staff on duty, all weekend so you were never waiting long when ordering a drink!

There was then a little area which had been Astro turfed and another barn.  The 2nd barn was the home of the Main Stage and the Horizon stage.  The Astro turf provided a dance area or an area for people to bring their camping chairs & sit & watch the acts.  This was the only area that wasn’t under cover while the music was on.  There were hay bales all round, which provided seating as well as decoration. 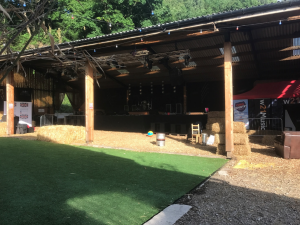 To the side of the barn was an area that I heard called several different names ranging from a village fete to a shopping mall!  In this area there were food stalls, gift stalls, face painting, clothes, cowboy paraphernalia etc.  I was glad to see that the food wasn’t just burgers and pizza!  There was also a coffee van selling muffins & pastries, a curry stall & a chicken stall selling chicken burgers, wraps and my favourite food ever – wings!  It was a good range of food & everything I ate was very nice, the chicken wings were superb, but terribly messy!!  There was also another toilet block in this area (again, not a portaloo to be seen!)

The parade of stalls lead you up to the final area – the Paddock stage.  This was housed in a big blue marque.  All of this meant while the bands were playing you were protected should it start raining (& it did rain – a lot!!)

There is also a beautiful log cabin just by the bar barn, backing onto the river.  This is where Darcy and his father live!!  Walking past the cabin you could often hear a jamming session going on.  I asked Darcy about it at 1 stage as I could hear Darcy’s drummer Ollie, playing.  The living room is all set up, including Ollie’s drum kit, so they can practise whenever they want!

The music started at 7.00pm on Friday.  Gary Quinn came on stage & said that every act playing this weekend was going to sign the guitar he was holding.  This guitar was then going to be raffled off and at the end of the festival someone was going to go home with it!  Kris Barras Band were the 1st to take to the stage.  Friday was nice & easy as there was only music on the 1 stage, so no decisions about who you were going to see & who you were going to miss!.

After Kriss came Outlander, which I managed to miss as I wanted to eat, quite why it hadn’t occurred to me to eat before the music started I don’t know!!  Jenn Bostic with her band was next, followed by Sonia Leigh, who had not only borrowed Katy Hurt’s band, she had also borrowed Katy to sing backing vocals for her as well!  Sonia got a rousing response and actually got quite tearful at the response she received!  Last up for Friday were The Southern Companion.  They performed at Buckle & Boots last year when they were on the Introducing stage.  This year, not only were they on the main stage, they were actually headlining it, their 1st headline spot and well deserved in my opinion!

In between the acts Gary, who was comparing the evening, threw out a yellow balloon/ball into the audience.  The person who caught it came on to the stage, Gary then did a Cilla Blind Date impression of “What’s your name & where are you from”.  They were asked a couple of questions & won a tee shirt.  1 of the people who caught the balloon was our very own Annette Gibbon’s mum Sue!!

After The Southern Companion finished at 12.00 there was a slight gap & then the after party started with a DJ set of Country music tracks.  Jenn Bostic was leading the line dancing and was having an absolute ball!

This finished Friday.  It had been a brilliant day of music.  The festival has a really good feel about it – chilled out and relaxed.  People were milling around soaking up the atmosphere as well as concentrating on the music.  The Main stage was superb as well as you could see it really well, even from the bar area!  Really great set up!