BROTHERS OSBORNE NO.1 MOST ADDED AT COUNTRY RADIO WITH NEW SINGLE “IT AIN’T MY FAULT” 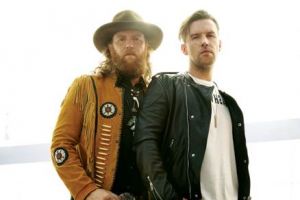 EMI Records Nashville’s Brothers Osborne earns the No.1 most added song at Country radio this week with their new single “It Ain’t My Fault”. The boisterous track received 61 adds marking the highest one-week add total for the duo.

“It Ain’t My Fault” is featured on Brothers Osborne’s critically-acclaimed debut album Pawn Shop which also includes the RIAA Platinum-Certified, GRAMMY-nominated No.1 hit “Stay A Little Longer” as well as the GRAMMY-nominated “21 Summer.” Before its release as an official single, “It Ain’t My Fault” has already received high praise with The St. Louis Dispatch claiming it’s “bound to be big,” Newsday noting it’s “hard-rocking” and The Associated Press adding it’s “as clever as any night-gone-wild tune that country music has offered since the heyday of Alan Jackson and Toby Keith.”

Last fall, John and TJ Osborne embarked on their first-headlining THE DIRT RICH TOUR stopping in over 30 markets such as Toronto, Los Angeles, Dallas and Las Vegas. On the heels of their surprise win for CMA Vocal Duo of the Year, the Maryland natives managed to sell out two nights at the Commodore Ballroom in Vancouver as well as additional shows in New York, Washington DC, Seattle, San Diego and more. Known for their true musicianship and no-limits attitude, Brothers Osborne recently orchestrated an impromptu performance on the roof of their tour bus after part of the venue ceiling collapsed at the Fox Theatre in Hanford, California.

Brothers Osborne will wrap THE DIRT RICH TOUR this week with a sold-out show at Marathon Music Works in Nashville on Jan 18 followed by The Pageant in St. Louis, MO on Jan 19 and Bogart’s in Cincinnati, OH on Jan 20. For a full list of tour dates, news, images and more, visit www.BrothersOsborne.com