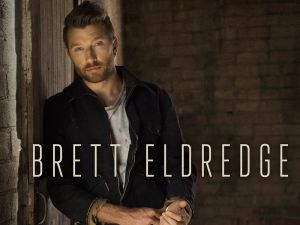 So much highly anticipated new country music has been released recently, and the new self-titled album from Brett Eldredge was generating tons of attention ever since we got a sample of it back in March, with “Somethin’ I’m Good At”.  The new album dropped its delicious dozen tracks August 4th and they were crafted by the cream of the Nashville crop.

I must be candid.  I was looking forward to this album.  It took me a while to jump on the Brett Eldredge fan train, but the “Illinois” album pulled me in like a riptide.  Once I was in, there was little chance of getting out, unless, that is, this new album failed me.  I was cautiously optimistic.

So there I sat, earbuds in, liner notes spread in front of me, like my life depended on it, ready to hit “PLAY”, hoping Eldredge and his brigade of top songwriters and producers pulled out their very best musical weaponry and created something amazing.  I wanted to stay on the fan train in the worst way, but I’m an objective person, I was going in with my mind and ears wide open.

I normally don’t run down every track when writing an album review because honestly, it’s tedious and ends up, well, boring to the reader.  This time, however, I’m changing it up, because no matter how many times I tried to leave a song on “the cutting room floor”, I ended up picking it up, putting it back in, taking another one out, picking that one up, and quite frankly, it was a stupid cycle of nonsense.  They’re all there.  All twelve songs.  I’ll try not to be dull.  I promise.

“Love Someone” (Eldredge, Copperman, Morgan) A mid-tempo number that I would best describe as a good love song for people who don’t feel too comfortable with love songs.  I liked it.  Easy, uncomplicated.

“Superhero” (Eldredge, Copperman, Morgan) I know it’s going to be reviewed this way just about everywhere, but it is what it is.  This is a classic “knight in shining armor” song.  “That girl needs a superhero”, and wouldn’t you know it, the guy singing this song seems to carry a cape in his back pocket.  Ladies love Eldredge.  Why wouldn’t they want their day saved by him?  This song is a winner.

“The Long Way” (Eldredge, Rogers) We hear a lot about “relationship goals” these days.  This song puts one of the goals so many people have, to music – the goal to find someone who truly finds you fascinating.  Someone who really wants to know all about you, and is completely interested in you.  Here a guy visits his lover’s hometown and asks to see everything in it so he can learn what made her who she is now.  I guess it’s a ballad, and as vital as ballads are, sometimes they scare me because they get way too syrupy.  This one makes me think a little bit about my own hometown(s).  Did they shape me at all?  I don’t know.  I have a feeling I’m going to be thinking about that all night now.  This song gets extra points for that.

“The Reason” (Eldredge, Copperman) Simple. Drunk guy sitting in a bar realizes he screwed up and calls the woman in his life.  I’ve been known to make up words when I can’t find the right one, and I’m afraid if you’re reading this, you’re about to experience one of them.  This particular drunk lovelorn guy gives his best “intoxipology” by saying, “The reason I stay so messed up is I need your love so bad”, and although we never find out if it actually works for him, I can tell you this much, the SONG sure works for ME.  This was the one and only song on the album that immediately grabbed me and got me swaying and thinking, “I want to see this live!”  I don’t know if I can adequately gush enough about this track.  It is a slow, bluesy… oh, throw out that tired old line!  Songwriting gold, and I am so very glad that Eldredge recorded this song and put it on his own album.  It’s perfect for his voice and his style.  I’ll just wreck the whole review right here and tell you this is far and away my very favorite track.

“Somethin’ I’m Good At” (Eldredge, Douglas) How many adjectives can I list to describe this song?  Fast, crazy, catchy, zany… the list could go on for days.  Released in March 2017 as the first single off the new album, if you don’t like it, I don’t know if we can be friends.  As far as songs go, it’s all over the map.  It changes tempo, it stops and starts again, it’s a musical party!  If you aren’t convinced by listening to the recorded version, go see it performed live.  I had the good fortune to see Eldredge entertain country music’s biggest fans (and harshest critics) at CMA Fest in June, and not only was this song done to the nines, it helped earn him a spot on my “The Best of Nissan” list when I reviewed the artists that performed on the big stage this year. (That review is available on thinkcountrymusic.com)   This high energy number needs to be at the very top of your party playlist, with a reminder to hit the volume up a few notches.  This one should never, ever be allowed to be background music.

“Haven’t Met You” (Eldredge, Copperman, Morgan) The longest track on the album at 4:20 about a hopeful guy who is always imagining his dream girl could be anywhere at any time.  He just hasn’t met her yet.   A “glass full” story about keeping your eye on the prize.  The concept is simple, and one so many can likely relate to.

“No Stopping You” (Eldredge, Douglas) People love to say that Brett Eldredge is the romantic answer to today’s country music.  That might be true, but let’s not confuse “romantic” with “schmaltzy”.  I don’t consider Eldredge “schmaltzy”, and here we have one of the more “romantic” songs on the album.  This one finds another thoughtful male (let’s assume it’s Eldredge) thinking about the lady he let go.  He’s wondering if she ever thinks about him.  Does anything ever remind her of him, as things do for him?  “Hope you hear me in the lonely miles.”  It’s a sad song, but a brave one.  Let’s think of it that way, shall we?  He didn’t lose her, he released her.  Romantic, not schmaltzy.  There.  Fixed the one track that had me slightly troubled, and when I say “slightly”, I mean, very, very slightly.

“Brother” (Eldredge, Douglas) My early prediction is this is going to become an anthem for brothers all over the world.  The theme is pretty universal.  Playing ball, riding bikes, cars, fights, bars, girls.  Things brothers experience as they grow up.  In the end, having each other’s back.  The sad fact is, not all brothers will relate.  Some don’t get along this well, some don’t even speak as adults, but a good majority are best friends for life, and these are the ones that will see their own brother’s face flash through their mind every time they hear this song.  It’s beautiful, in a masculine way.

“Heartbreaker” (Eldredge, Copperman, Morgan) “You’re the best heartbreaker I know”.  Now there’s a compliment you don’t hear every day.  This is an oddly upbeat number that tells the tale of a confused guy who just can’t stop returning to the scene of the crime.  That being his on and off girlfriend who loves to break his heart.  It seems to be a game for him, as if he’s trying to break the code.  Maybe one of these times he’ll figure her out and their love will last, but for now, he’s settling for being on the losing end of the relationship.  The tune is quickly infectious and let’s face it, we all know someone that’s been involved in one of these cat and mouse relationships.  Maybe it’s you.  At least some very brilliant writers found a way to pen a kind of cheerful song about this most complex of love affairs.  Eldredge’s vocals help deliver the message flawlessly.

“Crystal Clear” (Eldredge, Morgan, Reynolds) It’s been a trend in country music for the past few years to put out a tropical, beachy song (Zac Brown Band, “Castaway”, Eli Young Band, “Saltwater Gospel”, Chuck Wicks, “Salt Life”), and I guess it was Eldredge’s turn.  This one is just that. Tropical and beachy.  Great for summer pool parties.

“Cycles” (Eldredge, Rogers) Maybe my second favorite track on the album. Eldredge’s vocals sound very convincing as he sings about one of those love connections that mystifies all of us.  The kind where two people repeatedly find themselves together, going through the same “cycles” over and over again, ultimately going their own separate ways, knowing full well the whole process will repeat again eventually.  Do these two people belong together?  Everyone around them seems to believe they don’t, and even they often believe they don’t, but something keeps pulling them together. Only the universe knows for sure it seems.  “Cycles” is one of those songs that disguises itself as rather simple, but given the time and energy it deserves, is much deeper.  Musically and lyrically, I adore this one.

“Castaway” (Eldredge, Reynolds) Right away, let’s be clear, this is definitely not a tropical song. Not even close.  Nobody is marooned on an island.  There are no “castaways”, there were no three-hour cruises or volleyballs with names.  This is another song of a much heavier variety.  In fact, I listened a few times so I could be sure I was understanding it.  This is a confession.  A man admitting he would be a lost soul without the woman in his life.  I don’t even want to go into it too much because some songs should be left alone for the listener to interpret.  I feel like I’ve already given it all away as it is, but perhaps not.  You need to listen.  I promise it’s worth it.

Twelve songs.  The very brightest songwriters and producers in the business.  Eldredge co-wrote every song on this album.  This project was not taken lightly and the end product shows it.  It’s brilliant.  It’s much better than I expected.  I can happily say I will remain on the Brett Eldredge fan train and I’m looking forward to whatever he has planned next.  Until then, I’ll be listening to this album on repeat for a while.  Especially “The Reason”.  Did I mention I love “The Reason”?