Big Day In A Small Town 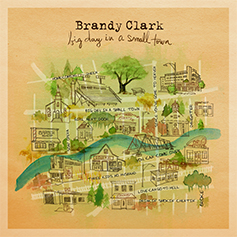 As a country music fan ( which i assume you are if you are reading this! ) you will have had to be living under a rock if you are not familiar with Grammy nominated, CMA winner Brandy Clark, either as a songwriter ( for artists such as Miranda Lambert, The Band Perry and Kacey Musgraves ) or through hearing her 2013 debut album ” 12 Stories” which was self-funded and released on the independent Slate Creek label.

It certainly put her on the map as a recording artist in her own right , and at last we have her hugely anticipated follow-up album ” Big Day In A Small Town”, which she has always said was never intended to be another 12 Stories. With producer Jay Joyce on board and major label backing these days ( Warner Bros) the sound is not unexpectedly far bigger this time round, ” edgier” as Brandy herself has described it, and with the first single ” Girl Next Door” released ahead of the album itself I have heard a few rumblings of Brandy ” selling out” to radio friendly country-pop.

But no doubt there would be those who would criticise her for being stuck in a musical rut had this offering over – replicated to her first album. Some people are never happy!

Production differences aside, Brandy remains the same unique storyteller on these eleven tracks, as usual frequently getting inspiration from people who have crossed her path ( often in her VERY small hometown of Morton, WA) and conversations with friends ( “All these songs, there’s some truth in them, somewhere, that resonates with me or that is about me” she said in one interview). The characters she writes about are once again often downtrodden and struggling against the odds for whatever reason but as always she is never judgemental, preferring to simply tell it as it is. As Brandy told Rolling Stone Country recently ” my goal is for other people to find themselves in my songs” and indeed many of us can relate to them in some way whether we live in a small town or big city. Her writing is honest, witty and often heart breaking, and once again she has co-written with some of Nashvilles finest, including Shane McAnally, Luke Laird and Jessie Jo Dillon.

The album starts with an acapella choir ( yes, even the backing vocals are bigger on many of the tracks!) introducing the fun, light hearted, mid-tempo ” Soap Opera” a song which sets the stage for the tales that are about to unfold, almost like an overture to a musical does. It even cleverly incorporates the title of one of the biggest soap operas in the U.S, ” The Young And The Restless” , in the chorus. Everyone has some drama going on in their life, we’d all be wanting an Emmy if they were being handed out, with the hairdresser and the bartender in this song being captive audiences for their customers and their troubles. The track blends seamlessly into the afore mentioned “Girl Next Door”, sung with a touch of frustration and a shed load of attitude but which still remains another fun track with a very catchy chorus and guitar riff. For me it’s part of the middle eight lyrics, ” the thing that turns you on is what you want to change” , that sum up the message in this one, falling for someone who is a self confessed ” perfect mess” and then wanting to turn them into a Marcia Brady style homemaker.

Talking of vocal attitude ( tinged with a fair bit of bitterness ) give “Love Can Go To Hell” a listen…..a break up song with a difference as the blame is put not on the ex ( who she obviously isn’t over yet…” every day’s just another night by myself”……) but on love itself. ” I don’t blame you at all, I don’t hate you at all, it’s all love’s fault” .Very clever writing throughout on this one by Clark and Scott Stepakoff ( someone who’s album ” Unlived Lives” , which features Brandy on the title track, I highly recommend ) . Apparently a song that was contender for lead single and I think deserves to be out there at some point.

If it’s sheer fun you are after in a song, then either ” Broke” or ” Daughter ” are the ones for you. The former, ( no prizes for guessing its subject matter!) with its heavy electric guitar presence isn’t really my thing and I am not sold on the male dominated backing vocals and cheering, but there’s no doubt that lyrically it puts a smile on my face in places, the idea of having to drink ” generic coke” and ” secretly wishing that grandma would croak” for example, and it is growing on me. However, I really love ” Daughter” which reveals Brandy’s dark humour better than any other song she has written in my opinion. A revenge song with a difference, she isn’t about to punish her cheating ex by cutting the break line on his four wheel drive or even bad-mouthing him ” Cos that ain’t Christian” but hopes he’ll get his comeuppance by having a daughter who is “Daddy’s little girl, just as sweet as she is hot” who dates guys just like him so he knows exactly what they have in mind when they come to pick her up. Yes, karma hopefully really is a bitch, Brandy!! Oh, and a certain Kacey Musgraves contributes to the backing vocals on this one.

The album’s title track starts with the tale of a school girl’s waters breaking in geometry class when her mother didn’t even realise she was ” nine months late” but I must admit to finding the relentlessness beat and repetitive riff on ” Big Day In A Small Town” rather annoying and as on ” Broke” am not a fan of the backing vocals. I still really like it as a song though, it contains some fun lines explaining how minor occurrences such as someone shooting a deer or going to the supermarket wearing a nightgown make for news and gossip in a small community.

There is just one solo write by Brandy on the album, and i really do love the traditional country, honky tonk sound on ” Drinkin’, Smokin’ Cheating”. This really is a cleverly crafted song, light hearted enough throughout the first verses in which she describes how she would seemingly enjoy partaking in each of these vices in turn ( which i assume her partner has) …….but at the end she admits that she won’t be going down any of those paths as that would result in losing her partner who, unlike her, wouldn’t tolerate such behaviour. Sort of sad in the end, at the very least philosophical!

As much as I enjoy dancing around my living room to these more upbeat songs and singing along to their catchy choruses (both of which I hope to get the opportunity to do at a Brandy Clark concert at some point!) I generally tend to prefer the slower, more poignant numbers when really listening intently to this album ( as was the case with 12 Stories) . One of my favourites has to be ” Homecoming Queen” ( which, incidentally, was covered by Sheryl Crow on her last album), the opening lines grabbing me from the start on first listen and I really wanted to discover more about this twenty-eight year old for whom the “last ten years sure took their toll”. Dashed teenage dreams, the reality of life as a wife and mother in the same town you hoped to escape from ….it’s all there……” she loves her husband cos she said she would” …..” she swore she wouldn’t get stuck in this town, now she’s cutting coupons two doors down from her mom” . A real contender for a single release I reckon, hope you like it as much as me

The theme of life not always turning out as planned recurs in the Lori McKenna co-write ” Three Kids, No Husband ” ( which Lori also recorded so beautifully on her album ” Numbered Doors”) but this time seen from the perspective of a hard working single mother, waiting for the child support that never materialises and working as a waitress to help make ends meet . ” It’s been a forty hour week, and it’s only Tuesday”. The descriptions and observations in this fabulous song ( hope these ladies write more together!) make me think of a fly on the wall documentary, the lyrics really transport me to that home/diner and make me appreciate the hard work of the ” real life hero” as Brandy describes her…….” ‘cos those kids ain’t gonna raise themselves” .

Having heard a fabulous live acoustic version of ” You Can Come Over ” which sounded so perfect with Brandy’s heartfelt vocals and a simple piano accompaniment ( by Miles Aubrey, also a fantastic guitar player, he has been on tour with Brandy recently) I was really worried how this one would translate in the studio and I must admit to finding the drum beat a bit overpowering in places but also loving the steel and the vocal harmonies. This song just gets to me and I am sure a lot of you can relate to the subject matter, wanting to keep an ex as a friend but having to resist the temptation to ” go where we’ve gone too many times before” . Here’s that rendition I love so much, recorded in LA recently ( listen out for the clever word play at the very end)

Anyone familiar with Brandy’s song ” I Cried” ( a bonus track on 12 Stories and her contribution to the excellent ” Southern Family” compilation album) will appreciate how she can reduce you to tears in this tribute to her Grandfather, and she does it again with this album’s closer, ” Since You’ve Gone To Heaven” .Inspired by the untimely death of Brandy’s father several years ago in a tragic work related accident it describes not only a family’s struggle to cope after suddenly losing its strong figurehead but also how the entire town has seemingly fallen apart in the intervening years. In fact, ” the whole world’s gone to hell” and her father must be turning in his grave at what has happened. I love the instrumentation here, especially the sweeping strings. Considering that she admits to finding it hard to write about thing that are right in the centre of her heart according to one interview i have read, Brandy has done a damn good job in both of these poignant, personal writes.

In summary, whatever you think about the production on this album ( there will be ongoing discussions on this topic I am sure!) there is no doubt about the continuing quality of the songwriting, and I feel that vocally Brandy sounds stronger and more confident as an artist. Once again she has given us a collection of fantastic tracks which have me laughing one minute, in tears the next, and every emotion in between. They contain all of the elements I so loved about 12 Stories, but this time around sights are seemingly set on modern country radio and I really hope this brings her the bigger exposure her music deserves and wins her many more fans. Oh, and of course that we will see her here in the UK for a headline tour very soon. I for one will ” Pray to Jesus” for that announcement!