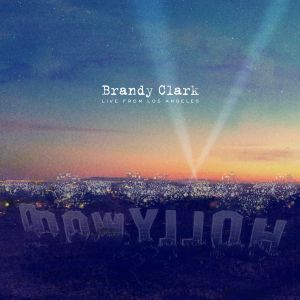 Originally a limited edition vinyl release for this year’s Record Store Day in April, I am so happy that this recording has recently been made available to download ( sadly not on CD though ) and is now accessible to the wider audience that it deserves.

Those of you reading this who have ever seen Brandy play live will appreciate not only what a great performer she but also the rapport she has with her audience, especially at intimate shows like the one captured here. Recorded at the 200 capacity Hotel Cafe in Los Angeles last

September, Brandy is accompanied solely by her trusty wing man, lead guitarist/keyboard player/backing vocalist Miles Aubrey, and it is great to hear her songs in totally stripped back form which helps highlight their lyrics and Brandy’s ( in my opinion) often underestimated vocals. With witty and informative comments in between songs, listening to this album really is like having this duo in your living room.  Of course the crowd’s very enthusiastic reactions are also captured for prosperity!

The album’s eleven tracks  ( all cowritten by Brandy, apart from one solo write ) are a mix of songs from her two studio albums, 2013’s 12 Stories and last year’s Big Day In A Small Town, and there’s also one previously unreleased number. Brandy sets the tone of the night after the opening number, “ Drinkin’, Smoking’, Cheatin’ “ by saying that “ all the favourite sins ” would be represented and inviting the audience to sing along whenever they felt like doing so.  “ Let’s turn the Hotel Cafe into a rowdy redneck town” she says a bit later on after realising they seem to know all the lyrics of even her newer album despite it being released only three months previously.

Thankfully though the audience are respectfully quiet and attentive during the familiar ballads on the album, “ Hold My Hand” ( “ the best two and a half minutes of my life thus far were playing this with Dwight Yokam at the Grammy’s” Brandy says) and “ Since You’ve Gone To Heaven” , such a heartbreaker based as I’m sure many of you know on the untimely death of Brandy’s father in a logging accident.
But there are plenty of fun, uptempo songs too for the crowd to join in with, the ever popular “ Stripes” and “ Get High” included, and I’m so happy that the setlist included one of my favourites from her second album “ Daughter”. As Brandy says before performing this one, she’s written a lot of revenge songs over the years but this is her favourite as it’s about a “ sweeter , longer lasting type of revenge”, not “ blowing shit up or slashing tyres or anything like that “. She explains, too, how the first time it was ever played live was at a previous show this very venue, and it was the crowd’s reaction to it on that occasion that made her add it to her full band set.
Of the favourite sins Brandy spoke of at the start of the evening, drinking in particular features on many of the songs she’s written, and the “ not necessarily a new song, but it’s one that’ll be new to y’all” ” track on this album is no exception. Co-written with two of Nashville’s finest, Josh Osborne and Scott Stepakoff, it’s a beautiful ballad, with Brandy singing from the heart about being “ ok all day long” about her breakup but how it’s a totally different thing at night, when she tends to get “ sad when the sun gets to sinkin’ “,  and “ drunk when I get to drinkin’ “.  She tells the audience how she’s intending at some point to make an entire album of drinking songs…..now how amazing would that be! Anyway, here’s “ When I Get To Drinkin’” captured on video from this very concert by massive Brandy fan Tzlil Leigh Lindsay (  aka Dylan )
The album finishes off with “ Pray to Jesus”, as Brandy puts it  “ I’ll  never leaves you on a sad note” and announcing she’d be signing merch after the show, yes this really is a great recording of one of her shows!While live albums, in my opinion, tend to be for those who are already fans of the artist concerned, I think this one also serves as a great introduction to Brandy’s music for anyone wanting to check out her artistry.

If this has whetted your appetite to actually catch a Brandy concert there’s a full list of her upcoming shows ( including her extensive UK tour starting late this month ) at brandyclarkmusic.comTrack Listing