Looking at Brandy’s hectic US tour schedule a few months back I was convinced she wouldn’t make it over to the UK this year, so bit the bullet and booked flight and tickets for this show, chosen as it was the nearest to her home town of Morton, Washington ( just over 100 miles apart) so knew it would be extra special for her and would also give me a chance to meet social media contacts who had said they would be there too. And then guess what….two weeks later her short UK tour was announced for September! But after seeing her at two of those four shows I was even more excited ( if that’s possible!) to be heading stateside to see her there on this acoustic tour.

An added bonus was securing tickets for a very intimate show the afternoon before at the local radio station’s skype studio ( yes, this was shown live) ….thanks The Bull 98.7! The audience of 60 or so were treated to four songs from Brandy’s new album ” Big Day In A Small Town” including of course the current single ” Love Can Go To Hell” which has happily been added to the playlist of many radio stations across the USA, plus an entertaining and informative interview followed by a brief meet and greet/official photograph session. Oh, forgot to mention….the first thing she said after taking to the stage and greeting us was that ” there’s someone here all the way from the UK” ….wonder who that was? Accompanied on both guitar and piano by the wonderful Miles Aubrey it was a great pre-cursor to the next evening’s show.

So, to the “main event” , the venue for which was a 300 capacity 1912 building in the NW of the city, a former mission hall on two levels with a mixture of more formal rows of seats, cocktail style tables/chairs and standing room, with a small bar, snack food available and of course a merch table where among the regular items there was a small supply of posters specific to the concert on sale. I got talking to a several people, it seemed everyone there knew Brandy personally somehow or other, either as friends or family members ……. her cousin Kelly told me how he held her when she was just a few days old and as a child watched her learning to play guitar (” she was real dedicated even back then”) , her babysitter reminisced about Brandy looking up at her with huge brown eyes saying ” mom says we’ve gotta be careful of the wood stove” and a friend from a rival school told of playing basket ball against her. There really was a party atmosphere with people who hadn’t seen each other in years hugging and catching up with their news. There was so much love for Brandy in the room, everyone so pleased for what she has achieved so far in her career. 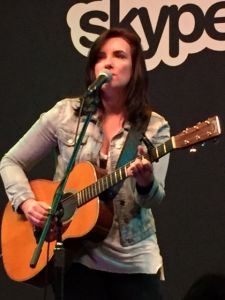 A short set by local band ” The Stubborn Lovers” was well received but of course everyone was there to see their “Homecoming Queen” and a massive cheer greeted Brandy as she and Miles took to the stage and launched straight into ” Drinkin’, Smokin’ ,Cheatin’ ” swiftly followed by ” Stripes”. The venue’s high ceiling made for great acoustics, her strong voice thankfully unaffected by the very busy tour schedule of the past few months. After thanking everyone for coming out and saying how excited she was to have had a Portland show added to this acoustic tour she mentioned how her new album ” Big Day in a Small Town” had been released a few months back and that her own small town was of course Moreton ……well, the crowd erupted at that comment, which naturally led to the album’s title track being next on the setlist.

Unlike at the UK concerts I’d attended where the entire audience was super attentive ( something US country artists often comment about) and singing along word perfect throughout, there was much more of a casual atmosphere here…not to say the the music wasn’t important to everyone there but it was also, as i have mentioned, treated as social get together by many and i was glad I was sitting at the front and therefore not too distracted ( or annoyed! ) by the constant chatter from those mingling at the back of the room and hanging out at the bar.

As expected a lot of the set was songs taken from both Brandy’s albums ( she mentioned how the release of ” 12 Stories ” changed the course of her career, as prior to that she was writing for other artists, ” Moma’s Broken Heart” was also performed ) but we also got to hear an as yet unreleased song Brandy has written, ” When I Get To Drinking” which she had also played in the UK and she mentioned her plan to at some point release an album of drinking-related songs, and ” ode to alcoholism” ( at this point she acknowledged those at the bar!)

Her love of the classic country music she grew up with and which continues to inspire her (” thanks to my mom and grandma for that, grandma lived next door and always said there was only two types of music, country and western!” ) was naturally also represented. A wonderful version of Buck Owens 1964 song ” Together Again” included a particularly brilliant guitar solo from Miles which didn’t go unnoticed by the audience ( Brandy had introduced him during their opening number and acknowledged him several times throughout the evening, saying not many people are as easy to work with ) and I was so thrilled that we got to hear her sing ” Blue Bayou”, the song she had played at the request of Fred Foster the previous weekend in Nashville at the Country Music Hall of Fame’s annual Medallion Ceremony. He was being inducted in the non-performer category ( amongst his many accolades are producing and co-writing for Dolly Parton, Kris Kristofferson and Roy Orbison), it is a tremendous honour to be asked to perform at this event and Brandy explained how, that evening, her performance was sandwiched in between those of Dolly and Kris…..no pressure!! She admitted to us that it’s a song that’s a bitch to perform, but of course her version was wonderful and it was made even more poignant as she told us how it is one of her mother’s all time favourites…….and she was there in Portland that night to hear her daughter’s rendition.

At one point in the evening Brandy had said she never knows who she is going to meet when out on the road, John Mcenroe walked into her dressing room one evening and on another occasion in LA the real Marcia Brady ( who is mentioned in her song ” Girl Next Door”), the actress Maureen Mccormick came backstage to meet her. At the very end of the evening, she referred back to this so beautifully ……. ” It really doesn’t matter who walks into your dressing room and tells you you are great, you want the people you grew up with to feel that way” she said …………and there was no doubt in my mind that every single person at this concert was bursting with pride, ” their ” Brandy has certainly put Moreton, Washington on the map and I felt truly privileged to have been part of such a special event.

You can imagine how long post-show the meet and greet took, Brandy having time for everyone, posing for photos, chatting and signing merch ( luckily the venue didn’t have a curfew!). It never ceases to amaze me that she remembers my name whenever we meet ( she possibly thinks of me as her UK stalker!!), down-to earth is a much over used phrase when describing artists these days i feel, but it truly does apply here. We talked for quite some time and I have one of the concert posters and the set list ( which I quickly grabbed from the stage!) ready for framing as momentos of my trip, along with many memories in my heart I will treasure for ever. 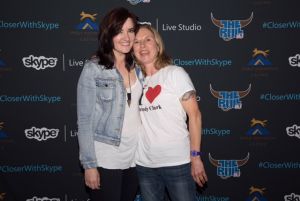 There are very few artists I’d fly half way around the world to see, would i do it again for Brandy Clark? In a heartbeat ( or maybe that should be ” in a broken heartbeat minute”!) . But I have a feeling from chatting to her after the show that it won’t be long before she returns to see her UK fans, she really is appreciative and truly surprised at the support she is receiving this side of the pond, Think Country will of course keep you updated so watch this space! 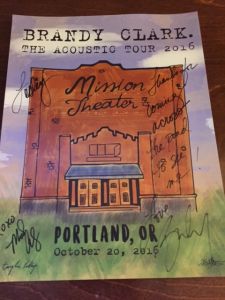 Drinkin’, Smokin’, Cheatin’
Three Kids, No Husband
Stripes
Mama’s Broken Heart
Big Day In A Small Town
Together Again
Hold My Hand
Get High
Daughter
When I Get To Drinking
You Can Come Over
Hungover
Love Can Go To Hell
Blue Bayou
Girl Next Door
Pray To Jesus