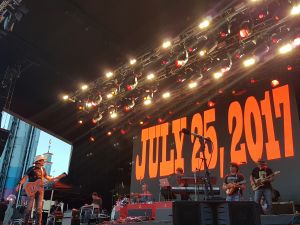 Gröna Lund is a theme park in Stockholm, Sweden and served as one of Brad’s European stops on his Weekend Warrior World Tour. You can be forgiven for not having heard of it, I certainly hadn’t when a few days after C2C 2017, I was pouring over his tour dates online trying to figure out when I could see him next. A quick email conversation with the theme park itself confirmed that no, you don’t need a ticket for the gig, just park admission, which get this, was THIRTEEN POUNDS if you entered before 6pm. THIRTEEN POUNDS TO SEE BRAD PAISLEY. Yes please, sold!

And so it is that in July, some months later, I found myself up against the barrier at the side of the stage still pondering the random but pretty cool venue. Around 6pm the area in front of the stage started really filling up and at 7:15pm Chase Bryant took to the stage. Brad’s Weekend Warrior Tour dates in the US had Chase Bryant, Lindsey Ell and Dustin Lynch as support and he chose to bring Chase over for the European dates. 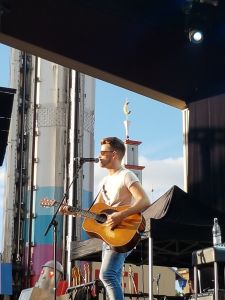 Those of you who attended C2C this year will remember Chase Bryant from the Yamaha stage in the Arena, the Under the Apple Tree stage and Brad Paisley bringing him on stage during his Friday set. I was looking forward to seeing Chase in a different setting, with a crowd size somewhere in the middle. He opened with ‘Hell If I Know’ and it was hard to tell if people were enjoying it as they were rather quiet except the ten times he mentioned Sweden or Swedish girls! He launched into ‘Little Bit of You’ next, which I love and was happy to hear it live again. It transpired that there were at least a few people who knew who he was as they started yelling song requests.

“Change My Name? No I’ve had this name a few years now…oh you mean the song!”

Clearly the months of touring with Brad have rubbed off on his sense of humour… He went on to say that people told him he wouldn’t amount to anything when he was younger and now he is playing a gig in Stockholm and thanked everyone before launching into ‘Come Pick Me Up Tonight’ co-written by Chase and released by Brett Kissel. I think the crowd had started warming to him at this point and he decided to follow this with a Tom Petty cover as “it’s the only way I’m going to get you to sing with me” before playing Freefallin’. Halfway through he tried to get everyone to sing along (which wasn’t as loud as some of the singing I’ve heard at London gigs!) but he did get a good response, until everyone sang a bit too fast for him: “Wait, why have you sped up? You need to get in the groove. The ladies are fine, men – ladies don’t like it if you go too fast”. Chase Bryant, ladies and gentlemen! He finished his set with ‘Take It On Back’ introducing the song as “you know that point in time where everything is amazing and you want to go back to it. like now, this gig here in Stockholm, well this song is about that.” I enjoyed his thirty minute set and think he worked the crowd well, I would have liked a slightly longer set with some new stuff but we can’t have it all. 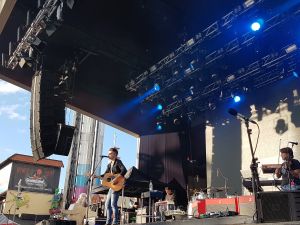 Soon enough it was time for the man himself, Brad Paisley to take to the stage. He opened with ‘Last Time for Everything’, from his new ‘Love and War’ album with a bit of Purple Rain in the middle after the lyrics “hearing Prince sing Purple Rain”, which was great to hear. After he finished singing, he exclaimed that it was great to be back in Stockholm, one of his favourite cities and in such a great venue where people were on rollercoasters whilst he was performing. 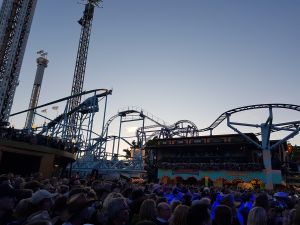 Then he told people standing watching him on one of the platforms to watch out for vomit from the rollercoaster before launching into ‘Old Alabama’, followed by ‘Perfect Storm’ and ‘Online’ where he’s started changing the lyrics from “go check out MySpace” to, “go check out my Facebook page” – doesn’t have quite the same ring to it, does it? One thing I do love about Brad Paisley gigs is that he plays the videos for the songs he’s singing on the screen behind him – the fail video for Crushin’ It had my girlfriend in stitches, I’m not sure she even listened to the song itself! 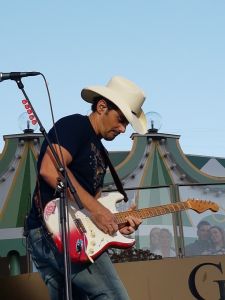 He then played the opening lines of ‘This Is Country Music’ before taking his acoustic guitar off, signing it and giving it to a little girl in the front of the crowd. He does this at his gigs to encourage young musicians and it’s really lovely of him. Of course, then it transpired that the little girl was actually from Pennsylvania “I’m so sorry, I really thought I was giving it to someone Swedish!” I’m not sure if the girl in question actually lives in Sweden or not, but still such a wonderful gesture and his conversation with her ended with asking if he can be her support act one day. Then he got a different guitar and finished the rest of ‘This Is Country Music’. Next up was ‘American Saturday Night’ and Chase Bryant came back and joined Brad on stage for this one.

Brad: “How does your hair stay the same? It hasn’t moved!”

Brad: “You sure it’s not that Something About Mary stuff?!” 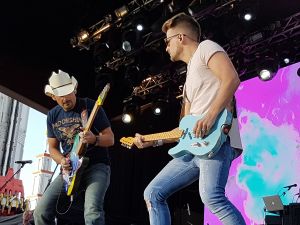 Pair of jokers! I love ‘American Saturday Night’ and I don’t think I’ll ever tire of hearing it live. Brad changed the lyrics to “My great great great granddaddy stepped off of that ship, I bet he never ever dreamed I’d ever play any place like this!” and spread his arms out wide. He followed this with ‘Ticks’ and told Chase to stay since “you know this one”. You can tell they have been on tour together for a while as they worked really well together and sounded great. When the song finished Brad asked everyone to give Chase a cheer “but not too loud, just a quiet one”

Next on the setlist was ‘I’m Still A Guy’. His setlist for this show was a mix of the old and new but I would have liked a few more songs from his ‘Love and War’ album whereas he seemed to have given his older material preference – not sure if this was the case for his American dates too or just a European decision. It would have been good to hear ‘selfie#theinternetisforever’ live again but either way, I love all Brad Paisley stuff so it was fine by me. Next he played ‘Celebrity’ followed by ‘I Thought I Loved You Then’ and ‘She’s Everything’. You can tell Brad is a seasoned performer, he is perfectly happy to start a song on one guitar, continue singing and change guitars after the first couple of lines without any break in the song. He knows exactly how to work an audience and I couldn’t believe it when I checked my watch and realised we were already halfway through his set, it had gone so fast! He has just the right amount of both slow and fast songs in his set to stop the audience getting bored and I was loving it. Next up was ‘She’s Everything’, a slow one, followed by ‘River Bank’ to get everyone dancing again (or maybe just me!) with a bit of ‘Honky Tonk Women’ thrown in somewhere in the middle for good measure. Next a familiar plinking and as the opening bars filled the speaker I nearly screamed out loud – FINALLY I was going to get to hear Grey Goose Chase live and it didn’t disappoint! This is the song Brad co-wrote with Timbaland that appears on the ‘Love and War’ album. A perfect upbeat anthem about drinking all your worries away after a break-up, it’s one of my favourite songs on his new record with a hilarious video to go with it, that as you guessed it, was playing on the screen behind for the duration of the song.

Next he slowed it down again with ‘We Danced’ but he only got through the first verse before stopping, “these girls in front have been requesting a song all night but it’s from one of my first records and I don’t even know if I remember it!” A group of girls front and centre had brought along a notepad and were writing notes to Brad in big black pen requesting ‘Cloud of Dust’ from his ‘Who Needs Pictures’ album so he tried to play it. The best and most hilarious thing was, he most definitely did not remember the lyrics but the girls had also kindly written out the lyrics on their pad for him! So he treated everyone to the chorus before asking if anyone else had any obscure requests. I couldn’t quite hear the shouts but someone must have requested ‘Welcome To The Future’ as he also treated everyone to the first chorus of that too. Then his band disappeared for what he said was the acoustic bit. He then told everyone that he had had the same band for years, he can’t bring himself to fire any of them. The newest has probably been part of the band for 20 years. And it shows – his band were absolutely amazing. He sang ‘Southern Comfort Zone’ with the stage to himself before his band came back to join him for ‘Water’. His next introduction started with “I think I know a bit about women, not everything and maybe not Swedish women but I know enough about American women to know what they want. And they like men to make decisions, right?” No Brad, that is not right at all but I think I know where this is going… “Yeah they like men to make a decision and stick to it.” And then he launched into ‘I’m Gonna Miss Her’ from his ‘Part II’ album about having to chose between a woman and fishing…and choosing fishing(!), followed by ‘Mud On The Tires’. His final song was ‘Today’, which he sang with the date emblazoned across the screen behind him. For his encore he sang Mona Lisa (one of my favourite Brad Paisley songs) and Alcohol. I did feel a bit weird not having any alcohol in my hand for that one! 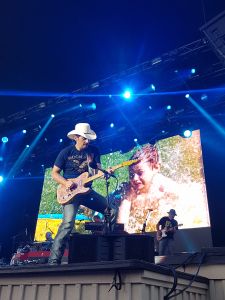 Brad Paisley put on an amazing show and the sun setting in Gröna Lund provided a wonderful setting for the gig. Having seen him play in Vegas, London and Stockholm, he never fails to disappoint and I’m so glad I got to attend this stop on his Weekend Warrior Tour.

Last Time for Everything, Old Alabama, Perfect Storm, Online, Crushin’ It, This is Country Music, American Saturday Night, Ticks, I’m Still A Guy, Celebrity, I Thought I Loved You Then, She’s Everything, River Bank, Grey Goose Chase, We Danced/Cloud of Dust/Welcome to the Future, Southern Comfort Zone, Water, I’m Gonna Miss Her, Mud On The Tires, Today.

Head over to Nicole’s blog to find out more about her travel escapades http://www.lostinthiswholeworld.com