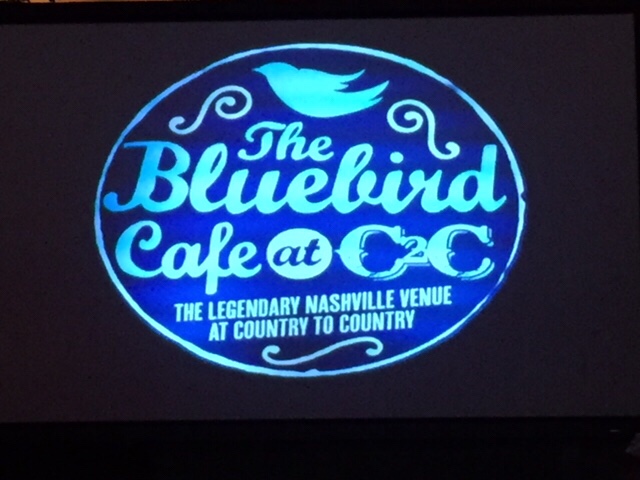 I’m a huge fan of songwriter’s rounds, and what better place to witness one of these events where singer/songwriters take it in turn to perform and relate the story behind their songs than Nashville’s iconic Bluebird Cafe where so many of the country music songwriters we know and love started off? A close second is when the Bluebird comes over to London’s C2C Festival, as it did for the third year running last weekend, with the cafe’s Erika Nicholls once again taking to the stage to introduce this year’s performers, Leslie Satcher, Ashley McBryde and Walker Hayes, each with their own very individual styles of writing. Moved to the larger Building Six this year due to it’s popularity, there was definitely none of the Nashville venue’s intimacy in this aircraft hanger of a venue but none the less the 75 minute show was hugely enjoyable and at times hilarious! It was also being filmed for a documentary about the cafe’s 35 year history, something to look forward to and which Erika told us she hopes will be launched at next year’s Sundance Film Festival.

There were four “ rounds”, each starting off with Leslie who has co-written for many of the greats including Patty Loveless and George Strait since moving to music city in 1969 and who has also released two albums in her own right. Vocally her strong, bluesy renditions were incredible, as was her impressive guitar playing, she sure delivered with attitude! Being a big Terri Clark fan I love her opener, “ Gypsy Boots” that Terri co-wrote and recorded in 2009, inspired by Leslie’s upbringing in Colorado where she was raised by her single mother. It was the ’70’s, and they’d go to the river to cool off in the summer…..and on one auspicious occasion a beer lorry had overturned upstream and it’s contents came floating by! Naturally this was a gift to her financially struggling mother, who proceeded to take her jeans off and wade into the water! Leslie says she was yelling at her not to either take off her pants or drink beer…..trying to keep her true to her Baptist upbringing!

Her rounds included one more song she’s had cut by another artist, George Strait’s “ Troubadour” ( a song written to quash rumours at the time that he was about to retire) plus two from her own recent album, “ 2 Days In Muscle Shoals” ( where it was recorded ) “ Run It Down South “ and her latest single “ This Won’t Take Long “ which features Vince Gill and Sheryl Crow on the record. Apparently she’d originally gone down to Alabama just intending to record four demos, but ended up with ten (“ hey that’s an album! she told us!) but they were always meant to be songs for herself as opposed to ones to pitch to other artists. Unlike Ashley and Walker, this was sadly Leslie’s only C2C appearance, I’d have loved to hear more of her and in a more intimate setting. She was dashing off afterwards too but just about found time to go down the queue signing everyone’s beautiful posters that we were given as we went in.

Walker was the second to perform in each of the rounds, and I must admit to not being in the least familiar with any of his music! His style and vocals were also the one that appealed to me the least it turned out, although his songs were totally infectious and he came across as such a lovely, humble person! He was extremely quick witted, and this definitely manifested itself in the second song her performed, “ Dollar Store” , which he introduced by saying that all the songs on his album “ Boom” are personal ones and with four birthdays in his family in August ( by the way he is father to six-soon-to-be-seven children, how is that even possible looking at how young he still seems himself!) shopping at one of these bargain places is a very good idea! He had started off with another album track “ Halloween” , his attempt he told us to write a love song that his wife of thirteen years would care about……as “life isn’t all love songs and fairy tales!”. Ashley helped him out vocally on this one, having learned it just before they came on stage! Like Ashley, Walker’s success has been a long time coming, he told us how he lost a record deal six years ago and a lot of people gave up on him, but a chance meeting with Shane McAnally ( who’s name brought a huge cheer from the audience, with Walker quipping “ I should have mentioned him earlier!” ) in a Smoothie King one morning encouraged him to persevere. Walker sent Shane songs regularly, and said he always listened and responded, which kept him going. Then one Saturday “ I remember it well” Walker said, Shane told him that the reason artists kept rejecting his songs is that they were ” too stylistically you “…..and it was when he recorded one himself, “ You Broke Up With Me” which went top 10 that his fortunes turned around and he told us that song is the reason he’s here today and proof how drastically one song can change your life. But the story behind “ Layla’s Stars” which he recorded stripped down on an eight track ( something he does on a regular basis) really got me welling up…..three years ago, when he was really strapped for cash, his car roof needed repairing so he had to do it himself using among other things his daughter’s coloured thumb tacks. She saw them as stars….that was the way she looked at the world…and when he was sitting in the parking lot at Costco where he worked, wondering if he should get a “ real job” her optimism stopped him from quitting chasing his dreams.

Yes, Walker definitely won me over in many ways at this session!

Ashley on the other hand had won me over long ago with her incredible songwriting, which as is the case with many of my favourite artists can have me laughing one minute, crying the next. And I’d already seen her perform this weekend, confirming that she is an all round amazing artist. What surprised me was when she told said how nervous she was, ….” I don’t get nervous very often but whenever I do it’s at the Bluebird “ she said at the start of her first round, then later on “ I’m not used to wearing fake lashes, I sweat when I’m nervous and I’m nervous right now so let me know if they get stuck!”, Walker’s immediate response being “ I hate it when that happens!” . With her debut major record label album out later this month it was no surprise that three of her four rounds featured songs from it, but I was so happy that she kicked thing off with the moving tribute to her father, “ Bible And A .44” from her previous EP, the song she performed with Eric Church when he invited her to join him on stage for her first ever arena performance.

She told us that she’d been banned from even touching her father’s guitar but when he turned 70 and was out celebrating she got it out of his closet and wrote this song on it. He had been diagnosed with a terminal illness, and when he found out what she’d done he gave her the guitar, telling her he wanted to hear her play it. By the way, he’s still with us today! The three songs chosen from her new album of course included the one that has put he on the map, so to speak, and has got played on country radio stateside ( no mean feat for female artist as I’m sure you all know!) “ A Little Dive Bar In Dahlonega” , the hilarious story behind this one being that all three co-writers were having the worst day ever when they turned up at the session ( broken wind shields and guitar strings, being dumped by your partner of three years in a parking lot and dropping your phone down a toilet the night before included) but they turned all this around after having a few beers and ended up writing this gem……which also references co-writer Jesse Rice’s past nightmare of breaking down in the middle of nowhere leaving Atlanta, and having to pull into small town Dahlonega to wait for the recovery truck where he waited in a bar and where he met the woman he ended up marrying! Her other two rounds saw her perform the title track from her forthcoming album “ Girl Going Nowhere” , a real “ middle finger” to her algebra teacher who told her that her ambition to move to Nashville and write songs that would be played on the radio was “ all very well, but you need to have a good back-up plan”! and “ American Scandal” which is possibly one of the most passionate songs i’ve ever heard and which Ashley performs as if her life depends on it. “ I’ve never been good at writing love songs” she said before performing this one….I just don’t believe that people can move mountains or keep their promise not to break their lover’s heart…this is what I think love should be like.

All three artist were incredible and got a deservedly fantastic response from us all, I could have honestly listened to another four rounds but of course all good things have to come to an end.

Leslie extended thanks to Erika for inviting the artists over for this wonderful event ( adding that disappointingly she had yet to see the Queen!) and I’d like to add my thanks to hers, I really hope this is a C2C tradition that will continue.