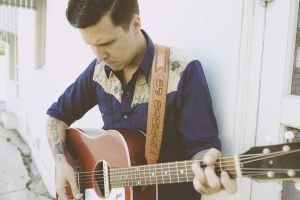 BJ Barham. American Aquarium. Hand on heart, had never heard of either ( BJ is the band’s lead singer/guitarist and wrote all the songs on their albums ) until a couple of weeks back. I was somehow made aware of BJ’s solo gig at London’s Borderline, checked out his music and was hooked from the start.
The night of the gig coincided with the UK release of his first solo album ( several weeks ahead of the US release date, makes a change!) and he told us how all the songs were written over a two day period last year when he and his band were caught up in the aftermath of the dreadful Paris terrorist attack. They were touring Europe and flights were in chaos, and while waiting to return to the States all the texts and messages BJ received from friends and family inspired him to put pen to paper and write about home. The resulting songs were so personal he decided they needed to become as a solo album, he started a pledge music campaign to help with funding and it was recorded live with minimal editing using several members from American Aquarium’s current line up and the same producer as the band’s last album ” Wolves” (which The Guardian included in their list of best alt-country albums of 2015). Instruments including accordian, banjo, violin, dobro and pedal steel provide the perfect melancholic accompaniment throughout the eight tracks.

Rockingham is the North Carolina county where he was born and spent his youth, and the album draws on his family and upbringing for general inspiration without being entirely autobiographical ( there are some fantastic family photos on the CD sleeve and insert by the way!). The pervading feelings through out are, to my mind, desperation and resignation, the inability to realise your dreams and the inevitability of life in a small town ( themes also explored to a certain extent on recent albums by Will Hoge and Brandy Clark but in BJ’s writing they are far more unrelenting and intense……. and when performed live he takes intensity to a whole new level! )
Resignation is definitely present in album’ s opener, ” AmericanTobacco Company” , which describes the daily monotony of work in the cigarette factory in his hometown Reidsville. ” Everyday ’round lunchtime I start daydreaming, my insides start screaming, wanting something more. Then I come crashing back to reality “. A song inspired by his grandfather, it continues …” I sit here in line and watch these big machines crush my hopes and dreams into Pall Malls and Lucky Strikes”.
The actual town gets its own song later down the track listing, with ” Reidsville” highlighting the lack of choices when growing up in a small town. The story of a couple ( and no doubt many more exactly like them) who were once “too young to know what this town had in store, and too much in love to give a god damn…..seems like our fate has already been sealed in Reidsville”. But as the years go by anger and frustration build up, the singer describes his wife’s eyes that once used to shine like rare stones as now being “darker than a funeral serenade” and says one day he will ask God why he gave up on the town. I’m not sure if it was BJ’s parent’s experiences that inspired that song, but it was his father’s story that gave rise to the title track, ” Rockingham”. I read an interview with BJ in which he said “I grew up in a farm town. My dad sold auto parts, ……. you don’t know you’re poor growing up. I didn’t realize my parents were struggling to make the mortgage payment.” This comes over so well here, the long hours and the struggle to “raise a wife and two kids off an honest wage” …….

But sometimes an honest wage just isn’t enough, and later on in the track listing is ” O’Lover ” a lament which tells of a farmer pushed to the limit, with crops failing he resorts to robbing a grocery store using his father’s revolver which he never plans to actually use, but things go wrong. Relaying what happened to his partner his desperation shows when he says “We only did what we did to survive”.
The closing track ” Water to the Well” is another that smacks of a farmer’s desperation, such a powerful song where this time the farmer has his pistol to his own head as he is feels he has exhausted all options….. ” What will I do when there’s no water in the well? What will I do when there’s nothing left to sell? ” He feels he has failed his family and can’t forgive himself. The haunting pedal steel accompaniment ( especially the outro ) is perfect.
Barnham’s bio makes interesting reading, he has successfully conquered addiction to both alcohol and hard drugs, is now happily married and “Madeline” provides some light relief on the album. It is written for the daughter he hopes to have one day, telling how she will change his perception of the world and offering her advice based on his experience including “never trust a man who does hard drugs in his thirties”, a line which got a cheer from the audience when I heard it played live!

Along with the other two tracks I haven’t mentioned ( not because they aren’t worthy, give “Unfortunate Kind” a listen https://youtu.be/dLgyp0DULuo) this is a fantastic collection of wonderfully evocative songs, really demanding your attention…..full of harsh realities it definitely isn’t your “happy, clappy, sing-along” type of album which I am sure you will have realised, but if you are a fan of the likes of Jason Isbell and Hayes Carll I think this will be one for you, well written and thought provoking with gritty vocals adding to its world-weary atmosphere. One of my favourite releases this year for sure!

BJ will be back in the UK early next year, touring here with American Aquarium for the first time, and I will definitely be hoping to catch one of their shows.