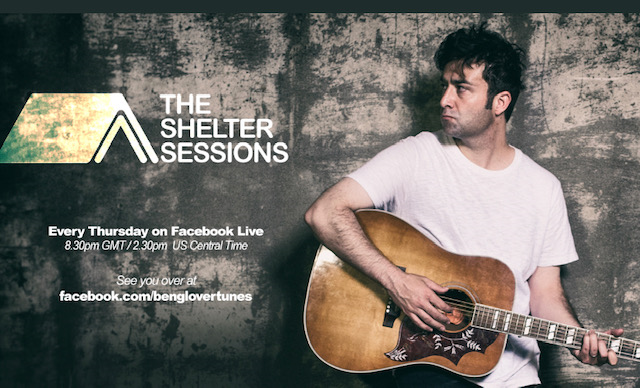 2020 continues to be a year full of surprises, some better than others, and the announcement of a new EP from Nashville-based Ben Glover definitely falls into the ” good surprise” category, not only for his fans but for the talent artist himself who hadn’t intended to release music this year! Glover explains that the cancellation of live shows due to the pandemic made him miss the creative connection they provided, and that ” in the early Summer I got on a writing streak and also revisited some older unrecorded songs. Spending time in the studio and recording filled that part of me that needed to stay engaged with creativity”.

The result of this creative burst is the fout-track EP ” Sweet Wild Lily” which will be released digitally via Proper Records this Friday, 13th November, and follows on from his 2018 UK Americana Album of the Year, ” Shorebound”.

Hailing originally from the village of Glenarm in County Antrim, Ben masterfully blends the music of his Celtic roots with that of his new home in the Southern States, and his profound, thought provoking lyrics are always written and delivered from the depth of his very soul.
His upcoming EP is no exception, consisting of the recently released singles ” Arguing With Ghosts” and ” Sweet Wild Lily ” as well as the tracks ” Broke Down” and ” Fireflies Dancing”. He has taken the production reins himself, working alongside engineer Dylan Alldredge and integral to the sound of the EP is the guitar playing of Colm McClean, Ben’s cousin and long time collaborator.
Talking of the recording process Ben says that instead of recording in intense, focus bursts as on previous releases this time round he let it take its own pace, spreading it out over several months …….” I felt that it gave the songs more time to come to life and give me more time to sense what direction we need to take them” .
Unusually for Ben, who is well known for his collaborative songwriting, two of the tracks here are solo writes, including the stunning title track which tells the story of a character trying to find her way back home to herself, a dilemma many of us have surely faced at some time in our lives and maybe even more so recently.

The other solo write, ” Fireflies Dancing” was written in thirty minutes this Summer while Ben was taking a break from Nashville and spending some time in Mississippi, and as the title suggests was inspired by a beautiful display of fireflies in the dusk as he sat on his porch there.
The two collaborative tracks were written by Ben alongside his good friend and Songwriting Hall of Fame member Gretchen Peters, who also features on backing vocals on ” Broke Down” , a song they wrote back in 2013 and which has just been added to the November playlists at BBC Radio Ulster and BBC Radio Foyle. In addition the wonderful Maraca Berg joined the pair to co-write ” Arguing With Ghosts” , which Gretchen also recorded for her 2018 album ” Dancing With The Beast” , and which this time round features the vocals of Grammy-nominated singer-songwriter Kim Richey. The first single to be lifted from the EP, it explores the themes of losing a sense of the familiar, grief and the passing of time…..which no doubt many of us have felt to some degree lately, I love it when a song’s lyrics and sentiments take on new meanings!

As well as keeping busy in the studio, Ben has been channelling his creativity and keeping in touch with his fanbase in recent months via his regular ” Shelter Sessions” lifestreams on his Facebook page Ben Glover Music, where you can find him playing originals and covers on Thursdays at 8.30pm GMT/ 2.30pm CT.

” Sweet Wild Lily” will be available to stream/download wherever you access you music this Friday, and can be pre saved on Spotify Here