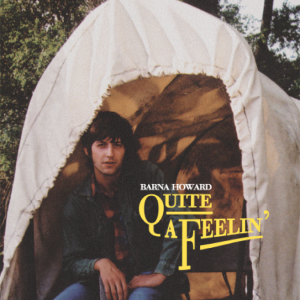 Barna is currently supporting Andrew Combs on his UK tour. After his Corby gig I managed to catch up with him for a quick chat…

CG: I don’t like seeing artists pigeon-holed into certain genres. You’ve been described as American Folk and Country respectively. Is there a difference between the two? Aren’t they both the same thing?

BH: I see them as the same generally. Moving in and out of both sonically is probably where the mix up happens. Americana works if I had to choose one word, but still … Sometimes I just say singer-songwriter.

CG: I’ve seen your music described as tender, mature and timeless amongst many other compliments. How would you describe your sound?

BH: I’ll go with that. The audience has more sway when it comes to that topic in my opinion.

CG: How does it feel when you hear your music being played in a film? (Drinking Buddies)

BH: It was definitely strange!

CG: Your album ‘Quite a feeling’ is quite beautiful frankly, I love it. What was the inspiration behind your second album?

BH: A lot of looking back I’d say. Selections from a journal I never kept.

CG: You grew up in Eureka, Missouri – a great name for a town! Is the ‘quintessential Midwest town’ upbringing as idyllic as it sounds?

BH: Yes indeed. There are still many stories I’ve yet to dig up.

CG: How do you feel when people liken you to Kris Kristofferson & Bob Dylan? Do you feel any pressure or does it not bother you?

CG: I see you studied animation before your music career took over. Was that your fallback plan if music hadn’t been an option?

BH: Music has always been there, though I didn’t know how far I wanted to go with it. Throughout my time in school, song-writing took hold. It may have been because of the big shift from small town Eureka, MO to Chicago. A lot of stimulation at once helps. Going to school was something I felt I had to do. No regrets however. I do some of that work on the side still.

CG: You are described as a wonderfully honest and magical storyteller (um, I think that was my description!). Country music is so unique for the recognition given to the songwriters. How important to you are lyrics vs the music?

BH: Lyrics are what I’m attracted to the most. The music is important because it holds them up. When I think about the songs that inspire me the most, lyrics always seem to be the thing that makes them work.

CG: Have you any thoughts about the recent comments regarding the ACM awards from Sturgill Simpson? I saw Margo Price’s post on Facebook the other day with the explanation of Johnny Cash’s ‘flipping the bird’ picture and it seems to me that things haven’t changed much over the decades?

BH: If it wants to change, I guess it will naturally. Haven’t gave that much thought.

CG: How do you find UK audiences? We get told that we listen instead of talking over the artists, have you found this?

BH: I’d have to agree. Not saying audiences in America don’t listen, it’s just more common. But yes, I am always amazed while in the UK when it comes to that.

CG: You live in Portland now. My oldest daughter is an avid devotee of The Goonies and has ‘Goonie Rock’ as her screensaver. Are you a Goonie fan? If not, what’s your favourite 80’s film and why?

BH: I am a Goonies fan, and also a big fan of Astoria, OR. If I had to choose, I’d say Heathers, or the first Back to the Future.

CG: What’s the one song you wished you’d written?

You can see Barna Howard supporting Andrew Combs on his UK tour. For more information check out:

HORIZONS FADE
I’LL LET YOU PICK A WINDOW
TINKER CREEK
I DON’T FALL MUCH, ANYMORE
SONG FOR JOE
PROMISE, I WON’T LAUGH
IT HURTS TO KNOW
PAT’S HOUSE
TURNS AROUND THE BOTTLE
TIMBER, NAILS AND TEARS