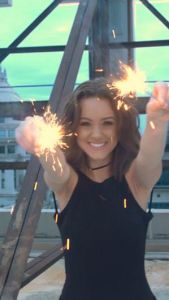 A groundbreaking new music video from Bailey Bryan perfectly supplements her infectious debut single “Own It.” Her danceable anthem is for anyone with self-doubt, awkward moments and imperfections. It’s a reminder that flaws and scars can also be beauty marks. Premiering on People’s Snapchat and on People.com today, Country music’s first vertical music video is optimally viewed on mobile devices as it reflects and integrates the 18-year-old’s generation’s dexterity with social media.

Produced by Green Shoe Studios, Bryan says both song and video are autobiographical — she’s wild but nerdy, awkward in conversation but “Shakespeare when I’m texting.” And her dance moves?

“I actually felt really good about that dancing and then I watched the video back and was like, ‘Well that’s perfect,’” Bryan says laughing at herself. “You kind of learn a lot of random things about me by the end of it — but more importantly the words in that song really are the message I wanna send to people.”

Lyrics to “Own It” were started two years ago when the Sequim, WA native brought a list of all the good and bad things about herself to a co-write and asked for help with a message that was motivational but not too serious. “Basically the lyrics to ‘Own It’ are everything I needed to hear at that point in my life,” Bryan adds.

They’ve proven to be lyrics others need to hear as well. Even before the song’s official release to radio later this month fans have started sharing their own “Own It” stories, many admitting how her song and surprisingly candid photos on Instagram have cast sunshine on dark insecurities.

The early attention earned Bryan one of three 2017 Grammy Artist of Tomorrow nominations, for which fans can vote through Feb. 8 as well as watch exclusive content and performances. For more information, visit www.baileybryan.com.