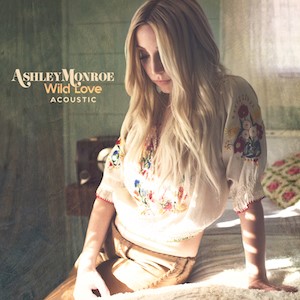 GRAMMY-nominated Nashville artist Ashley Monroe has today announced the release of a brand new EP featuring five acoustic versions of songs from her critically-acclaimed fourth album ‘Sparrow’, and shared one of the tracks – “Wild Love” (listen here). ‘Sparrow (Acoustic Sessions)’ will be released on 15th February 2019 and is available to pre-order now.

The Dave Cobb-produced album, which landed at #1 on the iTunes singer-songwriter chart was featured on a number of significant end of year lists, with Esquire, Billboard, Stereogum, American Songwriter, Nashville Scene and more hailing the record among the best releases of 2018.

Currently on a headline tour in the UK & Europe, with two sold-out dates in London and stops in Glasgow, Oslo and Amsterdam, Monroe noted the relevance of choosing today to release the first song and announce the new EP: “It means a lot to be releasing the acoustic version of “Wild Love” while I’m in the UK, because the song was inspired by my very first trip to London. The confidence everyone had made me feel so alive. The fans here in the UK really listen and appreciate music so deeply and it brings me such an energy to be back playing shows here.”

ABOUT ASHLEY MONROE:
Monroe has established herself as one of Nashville’s finest singer-songwriters, able to conjure emotion in unexpected ways and to always find the humanity just beneath the surface. Critical acclaim appears to be something that all of Ashley Monroe’s albums have in common. Like a Rose (2013), which included the sublime — and alternatingly bawdy and poignant — singles “Weed Instead of Roses,” “You Got Me” and the title track.

The Grammy nominated Blade (2015) followed with the soulful lead single “On to Something Good. The title track stands as the centerpiece of the album with an aching, career-defining performance, lingering over the payoff line: “You caught it by the handle, and I caught it by the blade”. Produced by Vince Gill and Justin Niebank, who also oversaw Like a Rose.

Sparrow (2018) turns Monroe’s life experiences into moody, orchestral masterpieces that explore all sides of a fully formed woman unashamed of her scars – the maternal tendencies, the childlike wonder and the sultry moments behind closed doors, as showcased on her single “Hands On You”. Recorded with Grammy winning producer Dave Cobb in the legendary RCA Studio A while Ashley was pregnant with her son Dalton.

Ashley has recorded with artists ranging from the Raconteurs and Train to Wanda Jackson, Vince Gill, Mat Kearney, Ricky Skaggs, Sheryl Crow and Butch Walker. She received a GRAMMY nomination for her No.1 duet “Lonely Tonight” with Blake Shelton, in addition to CMA and ACM nods. And it goes without saying that she is an indispensable component of the acclaimed supergroup, Pistol Annies.

CASSADEE POPE DEBUTS NEW SINGLE: “IF MY HEART HAD A HEART” FR...