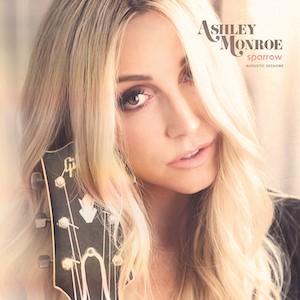 Grammy-nominated singer/songwriter Ashley Monroe returned to the UK & Europe in January for her highly anticipated sold out tour, performing songs from her critically-acclaimed fourth album Sparrow.

The tour kicked-off with sold out shows in Amsterdam and Oslo, where Ashley played the Interstate19 Americana Weekend. At Glasgow’s Celtic Connections Festival, her show had to move to a larger capacity venue due to overwhelming demand.  Her concert at Saint Luke’s inspired numerous fan responses on social media praising her performance.

Monroe concluded with two-sold out shows at Bush Hall where fans were treated to a spellbinding piano performance of “Orphan.” She also shared a cover of “La Vie en Rose” that eloquently segued into her own “Like a Rose,” demonstrating her masterful vocal ability to oscillate between emotions and captivate an audience at the same time.

“This tour was incredibly special because the songs on Sparrow were inspired by my very first trip to London,” Monroe raved. “The fans brought such a deep appreciation and attentiveness that reinvigorated my soul. I can’t wait to come back and perform again.” She concluded the sold-out run as a featured presenter for the International Artist of the Year Award at the UK Americana Award Show in London.

In addition, her brand new EP featuring five acoustic versions of songs from Sparrow was released everywhere today (LISTEN HERE). The Dave Cobb-produced album, which landed at #1 on the iTunes singer-songwriter chart, was featured on a number of significant year-end lists, with Esquire, Billboard, Stereogum, American Songwriter, Nashville Scene and more hailing the record among the best releases of 2018.

About Ashley Monroe:
Ashley Monroe has established herself as one of Nashville’s finest singer-songwriters, able to conjure emotion in unexpected ways and find the humanity just beneath the surface. Critical acclaim is something all of Monroe’s albums have in common: Like a Rose (2013), which features the title track alongside the sublime, and alternatingly bawdy and poignant, “Weed Instead of Roses” and “You Got Me,” and the Grammy-nominated Blade (2015) with its soulful lead single “On to Something Good.” Both albums produced by Vince Gill and Justin Niebank.

Sparrow (2018) turns Monroe’s life experiences into moody, orchestral masterpieces that explore all sides of a fully formed woman unashamed of her scars – the maternal tendencies, the childlike wonder and the sultry moments behind closed doors, as showcased on her single “Hands On You.” It was recorded with Grammy winning producer Dave Cobb in the legendary RCA Studio A while Monroe was pregnant with her son Dalton. All her albums received top country albums recognition by Billboard, Rolling Stone, The New York Times, Washington Post, American Songwriter, Esquire, Stereogum, Taste of Country, Amazon Music, All Music, Uproxx and Nashville Scene Critics Poll.

Monroe has recorded with artists ranging from the Raconteurs and Train to Wanda Jackson, Vince Gill, Mat Kearney, Ricky Skaggs, Sheryl Crow, Miranda Lambert and Butch Walker. She received several GRAMMY nominations in addition to CMA and ACM nods, and is also an indispensable component of the acclaimed super group, Pistol Annies.