You’re travelling all the way to Germany to see an artist who’s playing in the UK a few days later?” was the comment I got from several ( non country music loving! ) friends.

But I just couldn’t resist the opportunity to see Ashley McBryde and her amazing band Deadhorse play their first ever shows there, in much smaller venues than at home too ( 700 capacity as opposed to 2-3000 ) . And to seal the deal the opener in Europe was Ashley’s long time friend/co-writer Cheley Tackett, an artist I’m also a huge fan of…..a few clicks and everything was booked for my adventure.
Sitting at Berlin airport as I’m typing this, I can’t believe what an incredible couple of shows I’ve just witnessed. The energy from all the musicians was off the scale, the music of course was superb and it was such fun to meet so many country music fans many of whom had also travelled considerable distances. Their respect for both artists was a total pleasure to witness, and although their drinking was minimal there was still a fun, party atmosphere.  The sound, lighting and staff at both venues were top class…..The Mojo Club in Hamburg is relatively new, six or so years old and is interestingly totally underground, while Berlin’s  Colombia Theater is a converted army movie theatre, dating from the early 1950’s but remodelled as recently as 2015.

At both shows Cheley’s acoustic sets won audiences over from the start, not an easy task for an opener anywhere in the world, her deep powerful vocals and beautiful writing drawing everybody in….. you could have heard a pin drop during her emotional ballads. Hearing that some people were going to both shows her set lists were slightly different at each venue, but both were a great mix from her back catalogue and of course included what she has told me is her favourite song she and Ashley co-wrote ( along with the late Randall Clay) “ My Best Dress” which appears on her latest album “ Buckeye” alongside two more Ashley co-writes.  A really engaging performer, her personality is as big as her voice and her songs were interspersed with amusing and informative stories.  I loved how she had even written a hilarious Ashley tribute song especially for these shows which required ( and got! ) audience participation. The queues to meet her afterwards were testimony to all the new fans she made, if you don’t know of her music already please check it out ( www.cheleytackett.com) 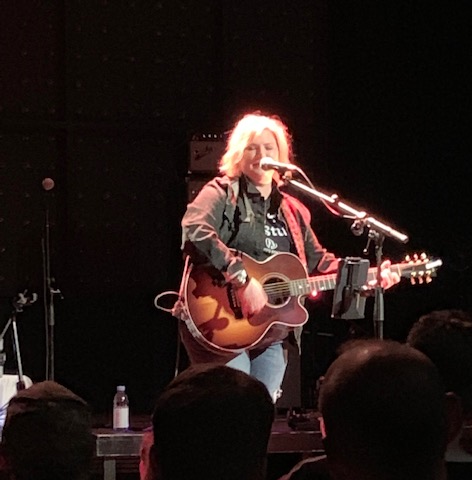 After the customary short break Ashley’s band filtered on to the stage, the opening chords of “ Living Next Door To Leroy” rang out and then the lady herself burst on to the stage to of course rapturous applause and cheers. Having seen Ashley together with her band only once before ( at C2C in London earlier this year where I was up in the gods and they were tiny specks!) it was a total pleasure to be able to witness their onstage rapport at close quarters at these shows.  Deadhorse are all the most amazing players, mesmerising to watch, and acoustic guitar player Chris Harris has a truly beautiful voice too, contributing harmonies as well as duetting really impressively at these shows on the Brooks and Dunn ballad “ You’re Gonna Miss Me When I’m Gone”, which Ashley sang so beautifully with Kix on the duo’s recent “Reboot” album. Yes, as much as I’ve loved the several acoustic gigs of Ashley‘s I’ve caught in the past a full band show always has a whole different dynamic and provides more flexibility with the set list. But Ashley never forgets all the years she toured relentlessly, just her and her guitar, and she played a few songs in this format during the middle of the sets on both nights. 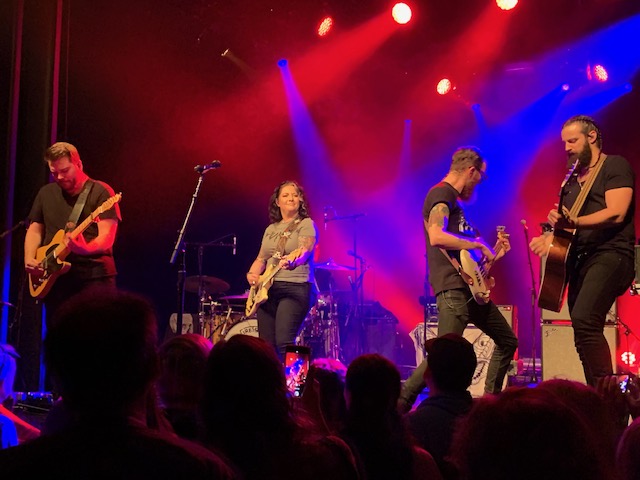 Set lists were pretty similar at both venues, with the exception of the acoustic portion where she included “ Fat and Famous” in Berlin at the request of some fans there, much to the delight of everyone it seemed. It was particularly brilliant to get to hear some new material which will be making its way into her next album, scheduled for release in early 2020. Naturally this included her current single “ One Night Standards” which may not have been as well known at these shows as when she’s been playing it Stateside recently but seemed to be an instant hit with the crowds ( such a catchy chorus )….Ashley introduced it as a love song which still seems up for debate with the aforementioned band member Chris ! Her trad country roots were evident in another new song “ The Last Thing I Need ” which was inspired by sitting hung over on her porch with co-writer Randall Clay who poured whiskey in her coffee and lit her a cigarette ( when she doesn’t even smoke!) . I love these tales behind the songs as did the rest of her fans who hung on her every word. Her blues/rock influences come out on another new song which we were privileged to hear and which I’m assuming is titled “ Ain’t Enough Water” and wow, when she and that band let rip it’s totally insane! Roll on 2020!
Even though English may not have been the first language for the majority of the audiences in Hamburg and Berlin that didn’t stop them singing along with her more familiar songs, “ Radioland” , “ American Scandal” and “ Little Dive Bar” in particular seeing fans in good voice. And of course there was the now customary cheer from the “ crowd” in her signature song “ Girl Going Nowhere” which ended her acoustic section, Deadhorse rejoining her on stage half way through the song. 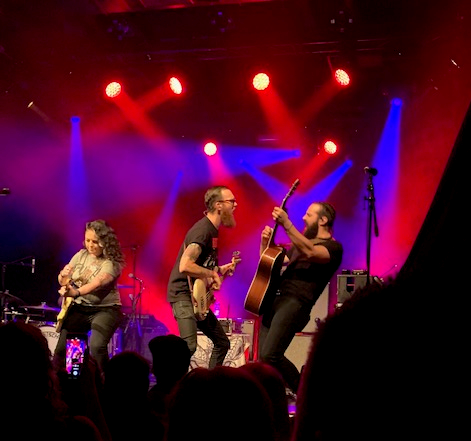 Ashley kept her guitar tech busy by switching between electric and acoustic guitars ( the latter was actually Cheley’s at these shows, her own having got damaged somehow en route from Switzerland where she’d played a festival immediately prior to Germany).  But she ditched both for her final song ( joking that she didn’t know how to sing without one ) which was her always popular stunning version of  “ Dirty Diana “ , not an obvious choice for a country artist but Ashley’s musical influences are widespread and this song suits her so well. It was an emotional powerhouse of a number to end with, Ashley taking the mic from its stand in order to give it her everything. Which is exactly what she did throughout the entire set….she not only does she write from the heart but performs from it too, at one point she said  “ if my hair doesn’t fall flat and my makeup doesn’t fall off my face I haven’t partied hard enough with you”. The memories of these shows are something that will remain with me ( and everyone else there, I’m sure) for a very long time.
“ As long as I have breath in my lungs I’ll continue to do this” Ashley told us in Hamburg….well, as long as I have breath in my lungs I’ll continue to catch her shows, wherever that may take me. …..apologies to my carbon footprint of course!
SET LIST
1. Livin’ Next To Leroy
2. Looking’ For A Buzz
3. Radioland
4. You’re Gonna Miss Me When I’m Gone ( cover)
5. The Jacket
6. Ain’t Enough Water ( new)
7.The Last Thing I Need ( new)
8. Bible And A .44 ( acoustic)
9. Luckiest SOB ( acoustic, Hamburg only )
9. Fat And Famous ( acoustic, Berlin only)
10. Girl Going Nowhere ( semi acoustic)
11. American Scandal
12. One Night Standards ( new)
13. El Dorado
14. Home Sweet Highway
15. Little Dive Bar In Dahlonega
16. Tired Of Being Happy
ENCORE
17. Rattlesnake Preacher
18. Dirty Diana (Cover)