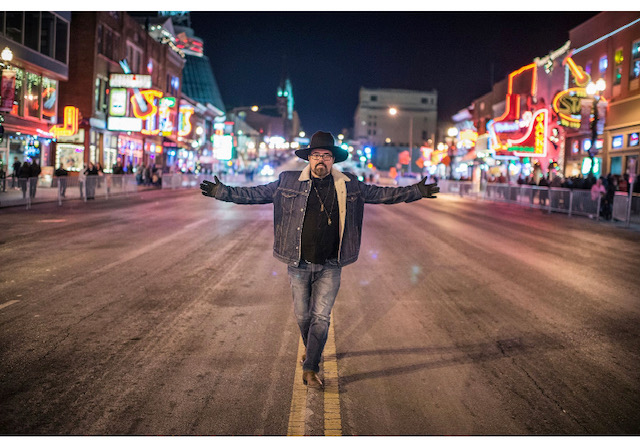 A passion project more than a decade in the making, Australia’s Andrew Farriss has finally released his self titled, self produced debut solo album today ( 19th March 2021) via BMG Andrew Farriss – Album (lnk.to)

Delayed even further by the twists and turns of 2020, in the interim Andrew put out a 5-track EP “ Love Makes The World” which has possibly worked in his favour by helping expand his fanbase beyond those who already knew him as founding member of chart-topping band INXS for whom he co-wrote all but one of their top 40 hits Stateside. First and foremost a songwriter, he is member of the Australian Songwriters Hall of Fame and has collaborated with many Australian artists over the years in both a songwriting and production capacity.

Living on the land and running a working cattle farm in NSW for the last 25 years, country music was never far from Andrew’s heart despite his career to date being firmly embedded in rock/pop but it took a trip to the Apace Pass along the Mexican border to set the musical direction for this album. He and his American wife Marlina are frequent visitors to the States, and spent several weeks with friends horse riding through the Chiricahua Mountains, the history of the area captivating Andrew in away he wasn’t expecting from the stories of the tumultuous fighting to the barren beautiful landscape. “I became quite enamoured with it, it became very real to me,” he says. “When I went back to Nashville, what I really wanted to do was write about that outlaw country that I just saw and the history of the area.” Tracking songs in music city at Larry Beaird’s studio almost a decade ago he initially had no intentions to release an album or even an EP, just wanting to make the songs sound as good as possible so he could play them to people, but it was when he listened to his voice as a country singer that “ it began to make sense to me. The pieces of the jigsaw fell together “.

The 12 track outlaw- inspired country/Americana album that resulted was recorded partly in Nashville, partly back in Australia at Andrew’s home studio, many of the tracks written years ago while others were penned during the recording process. Not being a lead vocalist he apparently found the prospect slightly daunting initially, especially when in the studio alongside more experienced singers but for me the grittiness of his far-from-honed vocals are all part of the album’s appeal and help give it the authenticity and atmosphere he was seeking. And thankfully he grew to enjoy the new challenges it seems, saying during the creative process “ I am really enjoying stepping out on my own with this album. I love writing songs that hopefully resonate with people. I have not followed any trends or formulas creating these songs. What I have written and recorded is different. I like different”.

It’s an album that really does incorporate a mix of musical genres, which is immediately obvious from the first two tracks. The introduction to its opener “ BountyHunter-Hummingbird” transports the listener to the wild west with its clever use of birdsong and horses hooves galloping across the plains over a sweeping orchestral string accompaniment and flamenco guitars. A bold decision to open an album with a ballad, this beautiful love song is absolutely mesmerising. A declaration of love in a very different style follows, “ Come Midnight” , a clever choice too as the project’s lead single in my opinion ( released back in 2019 before the delays hit !) as the up-tempo drum-driven track will have helped reassure his existing fans that Andrew hasn’t totally foregone his rock roots on this new solo venture and keep them intrigued for what else is to come.

Two more singles were released ahead of the album, “ Good Momma Bad” ( quite a funky vibe to this one!) and most recently “ Run Baby Run” , another that has a rockier edge production wise.
My two favourite tracks come back to back mid – track listing, ” Cajun Girl “ and “ Apache Pass” , the former a light-hearted tale of love at first sight set in a honky-tonk bar, its bluegrass style fiddle-playing just perfect, and the latter being in the same vein as the album opener in many respects, telling the tale of the afore mentioned horse riding trip which was so instrumental ( no pun intended) in sowing the seeds for this album. “ And we rode our horses through Apace Pass, felt the spirit of old Geronimo. Could almost see the arrows flying and hear the rifles firing” Andrew sings in the chorus … it’s a beautiful account that paints a fantastic picture and fires the imagination, demonstrating his storytelling ability so well.

All in all, I must say that like Andrew I’m a fan of “ different “ too when it comes to this album. it is one which is full of twists and turns style-wise, and as such is likely to have wide audience appeal, but one which still manages to have a cohesiveness. And of course a well-crafted song ( or twelve!) always wins me over !
More artist information at andrewfarriss.com where the album is also available to purchase in CD/Vinyl format.