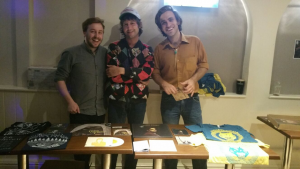 Around fifty people are gathered in The Viking Club in Corby in huge anticipation of the headline act, wondering how on earth Andrew Combs ended up here after playing to 20,000 at the O2 for C2C in March this year. The lights are low, candles flickering on the tables and the stage is swathed with blue curtains and ambient lighting. A picture of Gram Parsons is propped up on a chair on the stage, reminding you that this is a Grievous Angel Promotions gig, if you didn’t know it already. Being a club, the drinks are cheap and the atmosphere is beginning to buzz with the anticipation of the night ahead.

First up, Nottingham based Luke Whittemore takes the stage. He comments how quiet everyone is before opening up with ‘Level Crossing’. I think they are still in shock that Andrew Combs is in Corby. He thanks the eager crowd for coming out early to see him before breaking into ‘Nothing Beyond this Northern Town’. Luke’s song writing is both poetic and dramatic with beautiful melodies to boot. His sound is nothing like his East Midland roots but more American folk/country and his voice is both soulful & wistful but incredibly powerful. His songs paint stories that come alive with his vocals and we’re treated to a song not on the EP ‘Long Gone’. ‘If It Weren’t for the Rain’ follows and then a cover of a Donna Sears (from the Timejumpers) ‘So Far Apart’ – a bittersweet love song. Luke finishes with a soaring rendition of ‘Have Mercy’ which is written about his children and my personal favourite. Luke is a wonderfully honest singer/songwriter and I thoroughly recommend his ‘Northern Town’ EP available from Goldship Records. You won’t be disappointed.

‘Howdy, how y’all doing?’ Barna takes the stage, a boyish figure sporting a trucker cap and a colourful quilted print jacket. You just know he’s going to deliver an effortless performance of pure Americana charm. He’s eager to get started and as he waits for the house music to quieten down he gives a shout out to Luke and the appreciative audience deliver a well-deserved round of applause. ‘Promise, I Won’t Laugh’ off his self-titled debut album opens Barna’s set and I’m immediately struck by his Bob Dylanesque vocals and beautifully finger picked guitar which reminds me in places of Ralph McTell’s ‘Streets of London’. ‘Turns Around the Bottle’ and ‘Notches on a Frame’ follow, prompting a matter of fact story about his grandad and the fact that not only was he wearing one of his hats but that his grandad left him all his hats before he died. That hat on his head just turned itself into another one of his stories that he interweaves with his music. His honest and endearing tales of his life and journey from his home town to present home of Portland, OR have created the most heartfelt lyrics and wry observational skills. His delivery is effortless and composed and music melodic, upbeat and so damn easy to listen to. ‘Whistle Show’ reminds me of Cash – the music rolls easily along, all delivered in a laid back, ‘American cool’ fashion. ‘Corner of Your Eye’ is a new song and leads into ‘Quite a Feeling’ which is the title track of Barna’s second album. This is my favourite song on the album and live it doesn’t disappoint. Barna’s delivery is confident, relaxed, and intelligent and I can’t stop grinning at this point as this song makes me feel happy, without a care in the world as long as the music continues. The applause after this song is the loudest I’ve heard all night. ‘Hands like Gloves’ is a woeful tale of domestic abuse with heartbreakingly honest lyrics. Barna tells us of a dream he had in which he had 3 children and promptly wrote a song about it when he woke up. It’s no surprise if I tell you that I am in lyric heaven – the song writing in this song is incredible. Barna has no children but writes about his life with these kids with the most believable sincerity and detail, I was mesmerised. He has a sense of innocence about him, standing on the stage holding his guitar he looks almost child-like but with the wisdom that his Grandpa bestowed on him he is wise beyond his years. Fans of country folk will love Barna’s retro style and should head over to http://loosemusic.com/ to find out more information and get hold of his albums.

Andrew Combs takes to the stage with ‘Month of Bad Habits’ just as the barman decides to slam the till shut unbelievably loudly several times for good measure. The room is small so a sound like this is clearly heard but from the first couple of chords cascading from Andrew’s guitar all other sounds become irrelevant. Looking slim in blue jeans, shirt, tousled hair with a turquoise pendant under his shirt collar, he just mesmerises with his velvety voice. “Corby!” he jokingly exclaims, “I never thought I’d be here!” to much excited laughter and shouts of “us too!” from a crowd that are still pinching themselves as he plays ‘Rainy Day Song’ and treats us all to a song that “did not make it onto the new record but I still like it”. We like it too. Next comes ‘Suwannee County’ which is basically a fishing song as Andrew tells us how much he loves fishing and if I heard correctly, ‘fishing is my God’. Ok. Maddie & Tae’s ‘Shut Up & Fish’ is probably the only time I’ll be singing about fishing but tonight Andrew is my God so he can fish all he wants. His next song includes a fantastic ‘mouth trumpet’ which apparently his dad taught him to do (think Police Academy). He rocked that too. Announcing that his mum hates his next song ‘Too Stoned To Cry’ he asks the crowd how they’re doing, given that they’re out on a Friday night listening to 3 sad guys with their guitars! Cue much laughter, he’s a funny guy. It’s a fair review of the night from Andrew but those 3 sad guys are making the crowd of around 60/70 people extremely happy. How’s that for musical juxtaposition…

After a spellbinding performance where you could hear a pin drop he dedicates his next song to ‘his woman’ (he’s getting married soon) and the guitar reverberates with the passion of his strumming and soaring vocals. I love that this is counteracted with the following song which is really a ‘dirty hippy song’. ‘Please, Please, Please’ from Worried Man is next, ‘Foolin’ – a scathing song about social media and ‘Pearl’ which he describes as a song about stereotypes. It’s during this song that the realisation hits me as to why I am so passionate about music. Andrew Combs is completely captivating live, close your eyes and you are transported into his nebulous world – the music is stripped back, bare without his band and you could still be listening to the record, he is just such a flawless performer. He is so lost in his music he has no idea how long he’s been playing “could be 20 minutes, could be an hour and 20 minutes…”. A couple more tracks (including his girl’s favourite, a creepy song about a peeping tom) a Jeff Buckley like falsetto and Corby, Andrew Combs is leaving the building (well, not before he’s sold some merch, signed autographs and had a few photographs with fans). Simply sublime.

Grievous Angel Promotions really pulled out all the stops for this show tonight. The club looked great – this venue is the nicest one in Corby yet – and something the girls really appreciated included the sparkly toilet seats! The atmosphere was electric once the music started and the sound was great – courtesy of Mark Brennan. My only wish is that more of the locals would realise what magic is being created right under their noses and I have a feeling that after tonight, the penny might finally drop.

To find out more about his tour and music visit www.andrewcombsmusic.com 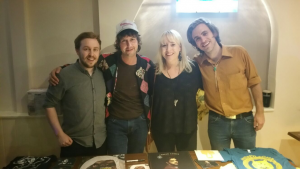