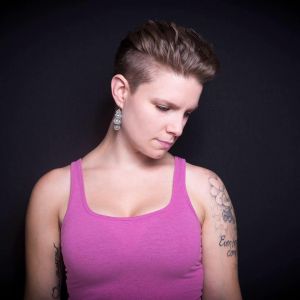 Amy played the Paddock stage of the Buckle & Boots festival Sunday afternoon, she followed the very popular ‘In the Round’ session, which had seen Jenn Bostic, Sonia Leigh and Jade Helliwell performing.  There were an awful lot of people at this session and as most of them were sitting in camping chairs I was hoping a lot of them would stay put to watch Amy.  Alas no, most of them did leave, but there was still a reasonable size crowd who did stay to watch her.

Unfortunately it took quite a long time for her band to set up the sound quality to their satisfaction.  I will say here though that Amy got let down by 1 of her band members and had to call in a replacement on Saturday.  She had gone to bed Saturday night not completely confident she was going to have a full band the next day.  When I saw her Sunday morning she had a very happy face on her!  She was going to have a full band and they were nearly on site!  1 of life’s little dramas that as a spectator you never give a 2nd thought to, you just assume that everyone is going to turn up to entertain you on time and all present and correct!

The guys looked great, they were all wearing black trousers/jeans, black shirt & red ties.  Amy herself was in a stunning red corset, which is a look that is going to stay in people’s memories!  I noticed a few familiar faces in the audience, including Jenn Bostic!  She & Amy are good friends, so it was good to see Jenn supporting Amy.

Finally, the band was happy with the sound check and Amy started her set with Don’t Push Me, Darlin’.  Introducing her next song Amy said she had wanted to write a song about why she does this.  She said she got into Country music late, but people like Dolly and Patsy Cline are her hero’s and she really looks up to them, which inspired her song Country Music.  This is a very clever track mentioning several artists and song titles, all with a very catchy tune.

Amy asked for a special round of applause for her bassist, the guy who had stepped in very last minute!  She then said “Oh, it is quite difficult to breath in a corset!”  Not sure that there was a man there that didn’t shout back “Take it off then!”  Ha ha!!

Amy said she her next song Numb was released in September and Bob Harris had featured it on his Radio 2 show.

Next up was a cover of an artist that is very popular with the Think Country team, Brandy Clarke.  Amy said she loves this song as it is such a fun song.  It was of course Stripes!

For her next song On the Outside Looking In, Amy acknowledged Jenn & said that the song was 1 she & Jenn wrote together, she said it doesn’t matter what it looks like, you don’t know what is going on on the inside or behind closed doors.

She then wished Think Country’s Annette’s dad Jim, who was in the audience a Happy Birthday, she then introduced her band.  She inadvertently started a fight between her guitarist and her drummer though, when she said her drummer had the best beard in Country music, her guitarist thought HIS beard was the best!  After the boys had finished arguing, Amy’s next song was written by Clint Daniels in Nashville.  The song was Bad For Me.

Amy thanked him & said like many other artists she wasn’t very good at self-promotion, I am guessing this is something artist & acts get more used to as they play to more people, I certainly remember telling Darren Hodson from The Southern Companion off the 1st time I saw him at his own gig when he didn’t have any CDs with him.  He has said he hasn’t made that mistake again!  The title track of the EP Love Shouldn’t Hurt finished Amy’s set and I know I wasn’t the only 1 who loved it!  This was Amy’s 1st time at playing a festival with a band, I am sure it will not be the last.  Amy has a beautiful sweet voice, even when she is singing about domestic abuse!  She also has a cracking sense of humour which makes her more interesting to watch.  I really hope to see more of her!

Love shouldn’t hurt is available on iTunes for £3.95