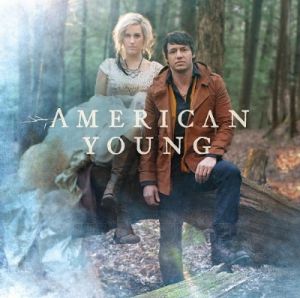 Kristy Osmunson and Jon Stone, better known as new country duo, American Young released their debut single ‘Love Is War’ to country radio back in 2013 through their label Curb Records. That wasn’t the starting point however, as both of these musicians are veterans in the industry, holding writing credits on tracks from some notable names (Lee Brice, Blake Shelton and Rascal Flatts) to name just a few. They’ve recently finished a string of European dates, which included a couple of performances at C2C alongside shows in Birmingham, Manchester, Germany and Italy.

Their sound reminds me of The Civil Wars and The Common Linnets.  A self-titled EP was released which contained five tracks.’ Love Is War’, ‘Ain’t Looking for Love’, ‘God Sends A Train’, ‘Soldier’ s Wife (Don’t Want You To Go)’ and ‘Saturday Night’. ‘ It was re-issued in 2014 along with a new cover art and additional songs. Only four tracks from the original release are present on the re-issued version, with ‘ Saturday Night’  being replaced by‘ The Thunder Rolls’  and ‘ Wasn’t Gonna Drink Tonight’ .

This track was a single back in 2014, it was written by Jon, Lee Brice and Billy Montana. Jon takes lead vocals here, however it’ s only once Kristy joins him we hear the real magic. Their voices blend together so perfectly as they sing lyrics to tell the story of a guy who wasn’t planning on drinking that evening, well until he saw his ex. Seeing her would have been easy if she’ d only broken his heart, but instead she “tore it all to pieces “this leads to emotions coming back and ultimately him drinking a little too much.

At just under three minutes long ‘ Ain’ t Looking For Love’ is the shortest song from the collection. Here Jon is pleading with a woman to “Save your kisses for the real thing baby “cause he ain’ t looking for love right now (even though she’ s a tempting prospect) It was written by Jon, Phillip Lammonds, John Ozier and I adore the little fiddle instrumental at the end.

With Kristy singing solo on the verses it gives her a chance to shine, with Jon only joining her for the (short) chorus “Sometimes God sends a whisper, carried in the rain, when we don’t want to listen, sometimes God sends a train “it’ s my favourite lyric overall from the EP and with Jon’s rocky edge it adds a little dynamic. It was written by Kristy and Bob Regan and is a firm favourite of mine.

This was the first track I ever listened to from these guys so with that in mind it’ all always have a place in my heart. The way in which they convey the lyrics would have you believe they wrote the song, when in fact it’ s the only track on the EP that neither of them had a hand in writing. Showing they can take a song and make it sound like one of their own makes this one that little bit more special.

This song is the clear standout for me, Written by Jon alongside Billy Montana and Hannah Blaylock it talks about a Soldier’ s wife not wanting her husband Togo off and fight in a war. That being said I think the opening lyric” I don’ t want to think about having today goodbye” can resonate with anyone having to say goodbye to a lover. Musically I love the way this builds up strength throughout, starting out with mainly piano and drums leading to something a little more rocky towards the end. I hope this makes the cut for the album.

Originally sung (and written) by Garth Brooks, American Young give us their take on this song. The song came about because Garth wanted to explore the concept of thunder rolling in and out of a marriage. These guys have done a good job taking on a song that isn’t their own botany opinion there are better songs on the EP.

Overall this EP is phenomenal and provides a strong introduction to American Young. It’s worth mentioning that the duo has some new tracks available on Spotify. There’s 12 tracks in total, including some picks from this EP alongside some new ones. Including ‘Point Of View’ which is set to be the next single. I predict these guys are going to be huge this coming year so go and check them out if you haven’t already.