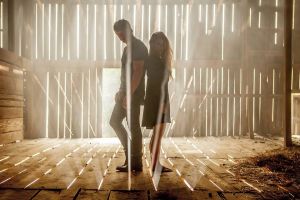 I’ll be totally honest here….I started off the night completely clueless! I had listened to and liked a few songs such as “Love Is War” and “My Point Of View” but that was the extent of my knowledge of American Young.  I didn’t know how many were in the band, what they looked like, how long they had been together.  They could have served me at the bar and I wouldn’t have known!

For those of you with the same amount of knowledge as me, American Young consists of Kristy Osmunson formally of Bomshel, and Jon Stone who is an established songwriter and producer.  Within moments of them opening with a cover of Garth Brooks “The Thunder Rolls” I knew they had just gotten themselves a new fan.

With quite a small crowd Kristy and Jon could easily have struggled to create any atmosphere, instead it was instantaneous.  The combination of Kristy’s amazing fiddle playing, the heavy drumbeat and the guitars was utterly spine tingling.

The set list kept the audience guessing, with constant changes of pace from the heart wrenching “Soldiers Wife” to the fun and quirky “Point Of View”, where the personalities behind the harmonies are showcased and you get a feel for how real the banter is between them both.

Their new UK single “18” is about taking the listener back to their “glory days” when they were young and carefree without the responsibilities of adulthood.  This has a great singalong chorus and everyone seemed to love it.

“Slow Ride” showed another different more soulful and sensual sound for American Young which concluded with some amazing guitar playing from Jon and Dan in the band.

In an unexpected twist their most well-known song the beautifully haunting “Love Is War” was mashed up with Cotton Eye Joe and surprisingly it worked!! Cotton Eye Joe sounded stunning, stripped back with Kristy’s haunting vocals.

They went from performing their own “Something To You”, a more simple traditional sound with a very catchy hook to a brilliant performance of Avicii’s “Wake Me Up”. They ended the set with the upbeat “American Dream” detailing the quintessential dream of unlocked doors, traffic free roads and beautiful sunrises. This image of a beautiful life we would all love, combined with outstanding fiddle playing definitely left the audience wanting more.

It’s easy to see why both Kristy and Jon have had such success in songwriting, having written hits for Blake Shelton, Kenny Chesney and Lee Brice.  I loved the performance of “Woman Like You” which Jon wrote for Lee Brice (who had a Number One with it) and Blake Shelton’s “Kiss My Country Ass” also written by Jon. Their songs cover quite original topics such as “What are you working for” about a Hispanic immigrant who works himself to the bone but has to send his paycheck to his family back home over the border. Their song “Be Here” covers a very timely topic and urges us to put away the technology and live in the moment, I just might put this on repeat for my husband!

By the end of the evening I felt that American Young had a very distinctive, almost hypnotic sound and I am struggling with how to describe that sound, as it seemed to change organically with each song.  Folksy, Celtic, Soulful, Country? What I can say it that their fabulous energy and gorgeous harmonies combined with emotive storytelling lyrics means I can’t wait till they return to the UK and I will be first in line to buy a ticket to their next gig.

I’d also like to mention Lynnie Carson, a Glasgow based singer-songwriter who performed before American Young.  She really captivated the crowd with her gritty vocals and thoughtful lyrics.  I couldn’t put my finger on who she reminded me of until a friend said Emmylou Harris.  He was spot on.